The 2022 Jaguars Backfield Breakdown is part of an offseason series in which I take a deep dive into one NFL team’s backfield and examine the respective rushing performances of the players in it. In doing so, I hope to gain insights into key players from a talent evaluation standpoint, and using that evaluation as a baseline, from a dynasty valuation standpoint. The first installments in the series covered the Patriots, Lions, Titans, Steelers, and Cardinals.

In an abysmal 2021 season mostly led by the completely defective Urban Meyer, the Jacksonville Jaguars ran the ball 392 times. That total was the third-lowest mark in the NFL and nearly 60 attempts below the league average.

Those low carry numbers were not the result of a philosophical commitment to throwing the ball, however. According to rbsdm.com, the Jags were the sixth-most run-heavy team in early-down, neutral Game Script situations (when win probability for either team did not exceed 80-percent). They also ran the ball more often than expected (based on league-wide play-by-play data) in most down-and-distance situations, and 2-percent more often than expected overall. Jacksonville wasn’t running the ball much, but not because they didn’t want to. They just sucked.

Meyer is obviously out (as is his interim replacement, Darrell Bevell). Doug Pederson now steps into the head coach chair. As offensive coordinator of the Kansas City Chiefs and then head coach of the Philadelphia Eagles, Pederson’s offenses have finished in relevant rushing metrics as follows: 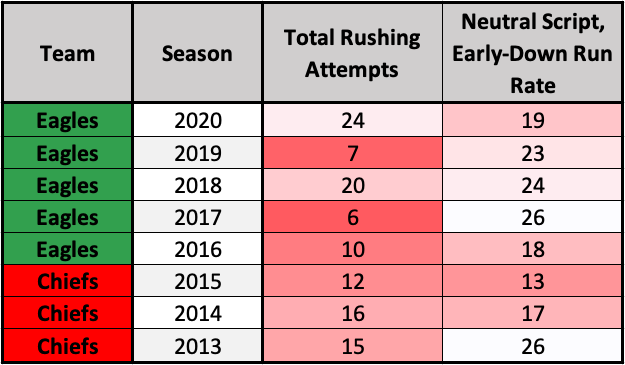 Only once in the last decade has a Pederson-led offense been willing to run the ball more often than league average in neutral Game Script situations. Pairing that pass-friendly philosophy with the strong possibility that the Jaguars are once again trailing in most of their games next season probably means that we shouldn’t expect high carry totals out of Jacksonville in 2022.

First round rookie Travis Etienne went down with a Lisfranc injury during the preseason. Afterwards, the Jaguars turned to the undrafted James Robinson as their lead back for the second season in a row. Along with him, five other runners — Carlos Hyde, Dare Ogunbowale, Ryquell Armstead, Nathan Cottrell, and Mekhi Sargent — saw work on the ground in Duval. Here are their full rushing efficiency profiles from last season:

Hyde and Ogunbowale were the main ancillary runners for the Jags last season. Neither were very good. Despite seeing lighter box counts than the other backs on the team, both of them averaged around a yard per carry less than their counterparts. That inefficient play produced BAE Ratings in the 42nd and 34th-percentiles, respectively. They were even worse from a consistency standpoint, with Relative Success Rates in the 20th and 10th-percentiles, respectively.

Armstead missed almost the entire year with complications from a COVID infection. But he was awesome in the two games he played in at the end of the season. Granted it was on only 15 carries. But he posted a BAE Rating in the 97th-percentile and an RSR in the 90th-percentile. He did a lot of that damage on a 26-yard run against the Browns. Even without that play though, he was more efficient than both Hyde and Ogunbowale. And RSR is a consistency metric that isn’t thrown off by long runs, so he was legit there either way. Allow me to start the #FreeRyquell movement.

The big takeaway here should be that our guy J-Rob is a beast. Among players who led their teams in carries last season, Robinson finished No. 4 in BAE Rating and No. 5 in RSR.

James Robinson is a legitimate talent and one of the best pure runners in the league. Last season marks the second straight year that he’s led an NFL backfield while posting positive team-relative efficiency numbers. His BAE Rating and RSR marks in 2020 were in the 54th and 90th-percentiles, respectively.

The problem for him is two-fold. First, Travis Etienne is set to return this season. As a first round pick with a strong resumé as a high-end college runner, he should reclaim the RB1 chair. Second, Robinson himself suffered an Achilles tear in December and who knows when he’ll be back to full health.

There are a lot of moving parts in this backfield that make it difficult to navigate in dynasty, but I view that more as an opportunity than as a problem.

Travis Etienne is one of the best running back prospects to come out in recent years. I’m betting on the combination of modern medicine and his talent to deliver on a very palatable RB17 price tag in dynasty startups (per DLF).

James Robinson is a two-time RB2 finisher in PPR points per game who has fallen to the RB37 spot in startups. You will never get a better opportunity to grab a proven stud who has yet to reach his 24th birthday. We obviously don’t know what will happen with his recovery from this injury. But we play the upside game by zigging when consensus zags. He’s being taken after Devin Singletary for Pete’s sake.

Finally, Ryquell Armstead isn’t even being taken among the top 98 running backs in dynasty right now. If Robinson isn’t ready by September, it’s just Carlos Hyde, Nathan Cottrell, and Mekhi Sargent after Etienne under contract. You could do much worse with your final taxi squad spot than a 25-year old workhorse-sized runner who was dynamic on his touches last season after posting positive team-relative efficiency in college.

The Jaguars backfield is a mess, but I love the slop. There’s upside to be had for those with the stones to take it.