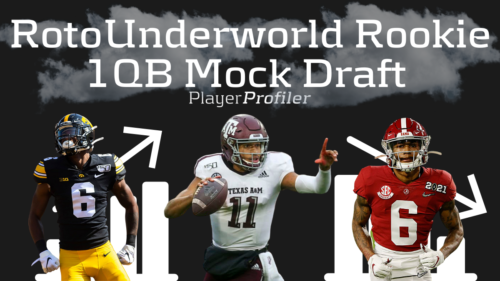 Six wide receivers were taken in the first seven picks of Round 2, with Zach Wilson being taken at the 2.03 to break that run up. I don’t love reaching on Wilson here because he is currently parked at No. 25 overall in our rookie rankings. However, I love Jaylen Waddle at the 2.01 and Terrace Marshall at the 2.05. These two receivers are jumping into roles with high target potential in 2021.

There were seven running backs that were taken off the board in Round 5, including Chris Evans, Kylin Hill, and Khalil Herbert. I love all three, and think they can see playing time in 2021. My favorite pick of the last round has to be Ihmir Smith-Marsette. The Vikings do not have a clear WR3 and I predict that ISM will see lots of targets as long as defenses are focused on Justin Jefferson and Adam Thielen. 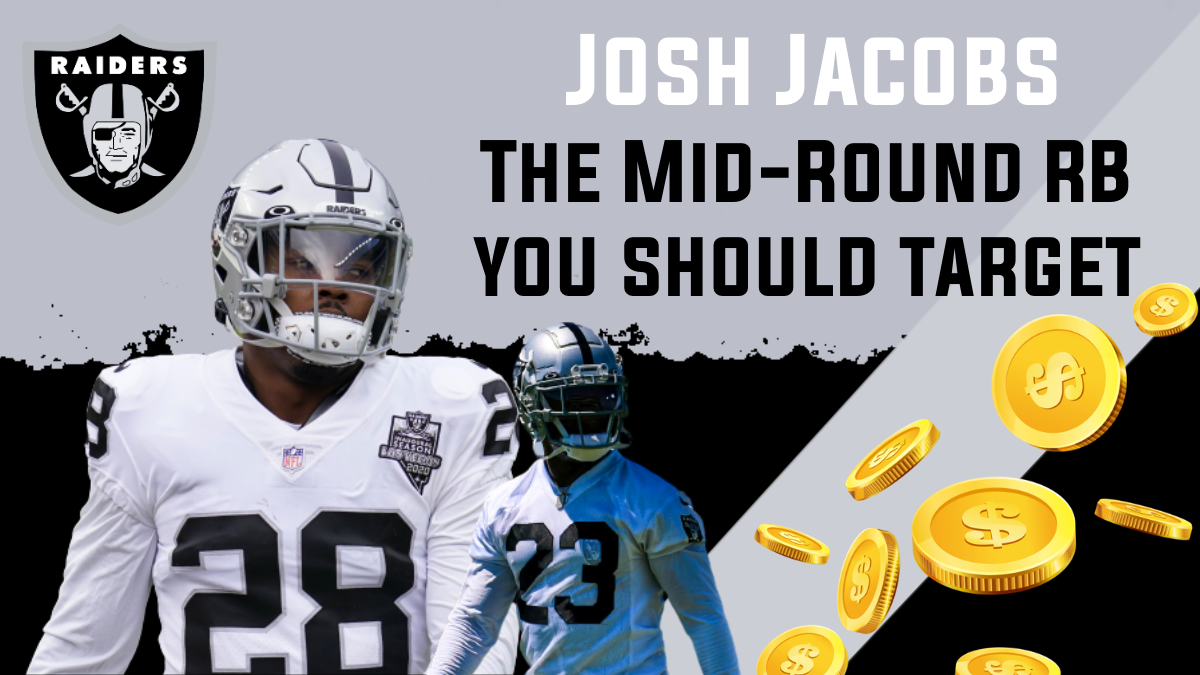 Josh Jacobs: The Mid-Round RB You Should Target

As far as fourth round running backs, it can be argued that Josh Jacobs, who often falls into the fifth round, provides the best value compared to similarly drafted players in Mike Davis, Travis Etienne, and Myles Gaskin. His locked-in goal line usage can lead to explosive, week-winning games. And his guaranteed 13-17 carries per game will buoy his floor, meaning he is a safe RB2 with top-15 upside.

Jacobs has historically thrived despite a crowded backfield and a weak line because of the insane number of opportunities he receives. While Kenyan Drake’s addition will likely take some touches away, in a 17-game schedule and with the league increasingly adopting a committee approach, this dampening effect will be minimal. Jacobs will continue to be a talented, volume-driven runner behind a line which is sneakily better than the unit rolled onto the field last year.

There’s always the chance that a fear-based run wipes out more of a position than expected in a given SFB11 draft. This is why adaptation and improvisation are the words of the day. Though you’ll want to end up with one of our CORNERSTONE QBs if possible, it will be easier to overcome a run on elite QBs than it will to overcome a run of elite TEs, mainly due to the sheer volume of points being given up when passing on an elite option.

Eight quarterbacks were selected in the first round of this exercise. All of whom have some Konami Code to their game. And all of whom we’ve identified as the difference-making QBs we need to target in most seasonal league formats. But not all of these QBs should be considered first-round SFB11 values over certain skill position players given the structure of the rules. In fact, SFB11’s scoring settings boosts players like Tom Brady, Aaron Rodgers, and Kirk Cousins. 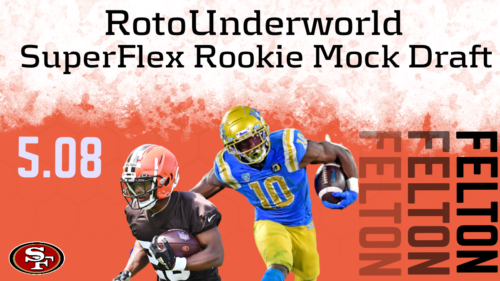 Zach Wilson is an NFL starter from day one on an ascending Jets offense supported by a revamped supporting cast featuring former first round pick Corey Davis and rookie Elijah Moore. Mac Jones has already narrowed the gap between himself and Cam Newton such that the two are reportedly in a full-blown QB competition to start training camp. It should not surprise anyone if the 2021 season ends and either Wilson or Jones are the highest valued player taken in the first round of this mock.

Jacob Harris has received some buzz lately, converting from wide receiver to tight end. He makes for an intriguing dynasty practice squad stash in the event he is able to make the conversion. Another player’s positional development that will be interesting to see is Demetric Felton. Cleveland’s rookie running back played in both the slot and behind the line of scrimmage in college. He may have a quicker path to fantasy relevance if he converts to wide receiver. 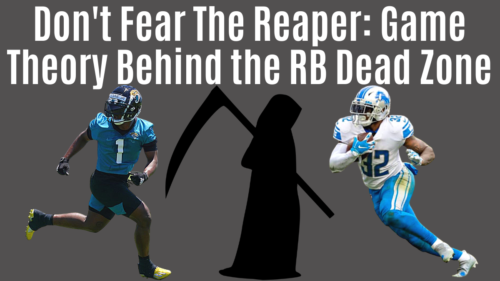 Any pick you make in earlier rounds has ramifications for later round selections; this is part of the opportunity cost. If you take Josh Jacobs at pick No. 45 as your RB3, this makes later round options such as Gus Edwards, Zack Moss, or A.J Dillon less impactful to your team. You become more likely to forgo them for receivers. If Jacobs is your first or second running back it’s more justifiable, but it becomes a question of floor vs. ceiling, and you are choosing the wrong answer.

There are several rushers with youth, pass catching and RB1 upside going rounds three through six in 2021. With two elite RB classes, 2017 and 2020, still at peak value, top end talents are being pushed into the dead zone. Gone are Leonard Fournette, Le’Veon Bell, Todd Gurley and Melvin Gordon. Enter explosive options such as Miles Sanders, D’Andre Swift, and Travis Etienne. 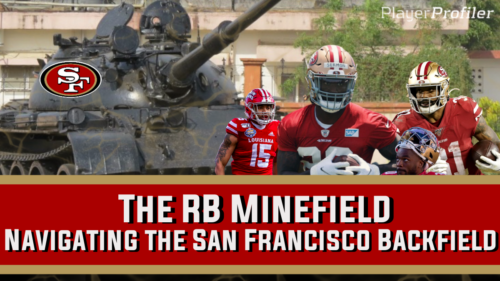 Seeing Jerick McKinnon’s prevalence for the 49ers offense amidst injuries is important because it shows that there is a place of relevance for a pass-catching running back in San Francisco. While Raheem Mostert and Jeff Wilson were efficient with their targets, they did not receive enough to be top fantasy RBs. A physical runner and learned pass-catcher with Kyle Shanahan and Trey Lance’s trust is the key to unlocking an RB1 from the San Fran backfield.

RBs can quickly fall out of Kyle Shanahan’s favor. However, they can also quickly fall in favor, because he tends to utilize a “hot hand” approach more than a “bell cow” approach. Raheem Mostert and Wayne Gallman have the experience to heat up, while Trey Sermon has the size and Elijah Mitchell has the athleticism. However, will they be used enough in the passing game to warrant fantasy RB1 status? 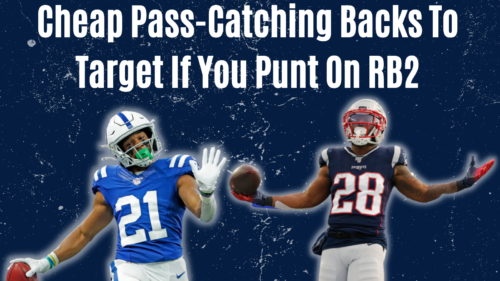 Cheap Pass-Catching Backs To Target If You Punt On RB2

James White averaged 8.3 (No. 46 among qualified running backs) Fantasy Points Per Game last season. While that’s nothing that’ll get the group chat talking, his 17.8-percent (No. 3) Target Share and 4.4 targets per game might. Opportunity is king. And when you double up with a message saying the Patriots targeted backs at a league-leading 29.2-percent clip, some chatmates may throw you a like. 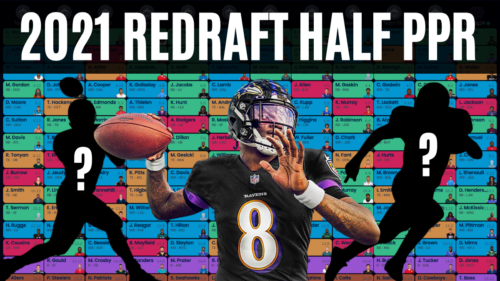 Lamar Jackson was the last remaining player in my first tier of quarterbacks. He has proven his generational rushing talent year after year, putting up an insane 1,005 (No. 1 among qualified quarterbacks) rushing yards and seven (No. 4) rushing touchdowns on 159 (No. 1) carries in 2020. His floor as a rusher alone should easily make him a QB1.

Michael Pittman’s upside at WR51 is undeniable. His early-second round draft capital is significant, and he gets a theoretical upgrade at quarterback from Jacoby Brissett to Carson Wentz. In the 12th round, I’ll take the chance that a player with a 111.2 (93rd-percentile) Speed Score and 10.25 (89th-percentile) Catch Radius breaks out in Year 2. 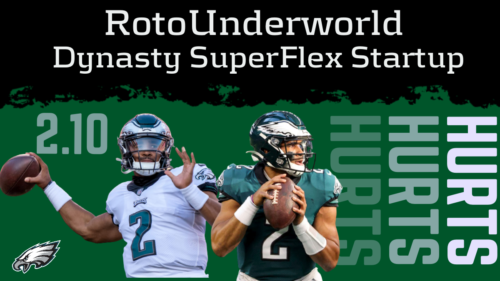 Only 11 of the top 21 picks in this SuperFlex startup draft were quarterbacks, including two rookies in Trey Lance and Trevor Lawrence. Jalen Hurts and Justin Fields were available here in round two, while D’Andre Swift and A.J. Brown were also on the board. Due to this league’s settings requiring only one running back to start, that position should be discounted. Hurts’ rushing ability gives him league-winning upside, so I chose him here to lock down the QB position.

Michael Thomas in the fifth round feels wrong. If Jameis Winston is under center, he will have the kind of league-winning upside that he showed in 2019. With Taysom Hill at quarterback, his ceiling is a little bit lower, but he is still a top receiver in the league. The only real mark against him in dynasty is his age, but he is younger than Davante Adams and DeAndre Hopkins, and only a year older than Tyreek Hill, Stefon Diggs, Allen Robinson, and Mike Evans. 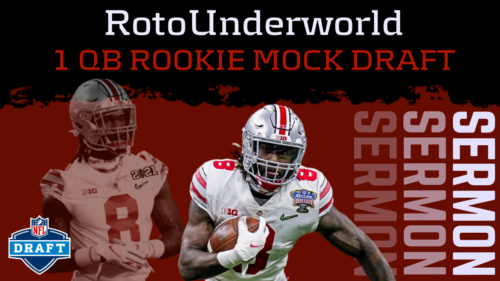 Amon-Ra St. Brown and Nico Collins jump up the board after landing in super shallow receiver rooms. St. Brown can seize a phenomenal opportunity to be the alpha in Detroit with his 86th-percentile Burst. Not to mention that he also checks the boxes for upper-percentile College Dominator Rating (62nd-percentile) and Breakout Age (91st-percentile).

Seth Williams is the biggest faller in this round after going at the 3.07 in the previous mock. Sixth round draft capital to a team with a crowded wide receiver depth chart sunk the value of what was once a coveted prospect in this circle. Though his upper-percentile College Dominator Rating, Breakout Age, and Speed Score give him the potential to break out regardless of his situation.

READ MORE
A RotoUnderworld Production
Proud partners of the