When you search the Internet Service for “Zero RB” you get 103,000 results. Shawn Siegele’s draft strategy that specifically accounts for running back fragility has reached heights of popularity that I would imagine have exceeded Siegele’s wildest expectations.

Zero RB Before it was Cool

Books have even been written by written by fantasy analysts recounting their success implementing the draft strategy. But, a funny thing happened to Zero RB during its meteoric rise as an approach to winning fantasy football drafts: it has become incredibly difficult to execute. Two years ago, a Zero RB enthusiast could mine value in every round by zigging while league mates zagged.  Here’s how it used to work:

Today, the fundamental competitive advantage gained from the strategy when it was originally conceived — its uniqueness — has largely dissipated. In a two year span, number of wide receivers drafted in the first round on MyFantasyLeague.com has increased from two to five. Like with most industries, competitors have widely adopted the Zero RB approach, killing it with popularity.

Shawn Siegele foresaw this a year before the market corrected when he published Zero WR and the Robust Lineup.  Siegele has managed to stay one year ahead of the competition, and he has reaped the high stakes leagues championships in the process.

But, was Zero RB ever truly an optimal strategy regardless of its level of popularity at any given time?

When RB Resilience is Optimal

Work by AJ Bessette and Greg Meade on Rotoviz.com utilized a Monte Carlo Simulation to suggest that in draftmaster/best ball formats, Zero RB is not an easily-executed fantasy draft strategy.

The Monte Carlo technique is a way to simulate actual events as many times as you have the computing power for by leveraging the power of random number generation and expected point distributions. Basically, you have a set of possible outcomes for every player in every game they play. Monte Carlo simulation takes a random number, say 0.78253746, and equates that to the 78.2537th percent best score that player could get that week. That is done for every player on your roster using different randomly generated numbers, and then the team score is optimized via best ball rules. We then ran this simulation 500,000 times to eliminate the huge levels of variation you see in any given week, allowing us to see the true optimal decision.

According to Bessette and Mead, more league-winning rosters started drafts with an RB-TE-RB-RB-RB sequence than any other sequence. They found that drafting a running back with four out of the first five picks was the easiest path to victory in 2014.

Optimal early round positional draft sequence for MFL10s according to AJ Bessette and Greg Meade. 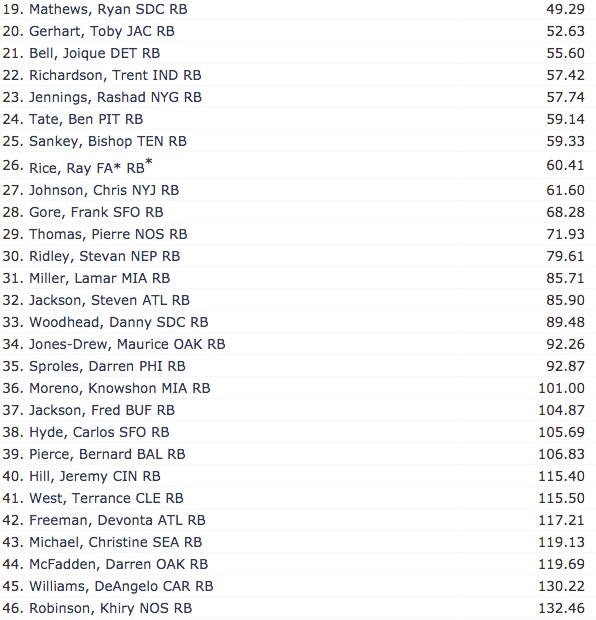 Amazingly, even though their fantasy point output was set at a higher standard, the early round running backs busted at significantly lower rates over the past two fantasy football seasons. The data suggests that if you are able to secure a high-floor/lower risk RB1 such as Eddie Lacy or Demarco Murray in the early rounds, regardless of league format, that is a sound tactic. The out-of-fashion is once again fashionable.

In 2015, with Zero RB omnipresent in draft rooms, workhorses from Marshawn Lynch to Matt Forte to LeSean McCoy are also available in the late-first and early-second rounds. The incentive to implement Zero RB has vanished with its popularity, particularly in MFL10 and other draftmaster/best ball formats.

Why is the league format paramount? The Monte Carlo simulation referenced above was specifically applied to MFL10 draftmaster/best ball leagues. The format does not allow in-season transactions (draftmaster) and automatically optimizes starting lineups each week (best ball). You draft your team, and then set the auto-pilot. Easy.

MFL10 leagues are frequently referred to as “best ball,” but that nomenclature is oversimplified — optimized lineups do not make the MFL10 format unique. What makes this format so different from traditional fantasy football leagues is the fact that MFL10 leagues are draftmaster, which do not allow in-season transactions.

Zero RB with No Wire: A Dangerous Tightrope Walk

The best ball feature of MFL10s allows drafters who stockpile RBs early to still stitch together competitive weekly WR performances from a mix of high floor veterans and volatile first and second year wide receivers that typically populate the middle rounds of fantasy drafts. Best ball reduces the need for week-to-week predictability by taking advantage of the occasional WR1 weeks achieved by second, third, and fourth tier receivers throughout the season.

While the oft-discussed best ball aspect of MFL10s certainly enhances the value of sub-tier 1 wide receivers, it is the draftmaster aspect that most significantly mutes the effectiveness of a Zero RB strategy. Owners in draftmaster formats are prohibited from acquiring deep sleeper running backs who ascend to the top of their respective teams’ depth charts. Justin Forsett and C.J. Anderson helped very few draftmaster rosters in 2014. Without this precious supply of waiver wire league winners, the fundamental assumption driving the success of Zero RB (numerous under-the-radar running backs rise to fantasy relevance each year) is nullified without access to a pool of free agent players. The draftmaster aspect of the MFL10 format renders Zero RB a mission impossible strategy in an MFL10 context.

Outside of draftmaster/best ball, however, Zero RB will continue to be a league winning tactic in traditional leagues that allow in-season moves. How can Zero RB be a league winning strategy if it starkly conflicts with the optimal lineup generated by a computer simulation based on 500,000 historical rosters?

Fantasy football will always have multiple paths to victory, but avoiding busts is a critical component of any stratagem for any league format.  Fantasy gamers feeling trepidatious about the bust potential of the flawed options at running back in 2015 should absolutely implement a proper Zero RB approach. This year is particularly devoid of running backs with a LaDanian Tomlinson-in-his-prime value-over-stream proposition – Eddie Lacy and DeMarco Murray may not receive enough carries to justify a first round selection, Adrian Peterson and Marshawn Lynch have eclipsed 2000 carries on their respective odometers and Matt Forte’s efficiency declined significantly in 2014. All-the-while, a bevy of elite wide receivers in their uber prime from Dez Bryant to Antonio Brown to Julio Jones to Demaryius Thomas dance like temptresses wooing recruits to their Zero RB cult.

The purest form of Zero RB has been successful, because it minimizes exposure to potential RB bust candidates. The bust rate data suggests that rather than throwing darts at risky backs or backs with limited upside in rounds 5-12, it would be wise to audible to a pure, particularly strident version of the Zero RB approach when the flow of the draft dictates it. This means waiting until the rounds turnover into the double digits before drafting a running back. Then, focus on stockpiling the roster with lotto ticket handcuffs such as Josh Robinson, sneaky PPR contributors such as Dan Herron, and unheralded uber-athlete grinders such as Andre Williams. Indeed, a bench stocked with Robinson, Herron, Williams, Jonathan Grimes, Javorius Allen, Jerick McKinnon, and Knile Davis is precisely what a proper Zero RB roster looks like.

While I contend that Zero RB should be completely off limits in draftmaster/bestball formats, in traditional league formats, Zero RB remains on the table though it is not my first strategic choice. So far in 2015, I have found myself happily zigging (drafting running backs early) as my traditional league mates zag (soaking up one wide receiver after another). But if I ever find myself in a retro league where my competitors are fervently gobbling up RBs in the early rounds, I will gladly pull the Zero RB lever. Moreover, I will not be slow playing my Zero RB hand. Rather, I plan to go all-in, going full commando style Zero RB with no mid-round RB underwear.