Hopefully you were stashing Quincy Enunwa.

The signs have been there for months.  From his preseason performance to the Jets cutting third-year tight end Jace Amaro.  We even touted him in this week’s piece on waiver wire trolling.  Everything about the Quincy Enunwa career arc suggested it was only a matter of time before he began to make a fantasy impact.  He was the kind of upside play you should’ve been stashing on the end of your bench if you had the room.  And currently sitting at 19.11-percent ownership in MFL redraft leagues, it suggests that not enough of us were.  If you were a Zero RB drafter who had enough depth to weather the Keenan Allen storm, he and Tyrell Williams should’ve been your top priorities.  But if you were able to get him for free in advance of Thursday night with everyone in your league passing over him on waivers, then you’re feeling pretty good right now.  If not, you need to hope that his rib issue and the fact that he was kept under 100 yards receiving is enough to scare people off of him so you can claim him.

These kinds of post-waiver roster additions can have a bigger impact on fantasy teams than given credit for.  They’re the kinds of players with the upside that can win you weekly match-ups.  In some cases, they can have enough of a lasting impact to win leagues for their owners.  And if you can beat the waiver rush by a few days and acquire them for free, before they have the chance to blow up, it’ll go a long way towards helping you achieve your goals of world domination via the fantasy football medium.

All listed players are owned in less than 50-percent of MFL redraft leagues.

What does Josh McCown have that makes him an attractive streamer with weekly starting upside? The same thing he had when called upon last year. Volume. The fewest number of pass attempts he managed in a full game was 32, and he peaked at 51 while having two more games above 40. If Week 1 was any indication, the Cleveland defense hasn’t improved enough to keep the same thing from happening this season.

With Travis Benjamin and Gary Barnidge as his top weapons in the passing game, Josh McCown was still a top-20 fantasy point-per-game scorer last year.  And his efficiency metrics could’ve been a lot worse for a QB who was forced to throw the ball 292 times in eight games (15th in the league with 36.5 attempts per game).  Apart from once again having Barnidge and pass-catching specialist Duke Johnson at his disposal, he’ll also be able to better utilize the abilities of Odell Beckham-looking rookie Corey Coleman and recommended Week 2 start Terrelle Pryor. The Baltimore defense held Tyrod Taylor and the Buffalo passing game in check in Week 1, but McCown may get enough volume in this and future games for that to not matter too much.

This one is more of a long-term play for owners with deeper rosters who can afford to stash a player for upwards of a few weeks.  Before going down to a torn ACL, MCL and patellar tendon last year, the Cowboys were using Lance Dunbar more than he’d ever been used in his professional career to that point.  He recorded 21 catches on 23 targets in only four games played.  Expected to start the year on the PUP list, Dunbar has returned to the field far quicker than anyone could’ve imagined.  What’s more promising is that he out-snapped Alfred Morris 17-14 in Week 1 against the Giants. 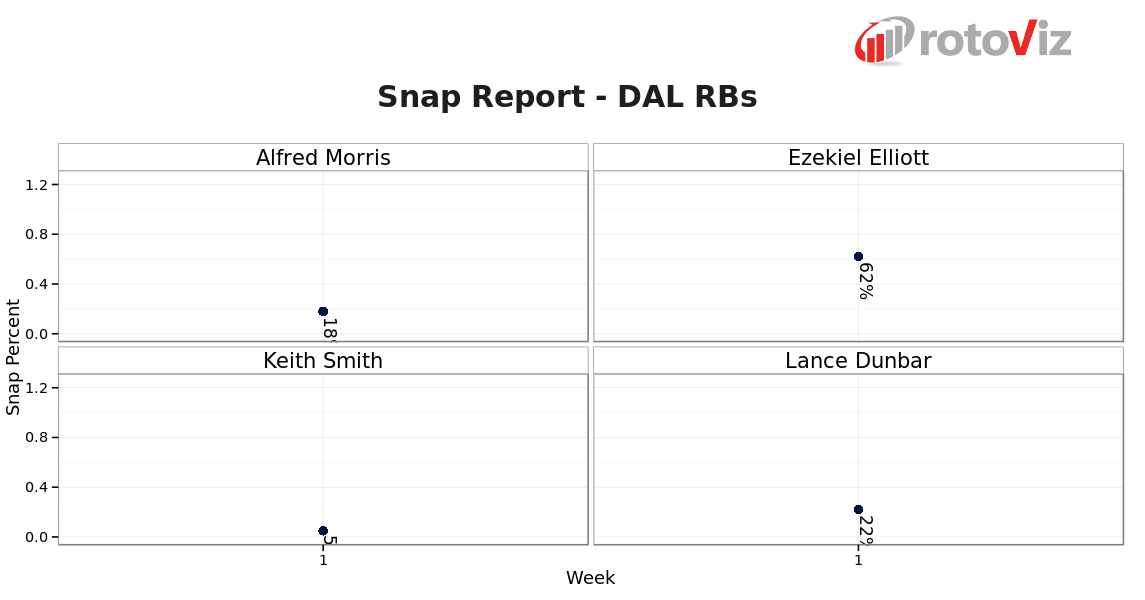 While Ezekiel Elliot was drafted to eventually be an every-down workhorse, it’s interesting to see that he and Lance Dunbar each recorded two passing game targets in Week 1 against the Giants.  But if you have a talent as dynamic as Dunbar can be in the passing game, he needs to be used.  And he could come in useful if Dallas begins to find themselves in negative game scripts more often, especially once he starts rounding back into game-playing form.  He’s a long-term hold, but he can be a huge pickup if he can begin recording some Theo Riddick-like performances.

Eddie Royal is the ideal kind of bench stash. A proven veteran who capitalizes on the opportunities given to him while the players ahead of him in the pecking order fail to do so. It’s easy to jump to conclusions after one game, but a look at the Kevin White career arc gives us the right to be skeptical. White’s history of underperforming his athleticism seems to be resurfacing at the NFL level, while the same can’t be said about Royal after one week of action.

Aside from last year when he recorded near-league-bottom efficiency, Eddie Royal has been one of the league’s most efficient receivers for the last few years.  He recorded positive Production Premiums of 16.5 in 2014 (18th in the league) and 39.3 in 2013 (3rd in the league).  He may not have the upside of Tyrell Williams, Eli Rogers or Quincy Enunwa (all of whom were likely acquired off waivers in your league.  Go get them ASAP if they weren’t).  But Royal, while being more of a safe bench stash, could pay dividends if the injury imp continues to strike the WR position.

With Zach Ertz being week-to-week with a rib injury and out for this Monday night, significant opportunity should open up for either Brent Celek or Trey Burton.  Carson Wentz not only displayed great efficiency in his NFL debut, he also targeted the tight end position eight times (with Ertz receiving seven).  As to which tight end will become more fantasy relevant in Ertz’ absence, my money is on the 10-year veteran who recorded top-5 scores in every relevant efficiency metric across 12 games last season.

It’s been speculated that Trey Burton will take on a bigger role in the Philadelphia offense while Zach Ertz is out.  But as a QB-turned-move TE in only his third year in the league, with a mere three catches on his NFL resume, I can’t bet on him to have a bigger fantasy impact than Brent Celek.  A below average athlete with below average college production, his best physical attribute is one that Celek also has working in his favor: above-average weight-adjusted agility.  Like with Eddie Royal, sometimes the safest option is the one that pays off the most in the long run.  And depending on how long Ertz is out, Celek could pay off with a few big games for needy fantasy owners.