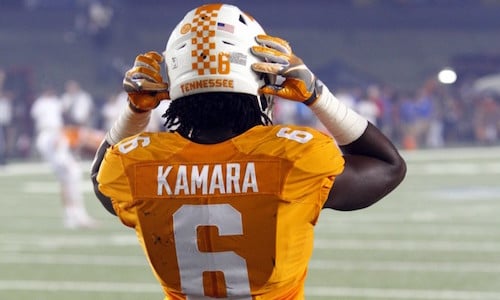 The 2017 NFL Draft class is starting to make a name for itself. Several rookie’s are in line for big games this week, including our beloved Aaron Jones. On the flip side big name veterans such as Marshawn Lynch and A.J. Green have difficult situations put in front of them given their advanced stats and metrics profiles.

Alvin Kamara has been on an absolute tear as of late, finishing as a top-10 running back in three out of the last four weeks. His matchup against Tampa this week makes too much sense to not start him. The Buccaneers have been an absolute mess on defense this year, ranking No. 23 in scoring defense and No. 25 total defense. In addition, they are allowing +1.90 (No. 10) fantasy points above the mean to opposing running backs.

Kamara has the ability to hurt the Bucs in multiple ways. He’ll have an easy time running behind the Saints excellent offensive line, which currently rocks a 123.7 (No. 1) Run Blocking Efficiency. Kamara’s true threat comes as a receiver, he currently is a top 10 running back in targets, receptions, and receiving yards. Kamara is a must start this week, especially in PPR league’s.

The Aaron Jones hype train should continue to roll against the Lions this week. With the Packers still adapting to life sans Aaron Rodgers, the Packers will likely implement a run heavy game plan against the Lions. Detroit has allowed +2.40 (No. 8) fantasy points above the mean. It’s only gotten worse since Haloti Ngata was lost for the season with a bicep injury after week 6, with Mark Ingram and Le’Veon Bell shredding them in recent weeks.

The Packers offensive line currently has a 116.9 (No. 2) Run Blocking Efficiency. Giving Jones 30 plus carries this week is an obvious path to victory that Mike McCarthy will take advantage of. Jones is a sleeper pick to be the No. 1 fantasy back in Non-PPR leagues this week.

Jeremy Maclin has had a quietly good campaign in his first season with the Ravens, and he should continue to roll this week against the Titans. Maclin is hot off his best game of the year which saw him finish as a top 15 receiver for the first time all season. His matchup this week against rookie corner Adoree’ Jackson is particularly favorable.

Maclin should be able to bully Jackson with his superior size (Maclin is 6-0, 198-pounds. Jackson is 5-10, 186-pounds). Jackson has been average at best in his rookie season, earning a +0.05 (No. 42) Coverage Rating. The uber efficient Maclin doesn’t need a lot of volume in order to turn in a good performance, as evident by his +24.9-percent (No. 17) Target Premium. Expect the established vet to expose the rookie this week.

The Giants have had issues against slot receivers all year, and their struggles will continue this week against Cooper Kupp and the Rams. In the Giants last game against the Seahawks, Doug Baldwin absolutely roasted them to the tune of 9 receptions for 92 yards and a score, with much of his work coming from the slot. Kupp lives in the slot, playing 59.6-percent of the Rams offensive snaps from there.

Across from Kupp will be washed up vet Dominique Rodgers Cromartie, who has completely fallen off a cliff this season. Rodgers-Cromartie has fallen 90 (Yes, 90!) spots in Coverage Rating this season, after earning a +0.46 (No. 5) mark last season, to a -0.69 rating this year. Kupp will absolutely feast this week.

Entering the season, Marshawn Lynch was probably the biggest unknown in the league. Unfortunately for Oakland, he’s hasn’t panned out as they would have liked. He’s currently averaging under 40 yards per game, and is woefully inefficient as noted by his -23.0 (No. 64) Production Premium. Magnifying the problem is that Oakland’s very expensive offensive line has fallen off a cliff (No. 28 in Run Blocking Efficiency).

Lynch is tempting to start against Miami because of the huge game Alex Collins had against them last week. Collins performance has been the exception, not the rule for the Dolphins this year, as they currently rank 8th in the league in rushing defense. Expect the depressing Beast Mode comeback tour to chug along again this week.

Eddie Lacy got an artificial boost to his fantasy stock this week after Pete Carroll announced that he’d receive the bulk of the carries against the Redskins this week. Don’t let the coaches words fool you, Lacy has been awful this year and it won’t change this week against Washington.

Lacy has reflected poorly in every metric imaginable, from his -48.9 (No. 79) Production Premium, to his minuscule 6.6-percent (No. 88) Dominator Rating. Some of this blame falls upon his below average offensive line and their 57.8 (No. 22) Run Blocking Efficiency. Regardless, neither group should rebound against a solid Washington defense that’s allowing +0.50 (No. 14) Fantasy Points above the Mean to opposing backs.

A.J. Green has been his typical, All-Pro self this season, that all changes this week when he runs into the wide receiver buzz saw that is Jalen Ramsey and A.J. Bouye aka RamBo. Ramsey has been transcendent for the Jags this season. He’s the No. 1 ranked corner on Player Profiler, with an excellent +0.39 (No. 8) Coverage Rating.

The Jaguars defense has been the best against the pass this year in every way imaginable. They lead the league in sacks per game, passing yards allowed, and are allowing -9.33 (No. 32) Fantasy Points below the Mean to receivers. Keep Green on the bench this week.

Demaryius Thomas is in the midst of one of the worst years of his career. Plagued by bad quarterback play, Thomas has yet to score a touchdown. He’s been woefully inefficient, posting a -13.4 (No. 65) Production Premium and a -15.8-percent (No. 69) Target Premium. His QB Rating when targeted is also an abysmal 55.4 (No. 89).

The Eagles do have a suspect pass defense, ranking No. 27 in passing yards allowed per game. However with Brock Osweiler under center this week, there’s no reason to believe that Denver will rebound. Continue to keep Thomas on your bench.