Robby Anderson was never expected to be the WR1 in Carolina when he signed with the Panthers, but it’s happening. He has out-targeted D.J. Moore 35 to 32 through four weeks with the team using him in a more dynamic role than he ever saw with the Jets. Anderson’s 35 targets rank No. 7 among qualified wide receivers, good for a 25.4-percent (No. 11) Target Share. He has a 33.8-percent (No. 12) Air Yards Share, ranks No. 6 with five Red Zone Targets and 2.78 Yards Per Route Run, and lands in the top-three with 177 (No. 2) Yards After Catch and a 2.86 (No. 3) Target Separation mark. 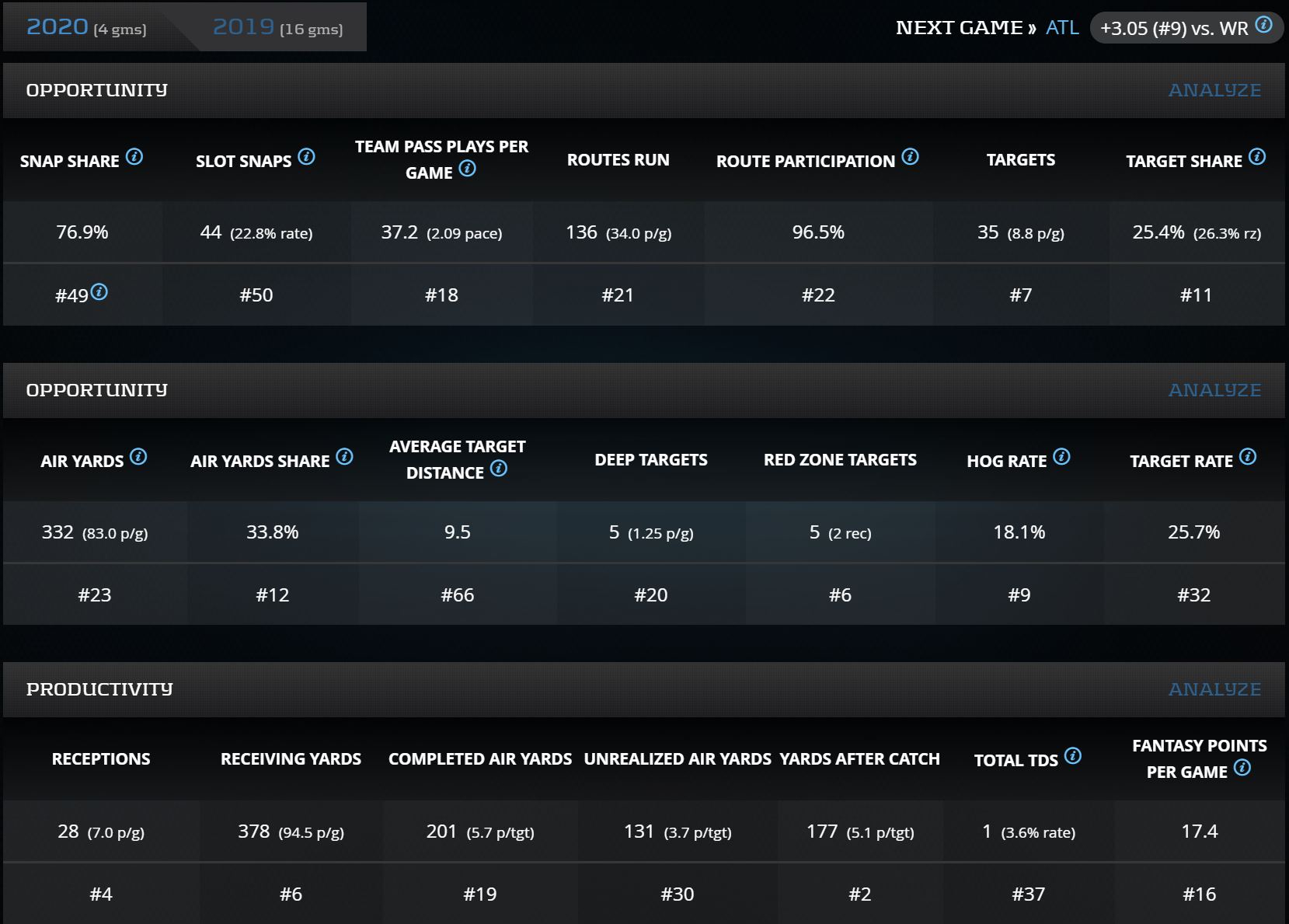 Anderson draws a Falcons defense in Week 5 that has allowed the second-most passing yards through four weeks. Atlanta’s secondary is dealing with injuries to Keanu Neal (hamstring), Ricardo Allen (elbow) and Darqueze Dennard (hamstring). We already know he can explode for big plays and big games. Week 5 sets up perfectly for a massive outing and, get this, he’s still under $6,000 on Draftkings.

In this same Panthers-Falcons game, we can find another great bargain in Olamide Zaccheaus, who is priced at the WR minimum. Zaccheaus is coming off a team-high nine targets on Monday night. He turned those into eight receptions for 86 yards. He took advantage of Julio Jones exiting early with a hamstring injury while the Packers put all of their attention on containing Calvin Ridley. The second-year receiver from Virginia actually led the Falcons with 33 routes run on the night. That’s after garnering a 79-percent Snap Share the week prior when Russell Gage left with a head injury, catching four-of-six targets for 41 yards in that contest. Zaccheaus should continue to see plenty of volume for as long as Jones is out.

The Falcons average 44.2 (No. 3) Team Pass Plays per Game with no indication of slowing that pace anytime soon. They’re likely to find themselves in another shootout in Week 5 with a total points over/under of 54.5 against Carolina. Zaccheaus profiles as an effective slot guy who is best comparable to Jamison Crowder. The ceiling may not be as high in regards to explosive plays for what we like in GPPs. Still, the pieces are in place for him to far out-produce his $3,000 cost on Draftkings, which ultimately makes him a great play even in tournaments.

Darius Slayton has been quiet since catching six of nine targets for 102 yards and two scores in Week 1, but it’s not for a lack of opportunity. He has a 100.0-percent (No. 1) Route Participation through four weeks and is No. 16 among wide receivers with 29 targets. He has 360 (No. 17) Air Yards and six (No. 4) Red Zone Targets, showing that he’s seeing volume and valuable looks. It’s only a matter of time until he explodes for another big performance. Week 5 sets up nicely to be the week where that happens.

The Cowboys have allowed the second-most Fantasy Points per Game to wide receivers. Given how good the Dallas offense has been, Game Script should point to a lot of passing from the Giants side. Slayton will see many of those looks and is priced at a mere $4,800 on Draftkings.

It’s worth monitoring Laviska Shenault’s hamstring injury before making any lineup decisions, but his ability to practice Wednesday even in a limited capacity indicates he’ll be a full-go on game day. With that assumption, he’s a great play in Week 5 at $4,500 on Draftkings. He’s coming off a career-best 86 receiving yards while hauling in five of six targets in last Sunday’s 33-25 loss to Cincinnati. His routes have increased every week as his role has expanded in a better-than-expected Jacksonville offense. Against the Texans in Week 5, he will draw coverage from PlayerProfiler’s No. 68-ranked cornerback in Vernon Hargreaves. The Jaguars use Shenault quite a bit as a runner, too. At just $4,500, it’s worth getting him in some lineups knowing that this can be the massive breakout week.