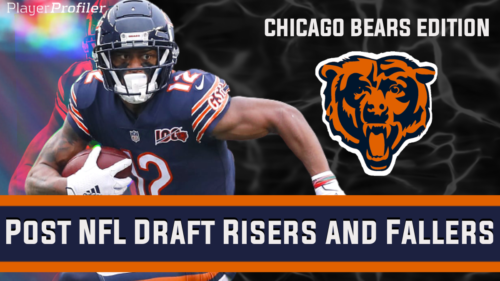 Now that the 2021 NFL Draft is in the rearview mirror, it’s time to take a look at players who were the proverbial risers and fallers on their respective teams. Today we take a look at the Chicago Bears, using PlayerProfiler’s advanced stats and metrics to help aid us in the process.

At 5-10 and 222-pounds, David Montgomery does not boast great metrics, but has become Chicago’s workhorse RB through toughness, determination, and elusiveness. His 449 Yards Created metric, which measure yards above and beyond what was blocked, ranked No. 4 among qualified running backs in 2020. His 4.1 Evaded Tackles Per Game was the No. 13 mark. As a team, they scored the league’s sixth-fewest team rushing TDs, with Montgomery averaging 0.5 (No. 24) Goal Line Carries Per Game. Despite the team’s inability to get to the goal line, he managed to score 10 (No. 10) total touchdowns.

In 2020, the Bears moved to an outside zone blocking scheme. This seemed to fit Montgomery as he really took off in the second half in the year, ending the season with six consecutive 100-yard games, scoring one or more touchdowns in all of them. While the schedule definitely softened during this run, he finished the season with 1,070 (No. 5) rushing yards, offering up seven games as an RB1 and four more as an RB2.

Looking ahead to 2021, the Bears neither drafted an RB early nor did they pay up for a high-priced free agent.  Instead, after trading up for Justin Fields, they spent their next two draft picks to bolster their offensive line – moving up in the second to nab First-Team All-Big 12 tackle Teven Jenkins and All-SEC second teamer Larry Borom in the fifth.

Is David Montgomery for real? 🤨 pic.twitter.com/WhnwXKV7sh

Newly-acquired Damien Williams, almost identical in size to Montgomery at 5-11 and 222-pounds, might seem like a risk to Montgomery’s workload. He’s familiar with Matt Nagy’s scheme from their time together in Kansas City and played for OC Bill Lazor in Miami. But he has never carried a heavy workload. In college, he never posted a 1,000-yard season, putting up a modest 20.0-percent (34th-percentile) College Dominator Rating and 5.3-percent (31st-percentile) College Target Share at Oklahoma. Both he and Sooners running mate Brennan Clay went undrafted. In only one of his six NFL seasons has Williams averaged more than five carries or three targets a game. Even in his breakout 2019, his sixth year in the league, he only had four regular season games with more than 15 touches.

If Williams, now 29 years old, is again given his more typical five carries a game, he’ll almost exactly replace Cordarrelle Patterson’s workload in the backfield, leaving Montgomery with the 15-plus carries a game he has seen in each of his first two years.

The Bears signed Williams to the 21st-highest free agent running back contract in 2021. With Montgomery’s performance to date, barring injury, there’s no reason to expect a significant workload for Williams. If Fields is the tide that will lift all boats as expected, the Bears and Montgomery will see more red zone opportunities to offset any potential reduction in Target Share with the return of Tarik Cohen.

Allen Robinson has never played alongside a top QB. In his two dominant seasons at Penn State, he hauled in 1,000-plus receiving yards per year and scored 17 TDs at the receiving end of passes from Matt McGloin, who would go on to throw 11 TD passes and 11 interceptions across his four-year NFL career, and Christian Hackenberg, who has no NFL stats.

Robinson was selected in the second round in 2014 by Jacksonville, where he met up with Blake Bortles. By his second year, he was the team’s No. 1 target, pulling in 1,400 yards and 14 TDs. He continued to shine in 2016 even while Bortles ended up No. 26 in passer rating. After tearing his ACL and missing 2017, he signed with the Bears. He has continued to average 1,000 yards per year despite continuous subpar quarterback play.

Andy Dalton, signed by the Bears this offseason, was announced as their expected 2021 starter. At least before the NFL draft, that is. He is 33 years old and has put up numbers no better than Mitchell Trubisky’s over the last few years, despite his having a much better receiving corps throughout most of his career.

Compare those metrics to Trubisky’s, for whom the Bears infamously traded up in 2017. In his one year as a starter at North Carolina, he led the Tar Heels to an 8-5 record and a third-place finish in the ACC’s Coastal Division. His metrics included a unsettling 22.0 (15th-percentile) Breakout Age and lower QBR and College YPA scores than Fields – despite his facing off against ACC competition.

There are no other WRs like Robinson on Chicago’s roster. He’s 6-2, 220-pounds. He’s fast – with a 103.2 (78th-percentile) Speed Score, athletic – with a 129.8 (87th-percentile) Burst Score, and he has a 10.28 (91st-percentile) Catch Radius. Their other receivers – Damiere Byrd, Marquise Goodwin, Darnell Mooney and newcomer Dazz Newsome – are older, tiny and/or late-round special teams candidates with average-at-best measurables. Anthony Miller and Riley Ridley don’t matter.

To share a shocking statistic, according to Pro Football Reference, the highest career QBR for any Bears QB in history belongs to… Mitchell Trubisky.

Fields doesn’t face much of a hurdle to become the best Bears’ QB ever. Robinson will explode once partnered with him.

The Bears trading up for Justin Fields crushed Andy Dalton’s value – even in redraft.

Hot seat GMs and head coaches who trade up for a QB in the first round are going all in on that pick. This playing field is not even close to level. It doesn’t matter if Dalton wins some games or looks adequate. Ryan Pace‘s and Matt Nagy‘s entire coaching staff’s jobs are perfectly correlated with Fields’ success this year.

Justin Fields went 20-2 since 2019 at Ohio State, losing to Clemson and Alabama in the CFP 🔥 pic.twitter.com/0IKLUKtG5Q

Dalton is a 34-year old, now average-at-best QB on a one-year deal. Per Pro Football Reference, he hasn’t been in the top half of QB rankings in the last four seasons. He doesn’t run. We could look further into his metrics but it really doesn’t matter. If Dalton starts all 17 games and/or Nick Foles has to come in, the GM and head coach will be fired and the new coach will not move into 2022 with Dalton at the helm.

Expect the Red Rifle to start early in the year and then Fields to come in if Dalton struggles or the Bears hit a relatively soft spot in the schedule. Based on 2020 win percentages, the Bears will face one of the tougher 2021 schedules. So, expect early struggles. Matchups against the Lions or Vikings or non-divisional home games against the Giants or Bengals will be good candidates for Fields’ first start.

Improvements to the offensive line and the Bears’ adding a couple late-round skill-position players are of value only to Fields.