Welcome to Going Long. This is the newest weekly series at RotoUnderworld, where we leverage PlayerProfiler’s advanced stats and metrics to identify one player at each position that fantasy football gamers can start in a pinch.

Through two weeks, the Atlanta Falcons have allowed the most fantasy points to opposing quarterbacks. While they have faced Russell Wilson and Dak Prescott, this was also a unit that allowed the sixth-most fantasy points to quarterbacks in 2019. Through two favorable matchups, Mitchell Trubisky currently ranks No. 15 among qualified quarterbacks in Fantasy Points per Game, just outside QB1 territory. He’s recorded 14 (No. 6) Red Zone Attempts, eight (No. 9) Deep Ball Attempts, and 8.7 (No. 10) Air Yards per Attempt.

In addition, Trubisky’s rushing game has returned slightly compare to his 2019 totals. He’s averaging 21.0 (No. 11) Rush Yards per Game and has recorded three (No. 7) Red Zone Carries. The Falcons allowed three rushing touchdowns to Prescott this past week. The beauty of this matchup, besides the Falcons defensive weakness, is that Atlanta has a high-octane passing game and plays at a fast pace. Even if they start hot, that will give Trubisky plenty of garbage time opportunities.

With both Raheem Mostert and Tevin Coleman set to miss this week’s matchup against the New York Giants, Jeff Wilson has gone under the radar as a spot start. The San Francisco 49ers still operate a run-heavy attack, and while Jerick McKinnon is set to be the feature back, this system does not revolve around one bellcow. The 49ers running backs have recorded 3.73 yards before contact per carry, No. 1 in the league. They provide their backs with chunk gains and opportunities to make plays at the second level of opposing defenses. At 6-0, 210-pounds, Wilson converted four of his five carries inside the five-yard line last season, making him a great bet to score a touchdown in Week 3.

The entire Detroit Lions offense is about to see a boost in production with Kenny Golladay‘s return looming. Their Week 3 tilt against the Arizona Cardinals is expected to be a shootout. Both teams rank in the top ten in Pace of Play, while the game has the highest over/under for the week according to Las Vegas book makers.

Danny Amendola will line up in the slot against Byron Murphy, who has allowed six receptions for 104 yards from the slot through two weeks. While Amendola is not a sexy play, he has seen 14 (No. 26) targets through two games and posted a 7-104-1 line against the Cardinals in Week 1 last season.

Through two games, the Philadelphia Eagles have allowed the sixth-most fantasy points to opposing tight ends. They allowed a touchdown to Logan Thomas in Week 1 and that was followed up by a three-touchdown game from Tyler Higbee. 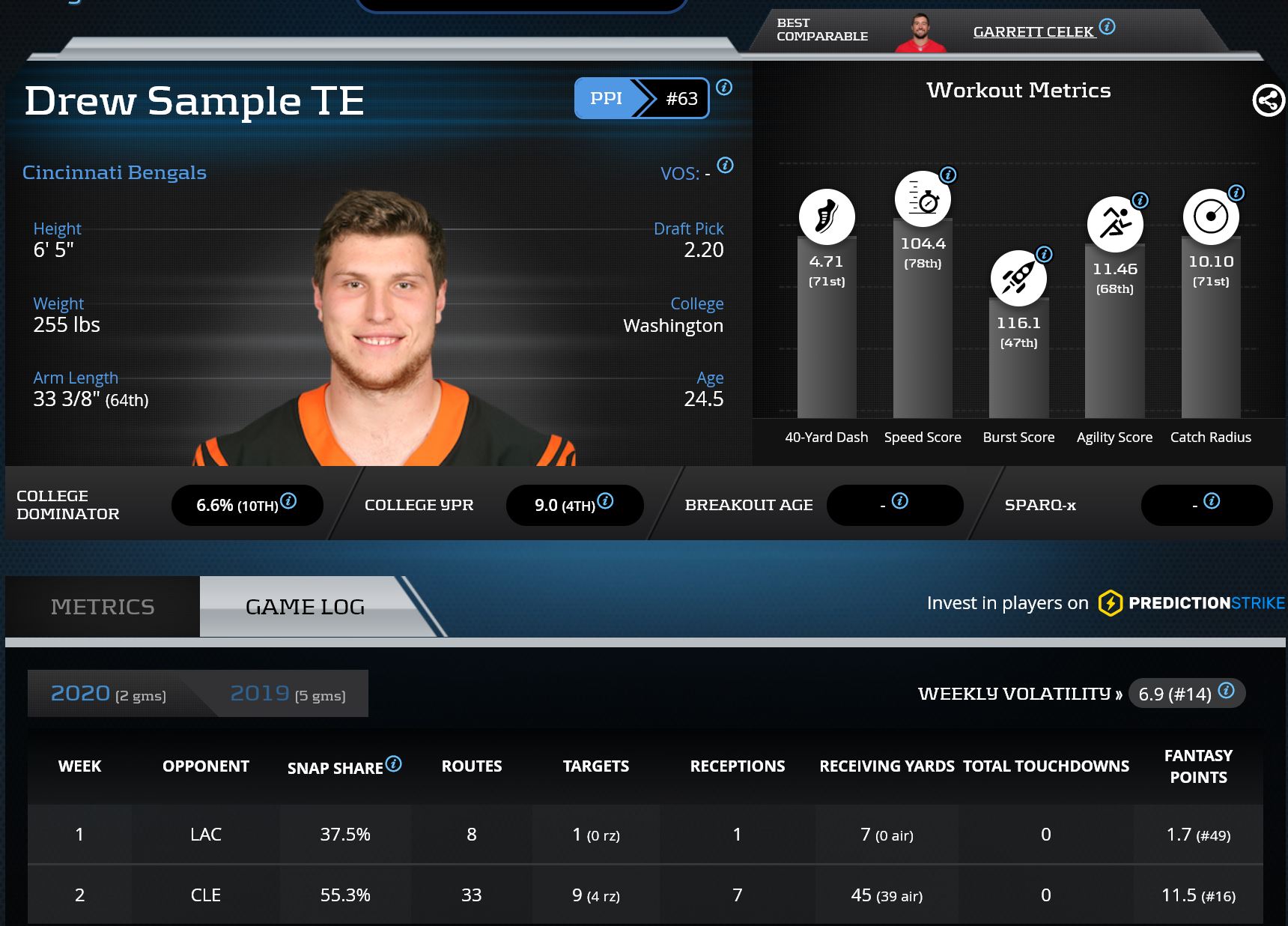 Joe Burrow leads the NFL with 97 passing attempts and Bengals tight ends have drawn a 21.6-percent Target Share. With C.J. Uzomah out for the rest of the regular season, Drew Sample walks into a prime opportunity to soak up most, if not all, of that target share. Remember, this Bengals regime spent a second round pick on Sample in last year’s draft.