You played fantasy football last season, drafted all your players, had a couple of solid wide receiver performances, always knew who your quarterback was going to be, and maybe even saw a few running backs in your Zero RB lineup pay off.

Then, like everybody else, you didn’t have the slightest clue with what to do at tight end. Most likely because nearly all of them were posting scores below their projections, and even your streaming options weren’t paying off.

Not to worry, you weren’t alone. The tight end play for fantasy owners in 2016 felt well-below standard compared to recent seasons, and now it’s time to dissect why, and figure out what we should expect in 2017.

PlayerProfiler.com offers what I consider to be one of the most valuable stats when evaluating players for your fantasy team. Granted, hind sight is always 20/20, but you could almost make the case that you could have gone Zero TE in last year’s drafts, and ended up seeing just as much production from your plug-and-play options, as the guy who started Jordan Reed every week did.

That valuable stat is value over stream, which calculates a player’s fantasy points per game over the average waiver wire replacements in standard fantasy league formats during either the current season (or previous year during the offseason) and adjusts for positional bust rates.

To completely understand how value over stream works for individual players, checkout the article that introduced it all back in 2015.

One of the most significant drops in value over stream (VOS) that took place league wide from 2015 to 2016 was that of the tight end position, which shouldn’t come as a surprise to fantasy owners. 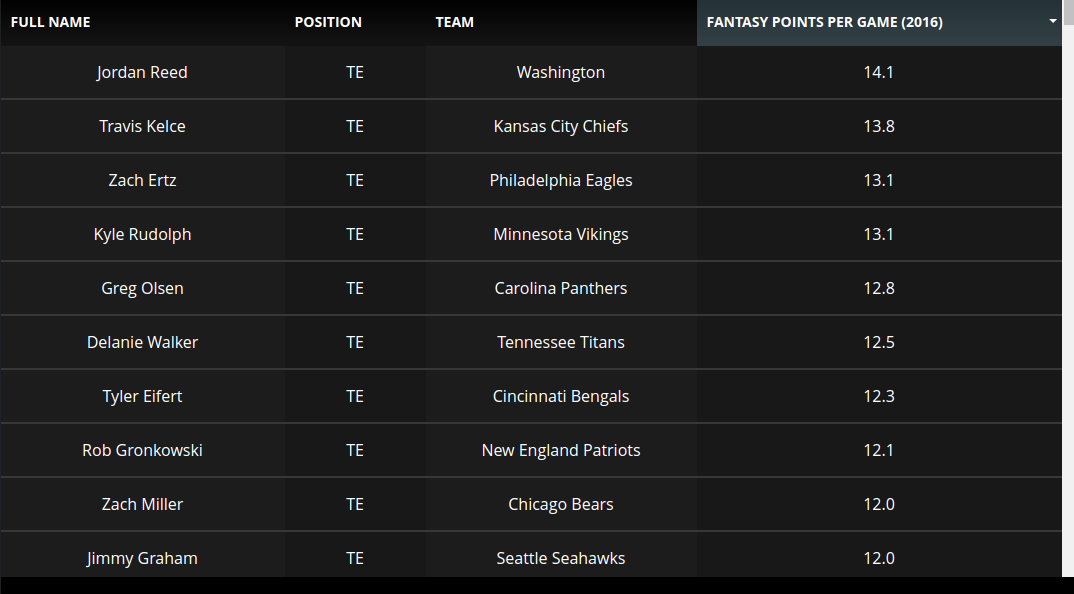 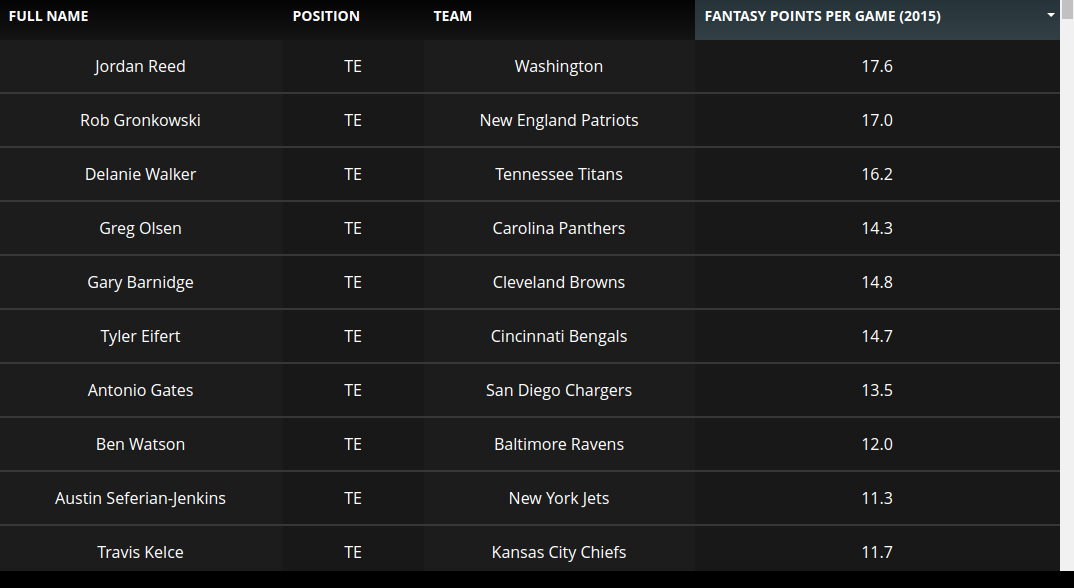 But is what appears to be a huge drop off as drastic as it initially appears? The fact that Jordan Reed was only better than a guy like Eric Ebron who posted a 0.0 VOS in 2016 by a few yards or receptions per game. It almost doesn’t seem possible, but that was the reality of last season.

The VOS of Yesteryear 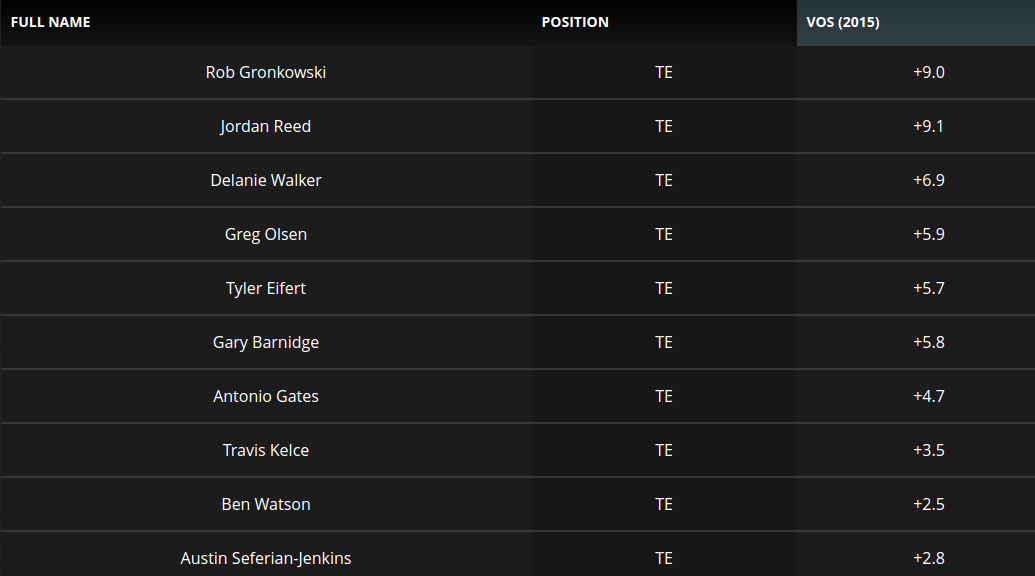 We saw a similar trend in 2014, where the average VOS for top 10 fantasy tight ends was only +4.6, with Rob Gronkowski leading the way with a +9.2 VOS. The second-highest VOS for tight ends that season was the +6.1 VOS posted by Jimmy Graham, who was worth only 1.5 more fantasy points per game than the stream tight end.

The average VOS of +1.7 in 2016 among tight ends was no doubt disastrous, but in all actuality, the apparent monumental drop equates to nothing more than a handful of receptions or yards per game compared to that 19th-best stream tight end you can essentially acquire any week of the season. 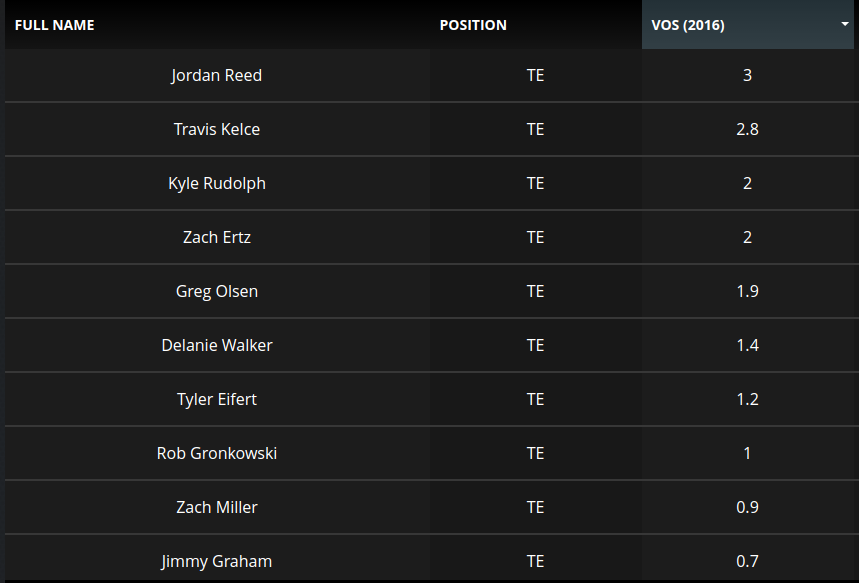 The Fantasy Points Per Game Problem

NOTE: Only four tight ends averaged 12.0 or more fantasy points per game in 2014.

The New Reality and 2017 Solution

The recent rise in fantasy points per game among tight ends shows the continuing evolution of the tight end position in the NFL.

To be clear, Jordan Reed hasn’t gotten worse, but guys like him and Rob Gronkowski are becoming more expendable in fantasy drafts as other teams begin to utilize the position in the passing game with greater frequency, as evidenced by the increase in fantasy points per game.

No fantasy owner (at least those who frequently visit PlayerProfiler.com) should ever feel a need to draft a tight end in the early rounds, but the recent change in VOS further solidifies why it’s acceptable to hold off on the position in your fantasy drafts.

For a position that often features far less explosive players, less targets and less yards on a yearly basis, it’s not surprising to see other tight ends gaining on once distinguished players of the same position. While there are still tight ends in the league who are undoubtedly viewed as more elite players than their counterparts, recent VOS suggests that your chances of landing a player of similar caliber late in a draft are increasing. Additionally, keep in mind that VOS is a stat that measures value over streaming compared to all offensive positions in fantasy football. It is not ranked solely on position in the grand scheme of things.

While Jordan Reed did rank first among tight ends in VOS in 2015 and 2016, when compared to all other position players, he topped out at 54th-overall in 2016 VOS. Save those valuable early picks for players with elite VOS in your 2017 drafts, and don’t be discouraged by the marginal difference among tight end VOS from 2016. The elite tight ends aren’t falling off a cliff, there are just more striving to reach the peak, resulting in a position that is very capable of streaming heading into next season.