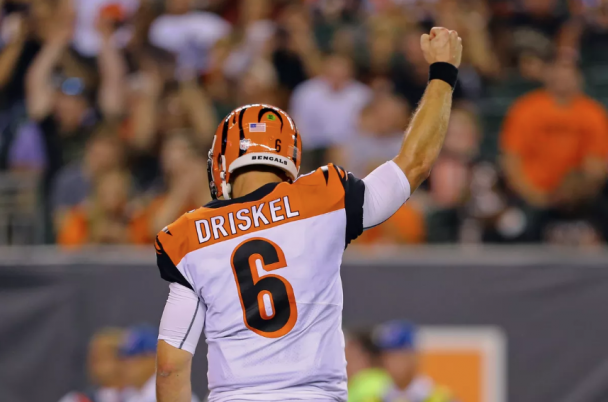 DFS on FanDuel doesn’t have to be hard.  If you used any of the active “lineup makers” from last weeks article, you were able to get up to Christian McCaffrey and Saquon Barkley and win your matchups.  That is the purpose of value plays.  We aren’t looking to break the slate with sub-$5000 players, we are looking to afford the guys who will break the slate.  Let’s see who will get us there this week.

Certain fantasy QBs have the “Konami Code”.  This rare trait is the ability to gain free fantasy points with their legs.  The Bengals new starting QB, Jeff Driskel, has the Konami Code.  He is an 89th-percentile SPARQ-x Score athlete who posted a 4.56 (96th-percentile) 40-yard dash. Driskel flashed his athleticism in his last two games, where he rushed for 44 yards and two touchdowns. Now we will see Driskel draw the start with a full complement of offensive weaponry at only $6400.

The Chiefs just released Kareem Hunt following the release of a video showing him brutalizing a young woman.  Spencer Ware will fill in at RB against a very bad Raiders team at home favored by over two touchdowns.

Ware finished as an RB1 in 5 of 14 weeks started in 2016 and is now on a far more efficient offense. This guy will literally be 100-percent owned on all DFS sites, so you should probably get in on the action in cash game and consider pivoting away from the screaming ownership in tournaments.

Leonard Fournette‘s one-game suspension sets up T.J. Yeldon as a key lineup maker for Week 13.  At 6-1, 226-pounds, Yeldon is a pass-catching specialist with bell-cow size.  He is already top-10 in targets, receptions, and receiving yards among running backs.  Now Yeldon faces the Colts defense, who have surrendered the second-most receptions to opposing running backs.  The Colts are favored in this contest, meaning Yeldon will see plenty of snaps as the Jaguars play from behind.

Demaryius Thomas posted his best game as a Texan in Week 12 with 38 yards and two touchdowns on four catches.  The touchdowns are an encouragement, but an increased target share at the expense of Keke Coutee would solidify Thomas as a good play against a middling Browns secondary.  Coutee has dealt with chronic hamstring issues since the preseason.  If he were to miss Week 13, a chunk of his 22 percent target share would find its way to Thomas.

Buccaneers WR DeSean Jackson hasn’t caught a pass all week as he’s been sporting a cast on his left thumb, according to Rotoworld.  Unless Jackson shows the ability to catch a pass in practice, it would be hard to imagine him having any role against the Panthers on Sunday.

Chris Godwin wouldn’t slide directly into Jackson’s deep role, but he would see increased targets in the slot.  Panthers CB Donte Jackson gave up seven receptions on nine targets for over 100 yards the last time these two teams played in Week 9.  Jackson should be covering Godwin for a majority of the game.

Lions WR Bruce Ellington has been the replacement for Golden Tate in the slot.  He has seen volume in this role over the last two weeks (9 & 7 targets), and will now be in a high-scoring game environment.  Ellington is nearly the “stone-min” and will be covered by PlayerProfiler’s #122-ranked CB, Troy Hill.

Matt LaCosse has quietly had a reception in each of his last eight games as the backup TE for the Broncos.  Jeff Heuerman is now out of the picture, thrusting the unknown Lacosse into a full-time role.  He was not productive in college, nor is he very athletic, but he did catch three of his four targets last week for 34 yards and a score.  The Bengals have ceded the most FanDuel fantasy points to opposing TEs by a wide margin.  LaCosse is a legitimate option at an incredibly cheap price tag.