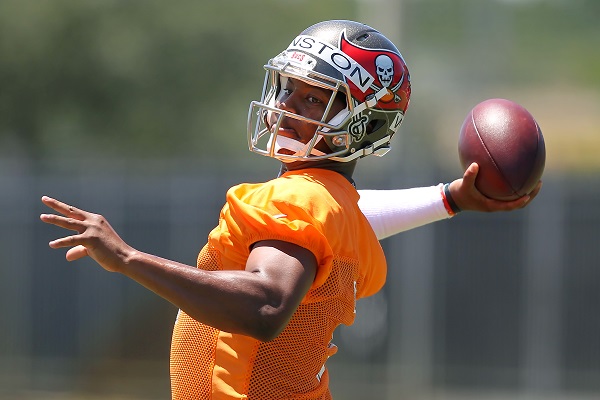 They don’t make NFL rookies the way they used to.  With incoming college players now groomed by personal strength and technique coaches, more rookie players are entering the league ready to contribute on an every-down basis.  The fantasy numbers back up this sentiment, as rookie players often outperform their average draft position, particularly last season, and can provide more value than their experienced counterparts.

If targeting a rookie who’s projected to play a significant role on offense, no reason to look farther than Jameis Winston.

Ranked at number 106 in the Player Profiler Top 200, 15th among QBs, it’s safe to say that the RotoUnderworld army likes Jameis Winston more than the general public.  In a year where fantasy owners are picking rookies earlier and more often than usual (understandable given the success of 2014’s group), touting the player who was the No. 1 overall selection in the 2015 NFL Draft seems too obvious.  Yet, Winston has consistently been available in the final round of draft — the ultimate late-late round QB value play.

Jameis Winston may not have Dan Marino’s arm or Peyton Manning’s brain, but he does have is an elite prospect profile.  One that includes a 4000 yards, 40 touchdowns, 10.6 yards per attempt, and a Total QBR of 89.4 (93rd-percentile) at age-19 as Winston led Florida State to a BCS National Championship and won a Heisman Trophy in the process.

What separates Jameis Winston from other first round quarterback prospects with 80th percentile college QBR seasons on their resumes such as Johnny Manziel (96th percentile), Marcus Mariota (97th percentile), and Robert Griffin III (81st percentile) is that Winston’s QBR was derived almost exclusively from the passing expected points added (Pass EPA) component of the QBR metric as opposed to rushing expected points added (Run EPA).  A pure pocket passer posting an 89.4 Total QBR is an extraordinary accomplishment.  A pure pocket passer posting an 89.4 Total QBR as a redshirt freshman in a major conference is stunning.  Winston’s prolific 2013 season offered a window into his stratospheric ceiling — an NFL passer capable of 4000-plus yards and 30-plus touchdowns annually.

What is not to like?  Jameis Winston’s TD:INT ratio of 40-10 in 2013 dropped to 25-18 in 2014.  Winston has a propensity to turn the ball over.  At Florida State, Winston has a well-documented blind spot for linebackers lurking in the flat, which showed itself again during 2015 NFL preseason.  While turnovers are crippling in a real football context, they are negligible in a fantasy footabal context.  The loss of two fantasy points is offset by friendlier game flow if the opposing team capitalizes on the turnover.

Jameis Winston’s top receiver during his breakout 2013 season at Florida State was the 6-5, 240 pound Kelvin Benjamin.  A player who was exposed as an inefficient, volume-based producer during his rookie year who accumulated his most meaningful stats during garbage time.  Now imagine Winston thowing the ball up to Mike Evans who made little Johnny Manziel look like a first round-caliber NFL QB at Texas A&M.  Evans’ closest comparable player is his fellow teammate Vincent Jackson.  Though Jackson’s efficiency has been down for two straight seasons, he’ll be playing with the one of the most accurate downfield throwers of a generation.

Mike Evans and Vincent Jackson are the NFL’s biggest WR tandem.  Standing at 6-5 and weigh 230-plus pounds, Evans and Jackson sport Height-adjusted Speed Scores (HaSS) and Catch Radii in the 90th percentile at their position.  Now add the presence and expected second year growth of 6-6, 262 pound TE Austin Seferian-Jenkins, an optimal target in the game of Late Round TE Roulette.  The Tampa Bay Buccaneers ooze size-adjusted athleticism.

Still not excited about Jameis Winston?  His Upcoming Schedule Strength in the easiest among NFL quarterbacks by a wide margin. PlayerProfiler‘s Schedule Strength calculates the fantasy points allowed above/below the mean to particular position (QB, RB, WR, or TE) by the opposing defense(s) on a player’s remaining schedule.  Schedules above +.25 are considered easy and schedules under -.25 are considered difficult.  Jameis Winston’s number is +1.55.

I suppose I should also mention that the Tennessee Titans, Tampa’s Week 1 opponent, are expected to be missing top CB Jason McCourty due to a groin injury.  If Jameis Winston is still on your league’s waiver wire, add him before he has a big game against the Titans.  Winston has a real opportunity to pull a 2011 Cam Newton and pass for 400-plus yards in each of his first two NFL starts.

Doug Martin is a one-year wonder that few fantasy gamers have not yet come to terms.   The fantasy community with its collective cognitive dissonance continues to exclusively focus on Martin’s stellar rookie season sending his MyFanasyLeague.com money league ADP skyrocketing from seventh round to the fifth round (and rising daily).  In a larger, more recent, and more meaningful sample, Doug Martin posted a -30.0 and -36.7 Production Premium (PlayerProfiler‘s situation-agnostic efficiency metric) from 2013-2014, last among NFL running backs over that period.  Some of Martin’s struggles over the past two seasons can be traced back to poor offensive line play.  Though Tampa made efforts to improve the line this offseason, it remains one of the team’s glaring weaknesses, and the loss of right tackle Demar Dotson only compounds the problem.  Despite Martin’s alleged resurgence, when the ground game inevitably sputters, the Buccaneers will be forced to throw and throw and throw and throw and throw some more.

When an unathletic rookie skill position player on bad offense such as fifth-rounder David Cobb is being drafted ahead of Jameis Winston at his 158.4 MFL money league ADP, a true value proposition has presented itself.  Winston was a precocious QB prospect who happened to be drafted into the ideal fantasy situation.  The league’s next truly prolific passer, Winston was blessed the NFL Draft gods.  Paired with a freakishly athletic receiver corps and the friendliest schedule in football, Jameis Winston is what dying and going to fantasy football value heaven looks like.