A popular theory, frequently mentioned by The Podfather himself when it comes to selecting a tight end in fantasy drafts, is to either be the first to take one or the last. Middle round tight ends have not exactly panned out of late, especially in fantasy terms, so if you find you’ve missed out on Travis Kelce, George Kittle, or Mark Andrews, I would not advise you to settle for the likes of Darren Waller or Tyler Higbee. At least at their present price.

Instead, keep your powder dry for just a few rounds longer. There are a host of tight ends available after pick No. 100 that boast impressive athletic profiles and have significant opportunities to make some noise on their teams this season. Aaron Stewart has recently written about one such player in Jonnu Smith, but there are two more whose advanced stats and metrics make them just as likely to break out as Smith in 2020. These two players also currently boast ADPs after the pick No. 100 over at the FFPC, which is is a TE premium format. Imagine how late you’ll be able to get them in redraft this summer.

Blake Jarwin is not as impressive an athletic specimen as Jonnu Smith, we should be clear straight away, but his workout metrics are not those of a player who should in any way be thought of as a slouch. Efficiency has been the order of the day for Jarwin through the first three seasons of his NFL career. He has only seen 77 targets in his 33 career games, with 41 (No. 34 among qualified tight ends) coming last season, but he has caught 58, giving him a career catch rate of 75.3-percent. He was No. 10 in that metric last season after reeling in 75.6-percent of his looks.

Jarwin only recorded a 9.5-percent (No. 48) Dominator Rating, but his efficiency metrics hint at a player that deserves far more opportunities. He was inside the top ten at the position with 8.9 (No. 6) Yards per Target, 2.37 (No. 8) Yards per Pass Route, and a 10.7-percent (No. 8) Target Premium. He has a clearly demonstrated chemistry with his quarterback Dak Prescott, enjoying a 6.7 (No. 4) Target Quality Rating and giving Prescott a 126.6 (No. 5) QB Rating whenever he looked his way.

Jarwin’s path to targets has become a little less rocky this offseason, with Randall Cobb and Jason Witten taking 166 of the team’s 190 vacated targets with them as they set off for the Houston Texans and Las Vegas Raiders respectively. The Cowboys did draft CeeDee Lamb, but his arrival should not stifle Jarwin’s production too much. Finally, a Cowboys tight end to get excited about.

Another year, another chance to write about Ian Thomas. I told you last year to get him in your dynasty league while he was cheap. Well, guess what? That buy-low window is well and truly shut. Those who want a piece of him in 2020 will have to get it in redraft.

Coming into the NFL, you wouldn’t have called Thomas a burner with his 4.74 (62nd-percentile) 40-yard dash time, but his other workout metrics are all 71st-percentile or better.

Thomas has seen his path to superstardom blocked in Carolina by the not insignificant presence of Greg Olsen. This is not his fault, Hall of Fame-caliber players are allowed to keep playing, despite the wishes of enthusiastic supporters of younger players. In the last two seasons, in games where Thomas and Olsen both played, Thomas was restricted to an average of 2.5 targets per game. Hard to make too much noise in real or fantasy football on less than three looks, but Thomas has produced whenever Olsen has been absent. 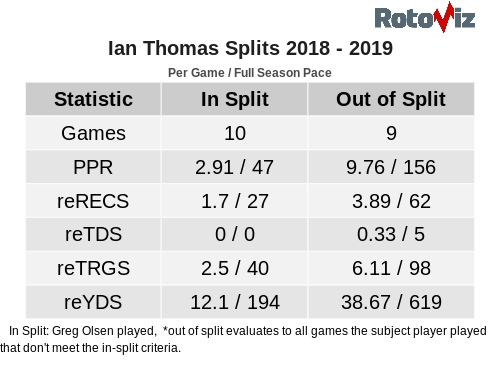 Ian Thomas Career Splits With and Without Greg Olsen – RotoViz

In 2018, Thomas averaged 12.3 PPR points per game between Weeks 13-17, posting four TE1 game weeks out of five. In two games without Olsen last season, Thomas averaged seven targets per game and 10.5 PPR points per outing. He would have done even better if he had benefited from any degree of chemistry with his quarterbacks. He and Kyle Allen averaged a woeful 3.65 Adjusted Yards per Attempt as a partnership, with Thomas seeing a measly 71.0-percent Catchable Target Rate. There were 40 tight ends that saw balls they could catch at a higher rate (minimum 30 targets).

Thomas and the Panthers have an upgrade at quarterback in Teddy Bridgewater. Say what you like about Teddy, and many do, but a scattershot quarterback he is not. Bridgewater was No. 2 in the NFL in 2019 with a 7.8 Accuracy Rating. Thomas, like D.J. Moore, Robby Anderson and Christian McCaffrey (not forgetting Curtis Samuel) should all benefit from Bridgewater’s presence. Ah yes, Thomas will have some competition for targets.

While he offers some yard after the catch ability, as with the other players, Thomas has an advantage over the others that fantasy owners will enjoy. He’s bigger than them. Thomas stands 6-4 and has a 10.21 (85th-percentile) Catch Radius. When the Panthers reach the red zone, he’ll be the player Bridgewater will be looking for. You may have missed the bus in dynasty leagues, but don’t miss out on him in seasonal leagues too. There is no doubting Thomas in 2020.