Volume is the reigning king of Fantasy Football. Which running backs are putting up big games week in and week out? It’s the ones that get touches. Which wide receivers are consistently producing in lineups? It is the receivers that get targeted the most. Quarterback volume breathes life into all positions based on the advanced stats, metrics, and analytics.

In 2017 the teams with the most passing attempts were the Giants, Dolphins, Buccaneers, and the 49ers, each team throwing the ball more than 600 times. It’s easy to find common threads here. None of those teams were contenders. The best of them had six wins. And, their poor defenses probably had a lot to do with those win totals. But it is important to be careful connecting these dots. If defense, good or bad, is driving pass volume we should see a trend that continues across the NFL, not only in this handful of teams. Teams with poor defenses should be making more attempts, teams with good defenses should be making fewer attempts, and it should translate to yardage.

More important still is the fact that the teams with the most attempts do not have the most yards, which is what we’re after. The Giants, for example, were a bottom half team in terms of passing yards while leading in pass attempts. Teams in the “blue,” those with the most passing yards, were in balanced offenses not taking an extreme amount of pass attempts. They were also often playing with a small lead. 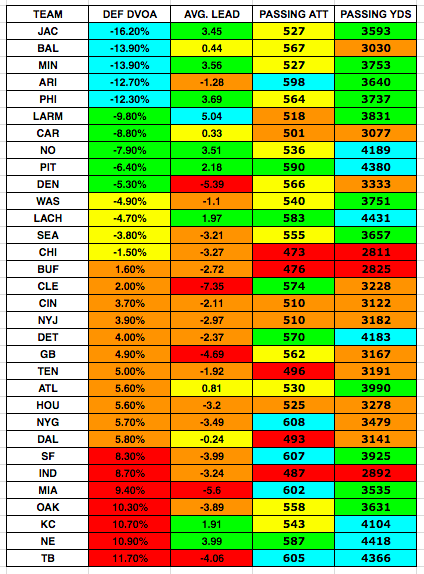 The “bad defense” narrative tells us that playing from behind is a source of passing volume. Bad defenses allow points, that puts the team behind, and the team switches to a pass-heavy approach. But, the narrative overlooks efficiency. Take for example the Rams, who played last year with, on average, a five point lead. Despite a lack of passing attempts, they were one of the more efficient passing offenses in the league, gathering upwards of 3800 yds (7.39 yards per attempt). The counter-example is the Cleveland Browns who, despite throwing the ball nearly 600 times were unable to top 4,000 yards (5.6 yards per attempt). The two most efficient passing teams were the Saints and the Chiefs. Both were in the bottom half of the league in pass attempts yet top seven in passing yards. On average, both teams were playing with a lead. In the passing game, efficiency outweighs volume.

Teams that pass efficiently, who move the ball a healthy number of yards per attempt, end up with more yards. In the game of fantasy football, it is yards we care about, not attempts. It is a stretch to say that we want Russell Wilson to be playing with a degraded defense so that he will be behind,  have to pass more, and therefore end up with more passing yards. Game ending TD’s are a vivid event that we won’t soon forget, especially if it alters the outcome of the game. But these play-from-behind scenarios are not efficient. They are not fruitful fantasy point situations. 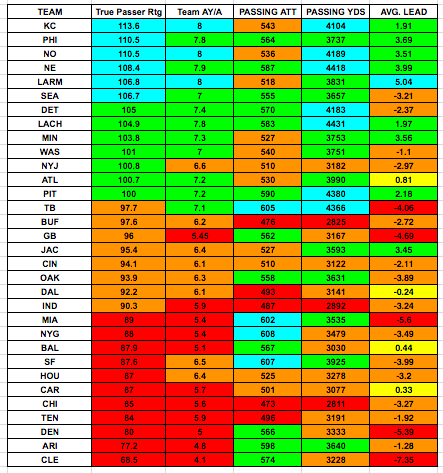 At the top of the chart are the teams whose QBs held the highest True Passer Ratings with Adjusted Yards Per Attempt (AY/A) closely aligned. Total Attempts, however, do not follow. A number of low-attempt teams moved the ball efficiently and compiled more yards. Other high attempt teams had poor efficiency. Despite the volume of pass attempts, no team with a True Passer Rating below Jameis Winston’s 97.7 topped the 4,000 yard mark.

The most interesting connection may be to the team’s average lead. Of teams with an AY/A over seven, all except one played with an average lead of greater than one point. Efficient passing has a clear connection to passing yards. Both efficiency and yards have a clear connection to a positive game script. Based on this analysis, the following players should either be targeted or avoided in fantasy football drafts.

While the Saints did lean more run-heavy than they have in the past, Brees will continue to enjoy the benefits of having Alvin Kamara as a receiving option. The team has also added Cameron Meredith and Tre’Quan Smith, both exciting young talents, but Brees doesn’t need to be better in 2018 to exceed expectations. All he needs is for the team’s touchdowns to fall more in line with historical production. In 2017, the Saints scored exactly as many rushing touchdowns as passing touchdowns (23).

In the previous two years, the team had scored 38 and 32 passing TDs compared to 16 and 17 on the ground. The days of the Saints scoring twice as many passing touchdowns as rushing touchdowns may be over, but 27 passing to 18 rushing TD’s seems entirely possible and would put Brees back in QB1 (top 12) territory.

Philip River’s efficiency is also underpriced. His Adjusted Yards Per Attempt of 7.6 was sixth last year, yet his price tag is QB14 in redraft and QB21 in dynasty. He also carries a positive production premium making him an even safer bet. As if this wasn’t enough, the team around him is improving and it is likely that Rivers enjoys more positive game script than a year ago, which spells cheap and efficient production. Rivers was a QB1 in over half of his games in 2017 and was one of the steadiest QBs per his 5.9 Weekly Volatility score. Drew Brees is another great target for drafters looking for a proven talent. No one was more efficient than Brees on a per attempt basis as he led the league with an Adjusted Yards Per Attempt of eight yards.

A player costing fantasy gamers more than he should is Deshaun Watson. It’s difficult to take what Deshaun did last season in six starts and put any negative spin on it, but, at a minimum, it is fair to question the ADP. Watson is currently going in the 3rd round of dynasty startups and 4th in redrafts. He is often the first quarterback drafted in dynasty leagues and a consensus top-5 quarterback in seasonal/redraft leagues. The opportunity cost of Watson is someone like Rashaad Penny or Stefon Diggs. Beyond the opportunity cost, drafting a quarterback at such an ADP is a statement of confidence that he will finish as a top quarterback

In the last five years, only six of the 15 quarterbacks drafted top-3 at the position actually finished top-3. The average finish was instead QB8. During Watson’s 6-game streak, he threw 18touchdowns on just over 200 attempts, a touchdown for every 11 throws. Russell Wilson, in last year’s QB1 season, threw one touchdown every 16 attempts. Aaron Rodgers’ 40 touchdown season last year put him around one per 15 attempts. And that has proven to be a difficult pace for even Aaron Rodgers to maintain. By taking Deshaun as a top-3 quarterback, these phenomenal performances become not a great bonus but a necessity to justify the cost.

Despite the drastic turn in his team’s win-loss record when he became the starter, Jimmy Garoppolo earned a -12.6 (No. 32) Production Premium, a metric which compares his performance to that of other QB’s in league-standard situations. Fans love what he did for his team, but only one of those performances topped 20 fantasy points. From week 13-16, Jimmy was outscored in fantasy points by the heralded Joe Flacco. In 2018, Garoppolo will be playing for a team that Vegas expects to be middling with a win total of 8.5 wins, suggesting skepticism about his ability to maintain the efficiency he showed during that season-ending 5-0 run. At a price tag of QB9 in redraft and QB5 in dynasty, his production and efficiency may be found more cheaply in others.

Passing yardage comes from good (efficient) QBs. And, QBs are better in a positive game script. The idea that we should expect a QB playing with a bad defense in a negative game script to put up better numbers is completely false. If volume, in the form of attempts, does come out of those types of situations, it is inefficient. In these cases, the yards needed for fantasy production often does not materialize. What a player does in the last 2 minutes of a game represents a small amount of what that player does in a year. We remember when these hurry-up scenarios pan out because they are vivid events, but they should not figure into our decision making. They are the QB equivalent of the prime time drop for a WR or a fumble for an RB. Instead, we should look for QBs who have a history of efficiency with their attempts. Even better would be an efficient QB who figures to be on a winning team and play in positive scripts. If an efficient QB is not available the next best option is a QB that is in a good situation, and a good situation is winning.