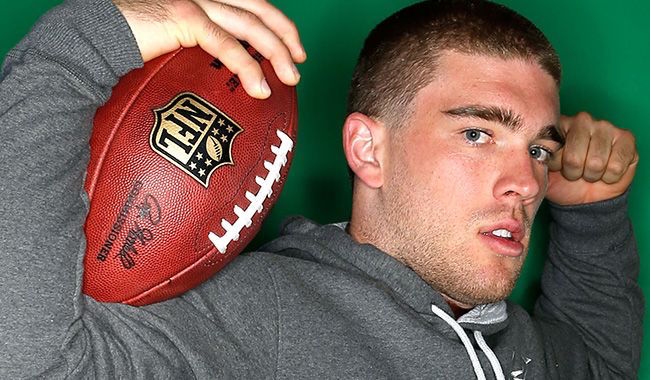 Week 17 represents a giant weekend for daily fantasy sports. 90-percent of redraft leagues have already crowned their champions as of week 16, yet magically, there is one more full slate of games left on the NFL calendar.  DFS fills this action void nicely.  For newbies, week 17 is the perfect week to dip a toe in the daily fantasy pool and make this Sunday’s action more interesting.

PlayerProfiler and XN Sports have outlined noteworthy value plays who could either serve as the cornerstones of an optimal cash lineup and/or add upside variance to GPP/tournament rosters in the season’s final week.

Ryan Fitzpatrick posted the best bad quarterback season in league history with the Texans last season.  In 2014, Fitzpatrick was sneaky efficient evidenced by an +18.8 (No. 3) Production Premium and 95.3 (No. 9) Passer Rating.  This season, Ryan Fitzpatrick’s statistics have been further propelled by Brandon Marshall and Eric Decker, the best WR tandem in the league.  Aaron Rodgers’ struggles this season serve as a reminder that weapons matter more to quarterbacks than most sports analysts expect.  This season, Fitzpatrick has consistently posted low-end fantasy QB1 numbers enabled by his efficiency (top-10 Total QBR) and sneaky rushing skills (258-yards, two TDs).  Recently, Fitzpatrick has been a cash game stalwart posting 25 fantasy points in four of the his last five games.

Week 17 DFS is more nuanced than the other weeks on the NFL schedule.  Players on teams contending for a playoff spots are the only options assured to play with high morale for all four quarters.  Fortunately for Ryan Fitzpatrick enthusiasts, the New York Jets must defeat the Buffalo Bills in week 17 to ensure a playoff birth.  A demoralized Bills defense seemed to have rebounded holding Kellen Moore and the Cowboys to six points last week, but just a week earlier, Kirk Cousins annihilated the Buffalo secondary for 319-yards and four touchdowns in week 15.  Coming off a three-touchdown performance against the New England secondary in week 16.

Ozzie Newsome drafted Javorius “Buck” Allen over more highly graded prospects such as David Cobb and Jay Ajayi in the 2015 draft.  Allen’s ideal size (221-pounds), impressive size-adjusted speed (105.0-Speed Score) and exceptional receiving skills may be the attributes that tipped the scales in his favor on draft day.

Fast-forward six months.  Justin Forsett broke his arm in week 10, and Javorius Allen stepped in and reeled off four straight weeks with a 60-percent-plus opportunity share and 10-plus PPR fantasy points per game, including a 35-point reception-fueled explosion in week 13.  Then, John Harbaugh inexplicably benched the rookie after a single week-15 fumble nullifying his fantasy output and costing numerous fantasy teams a championship round birth.  Fortunately, Allen reclaimed his starting job in week 16 and posted 22-fantasy points against a quality Pittsburgh run defense.  It seems the Ravens have found their workhorse back of the future in Buck Allen.

After running a gauntlet of staunch run defenses for three straight weeks (SEA, KC, PIT), Javorius Allen receives a relative respite this week in Cincinnati’s rush defense that allows the 16th most fantasy points to opposing running backs.  At $4,400 on DraftKings, Allen is an affordable bell cow.  As one of the most heavily-targeted backs in the league, Allen’s 10-point floor offers cash game value and his 30-point ceiling makes him an attractive tournament play.

Widely considered the rare 6-3 slot receiver, Jordan Matthews has succeeded running inside and outside routes throughout the season and is on pace for 80-receptions and 1000-yards in his second season.  Indeed, the notion that a wide receiver with a 48.3-percent (92-percentile) College Dominator Rating and a 110.1 (88th-percentile) Height-adjusted Speed Score (HaSS) would be unable to win outside is comical.  However, any receiver would struggle to maintain consistency catching passes from Sam Bradford and Mark Sanchez.  After a overcoming a drop-prone four-game stretch early in the season, Matthews regained his footing with a 133-yard and 159-yard performance mixed in with some dud games.

The Eagles face the Giants in week 17 in the immediate wake of Chip Kelly’s firing.  Though Philadelphia has been eliminated from the playoff picture, Matthews’ Vanderbilt resume demonstrated his willingness to give maximum effort even in futile contests.  The Giants pass defense ranks in the bottom-5 in both fantasy points allowed to wide receivers and overall pass defense efficiency. Matthews’ $4,700 salary on DraftKings makes him the ideal GPP lineup maker.

Zach Ertz was one of the most well-decorated tight end prospects coming out of Stanford in 2013.  Ertz’s 31.8-percent (90th-percentile) College Dominator Rating illustrates one of the most dominant college football resumes in the NFL today.

The tight end position is arguable the most difficult position in the sport to learn evidenced by the relatively late breakouts of former elite prospects such as Tyler Eifert, Greg Olsen, and Martellus Bennett.  A young tight end ascending at the end of year 3 is not an exception, it is the norm.  Zach Ertz is absolutely ascending evidenced by three straight weeks with 15-plus fantasy points in additional to leading the NFL in target share (over 30-percent) over the past two weeks as Ertz has emerged as Sam Bradford’s go-to receiver in most situations.

Like Matthews, Zach Ertz faces the Giants this week and should have no problem reaching maximum motivation during the game.  The Giants are the second-friendliest pass defense for fantasy tight ends — a dream match-up for Ertz.  With a salary inexplicably still stuck at $3,600 on DraftKings, Ertz will likely have the highest ownership percentage on the site.  He will be a lock in cash games but tournament players thirsting for variance may look elsewhere.