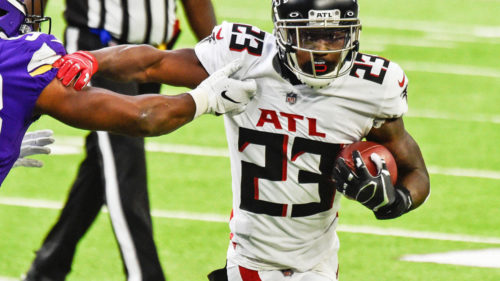 Maximizing your fantasy points per salary dollar is the key to cashing in DFS. If you want to afford the best cash plays on the slate, dumpster diving for underpriced value plays is the way to go. Just like every week, COVID and injuries have opened up value at most positions. Here are the best DFS Flex values for Week 12 based on PlayerProfiler’s advanced stats, metrics, and analytics.

With Todd Gurley officially ruled out with a knee injury, we get a cash game lock in the form of Falcons RB Brian Hill. Gurley headlined our weekly free square RB piece, and he isn’t much better than Hill at this point in their respective careers, giving us a $1500 discount for the same production. With a 103.1 (72nd-percentile among qualified running backs) Speed Score, he flashed plenty of juice in 2019 with a 6.4-percent (No. 7) Breakaway Run Rate. Hill should slide directly into Gurley’s role, which is massive given his matchup this week.

Gurley has dominated touches in scoring position with 43 (No. 2) Red Zone Touches and seven (No. 11) Goal Line Carries. The Falcons clearly wanted to feature their biggest back and give him all the work. At 6-1, 219-pounds, Hill profiles quite similar to Gurley and is a much better option than the 5-9, 200-pound Ito Smith. Las Vegas has allowed the second-most rushing TDs to RBs this season, including three last week to Kansas City’s RB duo. They also rank No. 32 in Defensive Rushing DVOA, meaning Hill should have an efficient day to pair with his monster touchdown equity. This matchup also has a solid 53-point total, meaning finding exposure to it will be crucial this week.

Hill’s stone-minimum price tag on DK is massive to save salary on an otherwise tight week. Even at $5100 on FD, he is in a solid spot thanks to the site’s TD-favoring scoring system.

In the three games that John Brown has either left early or not played, Cole Beasley has 25 targets, 23 receptions, 265 yards, and an 18.5 DK point average. He also saw 188 combined Air Yards in those three games, meaning the Bills morphed his role into more than just a short-area slot receiver. 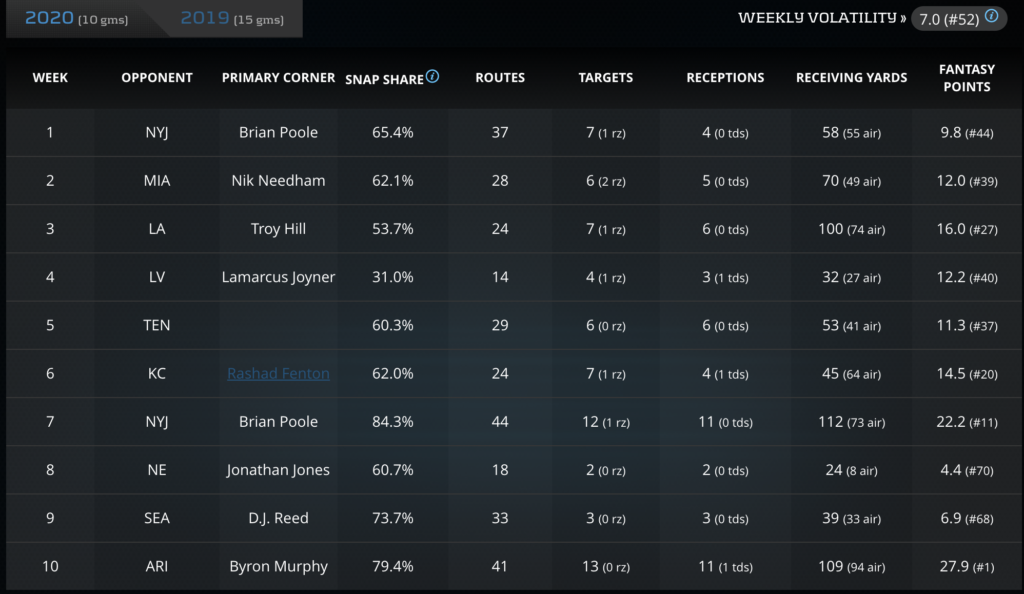 Brown has already been ruled out for Sunday’s matchup with the Chargers, meaning Beasley is set up for another smash spot. His price on DK has jumped up to $5500 thanks to a 27.9-point outing in Week 10, but his price on FD has lagged behind at $5400 relative to the $60,000 salary cap on that site. Thanks to DK’s full-PPR and bonus scoring system, he’s a great play on both sites.

The Chargers present a middling challenge, ranking No. 16 in Defensive Passing DVOA. They have given up solid games to slot receivers this season, such as Jakeem Grant, DaeSean Hamilton, Emmanuel Sanders, and Scott Miller. Plus, Josh Allen has been on fire, so Beasley has a chance for another massive game. He’s flashed enough upside this season that he is tournament-viable and a solid cash play.

After recording only 72 Air Yards in his first two career games, Denzel Mims has seen a ridiculous 319 over his last two. He’s only connected for 133 over those games, giving him 265 (No. 49) Unrealized Air Yards on the season. But the Jets are clearly trying to utilize his 115.6 (96th-percentile) Speed Score and are phasing out the low-upside Jamison Crowder. Mims also out-targeted Breshad Perriman for the second time this season, seeing eight looks to Perriman’s four. He has clearly commanded alpha usage for New York and is the main focus of their passing attack.

Mims doesn’t have the best matchup this week, drawing Byron Jones and the rest of Miami’s secondary. They have ranked No. 11 in Defensive Passing DVOA and their perimeter duo of Jones and Xavien Howard rank No. 21 and No. 4 respectively in PlayerProfiler’s cornerback rankings. Despite that, they have allowed the eighth-most receiving yards to WRs on the season. The Jets will be passing plenty as 6.5-point underdogs. Mims’ alpha role and expected pass volume point to a monster week soon. He’s a much better punt play on DK compared to his stiff price on FD.

With Larry Fitzgerald on the COVID list, Andy Isabella is finally getting his shot at an every-down role in the explosive Arizona offense. Isabella has played out of the slot at a 77.9-percent rate (No. 9) this season, making him the ideal replacement for Fitzgerald, whose 76.9-percent Slot Rate ranks only one slot lower. He should also absorb most of the 5.7 targets that Fitz has averaged this year on top of his usual deep shots.

Despite the limited volume, the Cardinals know how to use Isabella. They have taken advantage of his face-melting 4.31 (100th-percentile) 40-yard Dash speed, giving him a 15.4 (No. 11) Average Target Distance this season. Isabella has done nothing but produce in his two-year career, posting 24 receptions for 373 yards and three scores on his 36 targets.

it is one million percent andy isabella szn

The Patriots as a unit also rank No. 31 in Defensive Passing DVOA this season. With DeAndre Hopkins absorbing Stephon Gilmore and additional safety help, Isabella will be facing Jonathan Jones one-on-one for the majority of his snaps. The undrafted 27-year-old slot CB has been the main liability in coverage, allowing five touchdowns and 398 yards on his 49.8-percent Snap Share this year. This might be the last time we get Isabella at these prices in his career.

If you’re playing cash on DK, punting TE is usually the way to go. Given the massive price spikes of studs at RB and WR, it’s too difficult to afford Travis Kelce and Darren Waller, meaning paying as far down as possible without the risk of taking a zero is best.

Kyle Rudolph is the ideal punt play this week for cash lineups. With Irv Smith listed as doubtful, Rudolph should play every snap and will run more routes than his usual 17.6 per game. Adam Thielen is also out with COVID this week, so Rudolph should see a few extra shots without Thielen’s 7.6 looks per game. The Panthers have also allowed the second-most receptions and the fourth-most yards to TEs on the season, so his matchup sets him up for a season-best outing. He’s just barely above the min-price on both sites, so he’s in play on both DK and FD.