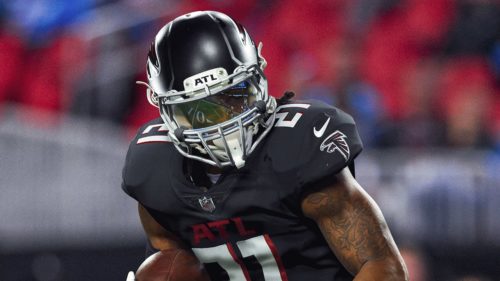 Free square running backs refer to RBs that come in severely underpriced relative to their projected roles. These players are often priced at the stone-minimum, opening up the DFS slate to jam in the premium plays. DraftKings has raised the salary floor for running backs this season from $3000 to $4000, so spotting these freebies is paramount if we want to afford the high-floor, high-upside smash plays. Using PlayerProfiler’s advanced stats, metrics, and analytics, we can identify RBs that fit the criteria. Here are the free square RBs for the NFL Week 12 DFS main slate.

Now down at $5500, Todd Gurley is officially priced at his lowest point of the season. It isn’t without a good reason, though. Gurley is coming off of his worst game of the year, handling just eight carries and one reception for 29 scoreless yards. His nine touches and 3.9 fantasy points were his lowest of the season by a wide margin, but he was playing the Saints. Through 11 weeks, they rank No. 2 in Defensive Rushing DVOA and have allowed the fewest fantasy points to RBs. The Falcons also fell behind and Gurley only logged two touches in the second half.

To be fair, Gurley isn’t the three-down workhorse that we saw in his days as a Ram. In the two games where he’s played fewer than half the snaps this season, he’s averaged 11 carries, 1.5 receptions and 43 total yards. He is entirely Game Script-dependent and needs a solid matchup or a touchdown to smash fantasy value. Luckily, the stars are aligning for him this week.

This matchup with the Raiders is tied for the highest total on the slate at 55.5 points. The Falcons are also only 3-point underdogs and are at home, meaning Atlanta should experience neutral Game Script throughout the contest. Lastly, Las Vegas ranks dead-last in Defensive Rushing DVOA and have allowed the second-most rushing TDs to RBs this season. That last part is particularly notable when you factor in Gurley’s 43 (No. 2 among qualified RBs) red zone touches and nine (No. 3) total touchdowns.

The only downside to Gurley is his lack of receiving usage and game flow-dependence. That is certainly a concern in a full-PPR format like DraftKings, but his matchup and touchdown equity makes up for it. His $5500 price doesn’t factor in his multi-touchdown upside.

Kenyan Drake has been another shockingly game flow-dependent RB this season. After averaging 4.9 targets per game last season, he’s only seen 1.8 per game in 2020. He did jump to five targets in Week 11, but he failed to see more than two in any other game this season, indicating a fluke week. Drake’s explosiveness has also been underwhelming, averaging a Breakaway Run on just 3.4-percent (No. 36) of his rush attempts. His preseason lower leg injury has clearly hampered him more than he let on, but there is reason for optimism.

Drake has absolutely smashed his last two soft rushing matchups. The Bills and the Cowboys rank No. 26 and No. 25, respectively, in Defensive Rushing DVOA this season. Drake racked up 264 rushing yards, four Breakaway Runs, and two scores combined against them. He showcased that he’s healthy enough to reach his 4.45 (91st-percentile) 40-yard Dash time, putting those concerns to rest.

There’s another soft matchup on deck this week in the form of a Patriots front that ranks No. 28 in Defensive Rushing DVOA. According to Football Outsiders, they rank No. 25 in second-level yards, meaning they struggle to take down explosive RBs once they get past the line of scrimmage. Drake fits that mold and benefits from a 92.9 (No. 5) Run Blocking Efficiency rating, so he’ll reach the second level often in this contest.

The Cardinals are 2.5-point favorites and Drake averages 16.2 carries per game this season. He has a reasonable shot at 20 rush attempts in this premium matchup. Given the explosiveness he’s showcased in his good matchups this season, Drake is an excellent play to leverage Arizona pass game stacks.

Since Devonta Freeman exited Week 7 early with an ankle injury, Wayne Gallman has averaged 15.5 touches, 63.3 total yards and has five total touchdowns. The Giants officially placed Freeman on IR in Week 10, meaning we get another game of Gallman as a workhorse. While he isn’t an every-down RB for the Giants, he has out-touched Alfred Morris 47 to 26 and has out-snapped him in each of the three games they’ve played together.

The Giants are 5.5-point favorites over the Brandon Allen-led Bengals this week. In three games with the Broncos last season, Allen took nine sacks and had two picks. This Giants defense hasn’t scared many offenses, but they have shown the ability to get to QBs with 25 (No. 11) sacks this season. We should see plenty of short fields and red zone opportunities for New York. Given Gallman’s five scores in his four games as a featured player, he has a good chance at finding the end zone.

With only a slight edge in touches and a 96.0 (47th-percentile) Speed Score, Gallman lacks the significant upside to be in a tournament-winning lineup. This also isn’t the best game environment with the lowest total (43.0) on the slate, meaning he should be reserved for cash lineups that are looking for a salary saver.