Brandon Aiyuk started his college career at the JUCO level, playing two seasons at Sierra College in California before transferring to Arizona State. He totaled 2,499 all-purpose yards with 21 touchdowns, which caught the attention of a number of Division I schools. Most of his offers were dependent on a switch to defensive back but Aiyuk wanted to remain a wideout, which is why he chose Arizona State.

In his first year with the Sun Devils, Aiyuk caught 33 passes for 474 yards and three touchdowns. He started three of the 13 games he played, behind future first-round NFL Draft pick N’Keal Harry. With Harry departing for the NFL in 2019, Aiyuk became the top dog in the ASU passing game. He produced a 40.6-percent (82nd-percentile among qualified wide receivers) College Dominator Rating, being targeted 99 times for a 26.9-percent Target Share. He turned those into a team-high 65 receptions for 1,192 yards and eight touchdowns. Aiyuk averaged 18.3 (87th-percentile) yards per reception, 3.04 yards per route and 3.1 yards per team pass attempt. He was named third-team Associated Press All-American and first-team All-Pac-12. 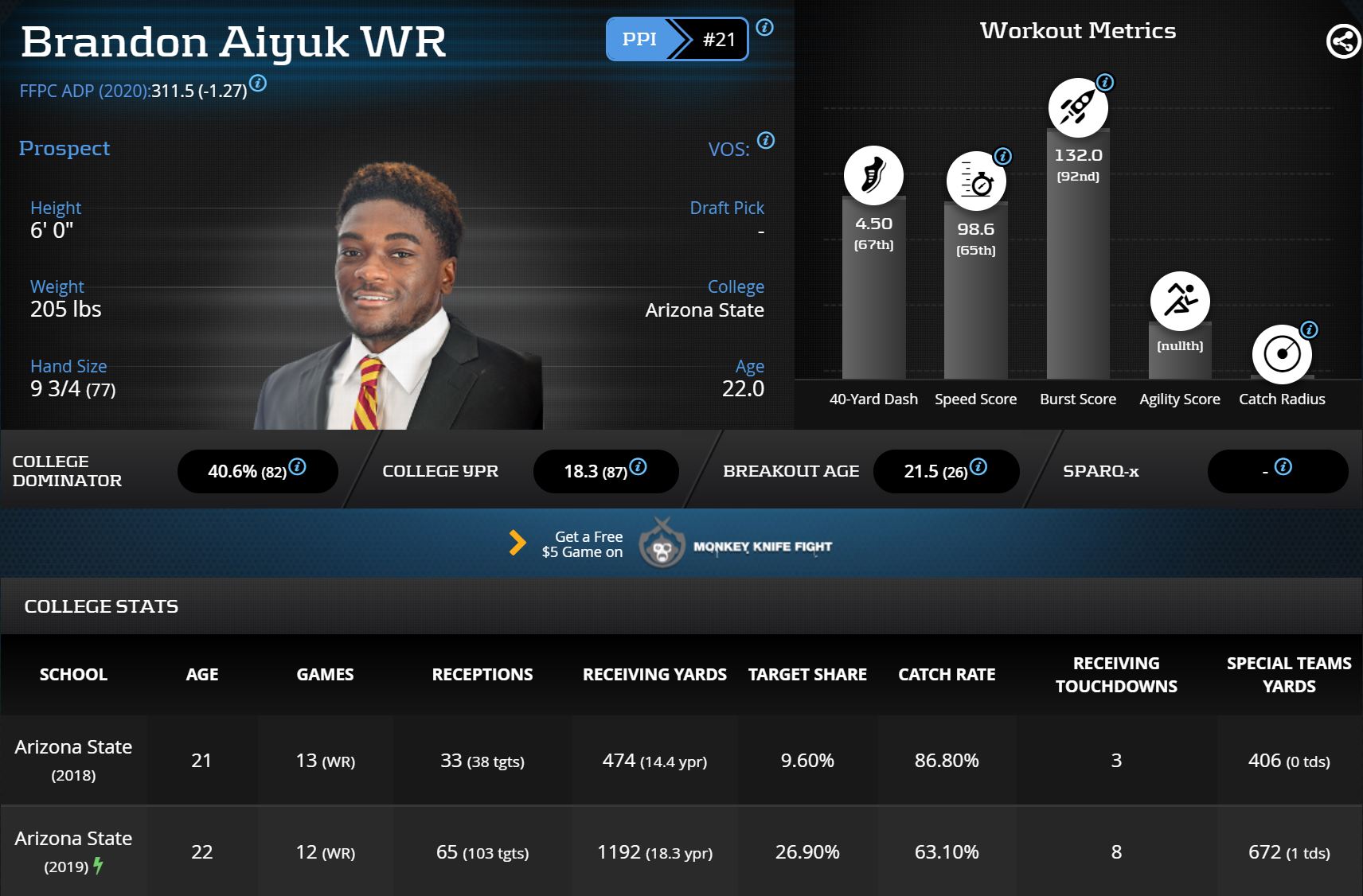 Aiyuk measured in smaller and ran slightly slower than expected at the NFL Combine, but still landed a 65th-percentile Speed Score while running a 4.50 (67th-percentile) 40-yard dash. He displayed elite explosiveness with a 40.0-inch Vertical Jump and a 128.0-inch Broad Jump. That translates to a 132.0 (92nd-percentile) Burst Score. Aiyuk makes use of his explosive traits as a dynamic weapon with the ball in his hands. He averaged 10.9 yards after the catch with 14 broken tackles in 2019. The Sun Devils also used him in the return game, where he averaged 31.9 yards per kick return and 16.1 yards per punt return–both Pac-12 highs–with one touchdown.

The dynamism is great but there are some red flags in Aiyuk’s profile, none more glaring than his 21.5 (26th-percentile) Breakout Age. Because he began his career at the JUCO level, Aiyuk was a late-bloomer and is one of those terrifying one-year-wonder prospects. When we look at NFL wide receivers using the Data Analysis Tool, the average Breakout Age among the top-24 scorers of 2019 in terms of PPR points per game was 19.5. The NFL average was 20.3. Basically, the odds are stacked against Aiyuk’s profile. On the field, he underwhelmed in contested catch situations. He caught only three-of-14 contested targets, a 25-percent rate. That is well below average among the wide receivers in this class.

Aiyuk projects as a Day 2 pick and some mocks even have him going in the first round. His age-adjusted production profile is a concern, but his yards after the catch ability and explosiveness in the return game will help him have an early impact at the NFL level, even if it means he won’t be immediately useful in fantasy. His long-term upside is as a WR3–or a WR2 on a thin depth chart. Draft him in the late second or third round of rookie drafts.