The auction draft format is the Old West of fantasy football drafts. Similarly untamed and without convention. Ultimately, a strong foundational plan is necessary for navigating through these uncharted territories.

I prepare for my drafts with a simple three-step process: build positional tiers, gather ADP data to predict budgets, and construct roster templates. This preparation provides an effective and flexible game plan for the fast paced and fluid nature of the auction draft.

First, create a tier for each position: QB, RB, WR and TE. Drafters should be comfortable spending near equal value on any player in any given tier. Additionally, they can track player values within tiers to spot trends and exploit pricing inefficiencies. For instance, I have Antonio Gibson as a Tier 2 RB. Yet, he’s projected to be priced as a Tier 3 RB; reap the value. Another example would be Tier 2 WR DeAndre Hopkins being priced as a Tier 1 WR; love him enough to let him go.

Below are my Tier 1 and Tier 2 RBs and the prices that they went for in a SuperFlex Dynasty Auction draft:

At this point in the draft, D’Andre Swift was the last player available in Tier 1, while Tier 2 RBs Dalvin Cook and Alvin Kamara had already been acquired.

Swift averaged 1.11 (No. 24 among qualified running backs) Fantasy Points Per Opportunity and 14.6 (No. 16) Fantasy Points Per Game as a rookie. Sitting atop the depth chart, this premier college prospect will have more opportunity to exhibit his exquisite all-purpose skill set. I bid aggressively to get him anywhere in the $100-$105 range, and I was fortunate enough to acquire him for a much cheaper price at $83.

I had successfully acquired a Tier 1 RB at a Tier 2 price. Mission Accomplished.

The goal in an auction draft is to to get the most player value out of the auction budget. Abiding by the tiers is crucial for accomplishing this goal because it allows gamers clearly identify undervalued and overvalued players alike.

It’s intuitive that players with high ADPs will cost more than players with low ADPs. An edge is gained by paying less for players that will perform as well or better than their more expensive, higher ADP counterparts. 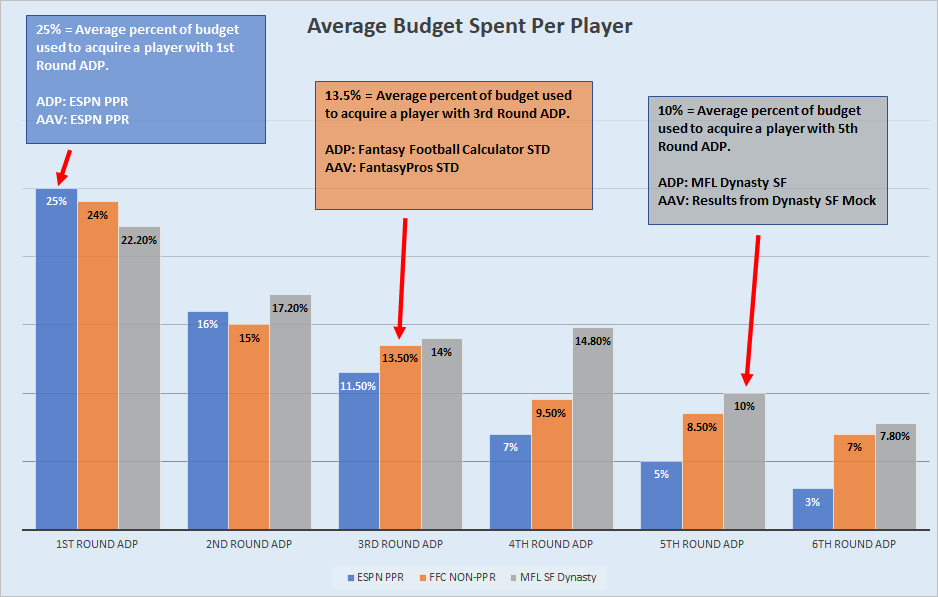 As expected, higher ADP equates to higher auction values. Using the ADP data against your rankings is the key to finding values in the draft. For example, your RB6 is a top-12 player, but ADP has him as a top-24 player. Therefore, it should be relatively easy to draft him because the market perceives him worthy of 16-percent of your total budget, whereas a top 12 player is worthy of 23.3-percent of the budget.

Player prices drop dramatically round-to-round in default settings leagues (1 QB, 1 W/R/T) because the demand for premium players is high due to fewer starting roster spots. However, it is more common to spend conservatively in a deeper format like SuperFlex because it is necessary to fill a roster with strong contributors through the early-middle to middle rounds.

Another nugget is that players in the eighth round and beyond are typically acquired for less than five-percent of the  total budget. Saving money for the late round players that can fill out the WR3 or W/R/T2 spot is especially important for those who spend heavily on the stud players.

Put it all together for a beautiful auction draft cheat sheet: 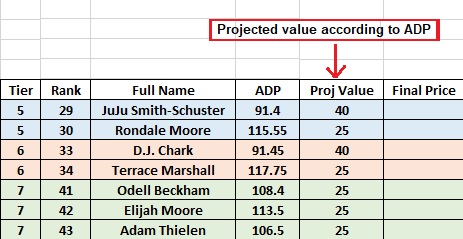 Use the cheat sheet to track values, exploit pricing inefficiencies and build a dream team.

The final step in preparing for an auction draft is to construct team templates. These are effective in keeping one honest during the bidding frenzy. Here is an example template that I used for a recent dynasty SuperFlex startup: 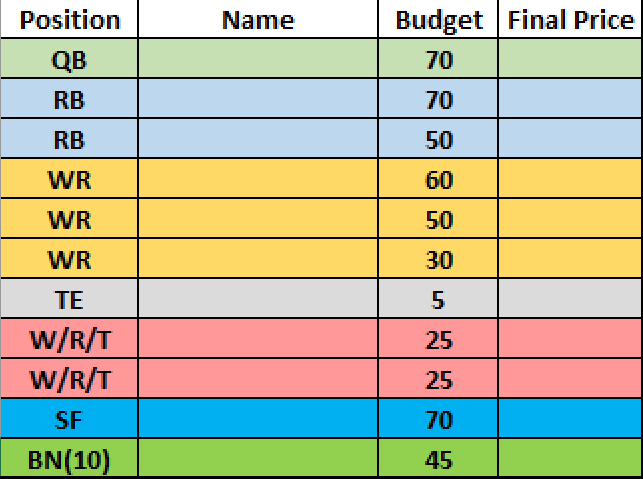 I used this template as a baseline for how I wanted to approach the draft. I had to add $13 to my RB1 slot and shed off $13 elsewhere after spending up for D’Andre Swift ($83). You can trim this from two of your WR spots, or maybe $13 off of your W/R/T2.

Someone had nominated Tier 1 WR CeeDee Lamb later in the draft. To my surprise, he was settling in at a Tier 2 price.

Use draft templates to visualize how your team is filling out and you won’t get caught with your pants down.

Putting It All Together

This three-step process for auction drafts is effective at finding values within groups of similarly ranked players. In essence, this is the goal in an auction draft; to draft the best players at the best prices. Thus, auction is the most exploitable format that enables drafters with the best chances to build a super team.

The unforgiving frontier can be tamed and it’s riches unearthed with this simple and easy to use system.