How to use PlayerProfiler Metrics to Spot Breakout Tight Ends 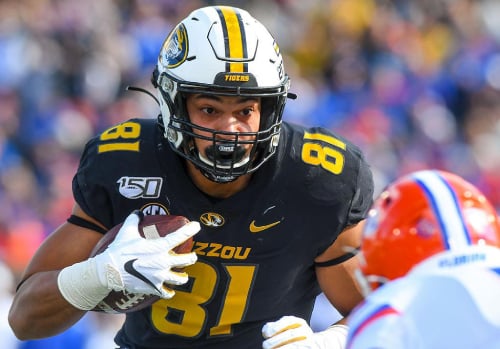 Which athleticism and college metrics are the best indicators of fantasy success? What do breakout tight ends have in common? Using PlayerProfiler’s Data Analysis Tool, we can answer these questions.

Athleticism matters a great deal for predicting fantasy success at the tight end position. Height-Adjusted Speed Score is the most important athleticism metric, followed by the agility drills (3-cone and 20-yard shuttle) that comprise the Agility Score and explosion exercises (broad/vertical jump) that comprise the Burst Score. Metrics such as Catch Radius, Athleticism Score, and SPARQ-x also do a good job of summarizing a player’s overall athleticism and predicting a tight end’s chances of NFL success. Draft capital, as always, is important. There are also certain thresholds for College Dominator (15-percent) and College Yards Per Reception (12.0) that we should aim our tight ends to meet. 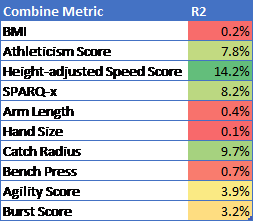 Still, not every metric is necessarily important. We can largely ignore BMI, Bench Press, Arm Length, and Hand Size for example.

I defined a tight end as having a breakout season if he had at least one season of 14 Fantasy Points per Game or more; approximately what Darren Waller and Mark Andrews posted last season. Using this threshold of FP/G, we get a sample of 14 tight ends. Of this group, only two of 14 (14.3-percent) had an Athleticism Score below 100.0. One of 14 (7.1-percent) had a 3-Cone time slower than 7.20 seconds, and two of 14 had a Speed Score below 100.0. The data also indicates that College Target Share is actually more predictive of fantasy success at the tight end position then College Dominator Rating. Still, draft capital is our biggest single indicator of success.

There seems to be a couple of thresholds of importance for college performance as well. Of our breakout TE sample, only one had a College Dominator Rating lower than 15-percent and only one failed to reach at least 12 Yards per Reception in college.

The general consensus is that the 2020 tight end class is weak. While that is true to a certain extent – T.J. Hockenson and Noah Fant were superior prospects last year, and the 2021 tight end class looks strong as well – this class has its share of strong prospects.

Reaching every athletic and college production threshold we look for, Cole Kmet looks like a bulletproof prospect. Being a second round pick in the NFL Draft also helps. While some may not believe he has the upside to be a difference maker, the fact is that he meets all of our criteria analytically.

Albert Okwuegbunam is intriguing. We don’t have his Catch Radius, and his 11.8 Yards per Reception fell just below the threshold we look for, but his 129.6 (99th-percentile among qualified tight ends) Speed Score and 31.2-percent (90th-percentile) College Dominator Rating indicate that he is poised to be a fantasy stud.

Colby Parkinson also looks underrated. He meets every threshold except for his 13.0-percent (33rd-percentile) College Dominator Rating, and he will play his rookie season at 21 years old, which is a known positive indicator for success. Parkinson also gets to play with one of the most efficient quarterbacks in football in Russell Wilson. He’s an excellent taxi squad candidate while he recovers from a Jones fracture.

Who can we fade in our rookie drafts? Harrison Bryant looks like the clear answer. While his college production was impressive, his Combine metrics severely underwhelmed. Bryant failed to meet any of our thresholds in the athleticism metrics.

If we’re looking for a higher-end bust candidate, Adam Trautman does not seem likely for success either. While his profile is intriguing, I’ll take my chances avoiding the small-school tight end with a sub-100.0 Speed Score.

Remember, just because a player doesn’t meet a particular threshold or performs poorly in a metric does not mean that he cannot have success in the NFL. We are working with probabilities, and there are always outliers. Still, using these metrics, we can increase our probability of finding a breakout tight end drafts, which is all we can ask for.