Courtland Sutton‘s days in the Paying Up section may be waning. Since Jerry Jeudy‘s return to the Broncos lineup Sutton has averaged only 39.5 Air Yards per game and amassed only 9.9 fantasy points over the past two weeks. Sutton finished behind both Jeudy and Tim Patrick in Air Yards last week seeing a season low 25 Air Yards. Facing off against a Eagles secondary that just limited the similarly utilized Mike Williams to less than double digits fantasy points, Sutton should be viewed as a tournament only play for week ten.

Devonta Smith graduated into the Paying Up Section after two consecutive weeks as the top Air Yards Value play under $5,500. Smith delivered last week finishing as the WR2 with 22.6 fantasy points.

Reagor had the only other target for -6 recYds 🤯

This week, Smith faces a Denver secondary that held both Amari Cooper and CeeDee Lamb under double digits fantasy points last week. However, he should still be rostered in some tournament lineups based on his usage in the Eagles passing game. 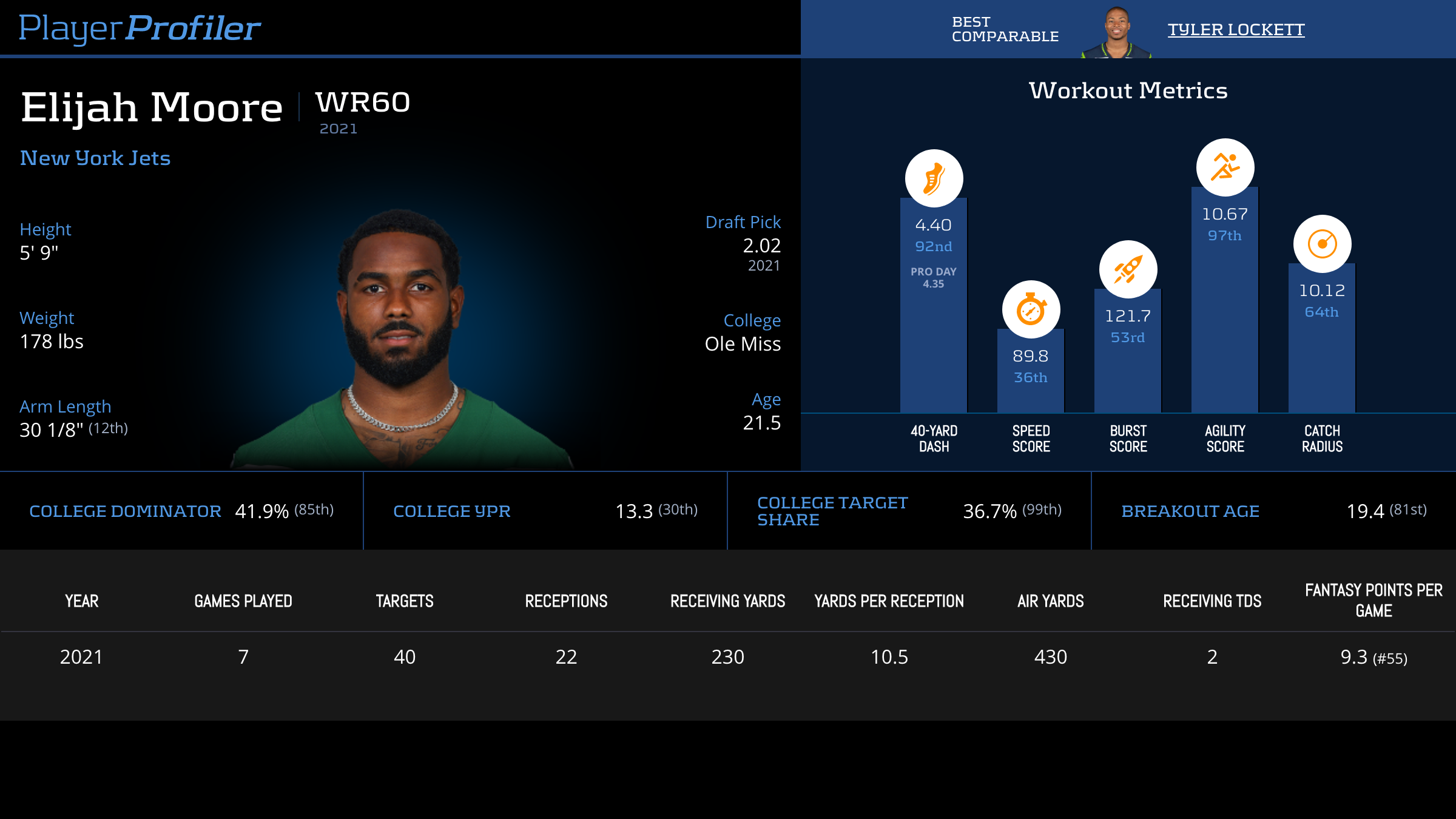 While the rookie’s breakout may be stymied by the return of Corey Davis to the lineup, Moore remains a viable play in all formats with the hopes that he will continue to see the field and continue to see a similar Hog Rate as the aforementioned Davis.

Zach Pascal finds his way on the Air Yards Value List in large part due to his Week 9 usage. Pascal saw 142 Air Yards last week, which accounts for over 30-percent of his entire cumulative Air Yards on the season. Despite such usage, Pascal was unable to score more than double digits fantasy points, catching only four receptions for 58 scoreless yards. However, with an 85.0-percent (No. 22) Snap Share and seeing almost six targets per game, Pascal makes for a worthy cash play at the receiver position.

Last week, Tim Patrick was recommended as a preferred cash play in DFS. He did not disappoint and fortuitously hauled in a 44 yard touchdown against the Cowboys. This usage helped him lead the Broncos with 91 Air Yards and finish as the WR10 scoring 18.5 fantasy points.

Patrick surprisingly out targeted Courtland Sutton, which should be more of a anomaly than a trend. Still Patrick remains a solid cash play due to his consistent usage in the Broncos passing attack.

Christian Kirk capitalized on the absences of DeAndre Hopkins and A.J. Green last week by posting a 94.1-percent Snap Share, which may have contributed to Kirk posting 16.42 fantasy points in Week 9. However, despite the increased Snap Share, Kirk’s opportunities did not increase likely because the Cardinals held a commanding led against the 49ers for the majority of the game.

While the Cardinals are heavily favored this week against the Carolina Panthers, Kirk could still be in line for heavy snaps with Hopkins, Green, and Rondale Moore questionable to play. He remains a recommended play in all formats.

Marquez Callaway delivered as a cash option in Week 9, posting 11.5 fantasy points and finishing as the WR25. He is still vastly outproducing teammate Tre’Quan Smith in Air Yards since Smith’s return to the lineup. However, Kenny Stills surprisingly leads the Saints in Air Yards since Week 7, posting 205 Air Yards compared to Callaway’s 191 Air Yards. With all this uncertainty regarding opportunity in the Saints receiver corps, Callaway can’t be trusted as anything more than cost savings cash play.

A.J. Green missed last week as a result of being placed on the COVID list. He was recently activated off the list this morning. If DeAndre Hopkins sits, Green, averaging 66.5 Air Yards per game, is just as likely a bet to lead the Cardinals in Air Yards as Christian Kirk, who is averaging 63.1 Air Yards per game. Green is priced $900 less than Kirk making him a much better value and the preferred option among Cardinals receivers in all DFS formats.

I present to you my entire thoughts on this week’s Robby Anderson quagmire: Nope, not this week! But wait, maybe P.J. Walker can save him! (Looks at the games Walker started last season and Anderson’s production in them, all two of them!). Ok, I see a double-digit fantasy performance in Week 11 of 2020. (Looks at Anderson’s game log in 2021). Looks like that would amount to half of Anderson’s double digit fantasy performances in the current season through nine games. Yeah… I’m back to nope.

Corey Davis appears set to return after missing the past two games with a hip strain. Davis was the Jets’ primary option in the passing game prior to his injury amassing a 33.4-percent Air Yards Share and averaging 7 targets per game. Davis faces a tough Bills secondary this week, however, at only $4,900 he is an absolute steal on DraftKings based on the amount of volume he is likely going to see in this game with the Jets presumably playing catch up against the Bills. Play him in all formats.

Nelson Agholor posted a doughnut last week scoring zero fantasy points. However, this wasn’t just any doughnut but a Air Yards free doughnut as Agholor saw zero targets last week. He should revert to his field stretching, deep target seeing ways in week ten, and is best played as a desperation tournament dart throw only.

Jakobi Meyers has posted three consecutive games under double digit fantasy points and hasn’t finished as a top 24 wide receiver on the week since week four. However, he continues to see significant target volume in the Patriots offense averaging 8 targets per game.

Still without a touchdown on the season, and an unlikely bet to score this week, Meyers remains a recommended salary saving cash game play.

Good luck to everyone in Week 10. May all your Air Yards be realized.