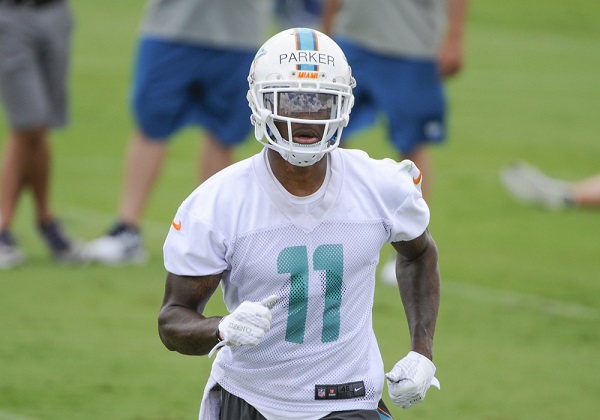 Fantasy owners are always looking for the next Odell Beckham.  We all want that next waiver wire folk hero that helped us dominate our league because we were savvy and either drafted him late (and stashed him) or were able to grab him off the wire before he blew up (or maybe you were lucky and were able to get him with a high priority waiver claim).

It’s a big part of the reason that some owners are reluctant to part ways with Breshad Perriman, currently Player Profiler’s 97th-ranked wide receiver in the seasonal rankings.  His intrinsic ability makes him a potential league-winner, and the fact that the Ravens had as much trouble moving the ball in Week 1 as they did will bodes well for his chances of seeing playing time when he returns.  But would it surprise anyone if the Ravens eventually announced that he’s going to have season-ending surgery to fix this mysterious PCL injury that has kept him sidelined for over a month?  He’s currently expected back by October, a realistic scenario.  Breshad Perriman can probably be safely let go by fantasy teams with more immediate needs (Dez Bryant owners?).

This week, a number of fantasy owners abruptly dropped a handful of players that will likely be fantasy difference-makers down the stretch.  Those who plucked Odell Beckham from the free agent list last season recall how this process works.  Those who dropped OBJ after week 1 remember it even more vividly.  Draft exciting rookie.  Exciting rookie receives 1 target.  Drop exciting rookie.  Rinse.  Repeat.

Like Beckham in 2014, a handful of 2015 rookie wide receivers remain in a position to be able to help fantasy owners win playoff match-ups.  Additionally, an overreaction to muted week 1 performances has rendered these WRs either particularly affordable (or even free) heading into week 2.  Here are some league-winning wide receivers who may be available in your league’s free agent pool.

The Dolphins are slow-playing DeVante Parker, and rightfully so.  They chose him with the 14th overall pick in the 2015 NFL Draft, and his comparability to A.J. Green ensures that he will eventually surpass the likes of Rishard Matthews and find his way to the top of the depth chart.  But a foot injury he suffered in college and reinjured during OTAs has kept him off the field for the majority of the preseason.  And he only played one snap in his NFL debut as a result.

It may surprise some people that Miami’s offense struggled more than they should’ve against the Redskins in Week 1.  I wonder if it’s because the one receiver who projects as an eventual WR1 in fantasy was limited to one snap on offense.  Once DeVante Parker is up to speed and ready to contribute more steadily, the fantasy numbers of everyone in Miami’s offense will benefit.

But as the receiver with the highest probability of missing time in 2015 due to injury per Sports Injury Predictor, the Dolphins are right to be slow-playing DeVante Parker.  Which is why you need to acquire him now before he’s ready to roll at full speed.

Dorial Green-Beckham was supposed to be the next Calvin Johnson.  After falling to the second round of the 2015 NFL Draft due to the dreaded character concerns, where the Titans happily scooped him up to pair with Marcus Mariota, it’s fair to wonder how much of an impact DGB could possibly have in his rookie season.  After all, he hasn’t played a down of meaningful football since 2013.

Much like the Dolphins are doing with DeVante Parker, the Titans appear to be slow-playing Dorial-Green Beckham.  Despite only playing nine snaps in the season-opening blowout win against the Bucs, DGB is aided by the fact that the Titans are only carrying four receivers on their roster.  One of them is Justin Hunter, whose poor play in a full time starting role helped the Titans rank 23rd in receiver efficiency per Player Profiler in 2014.  Another is Harry Douglas.  But while Douglas can’t compare to DGB physically, he does have a built-in advantage as it relates to early season playing time.

Players like Harry Douglas, James Jones in Green Bay and Greg Jennings in Miami, are veteran receivers who weren’t signed by teams to sit at the end of the bench.  Once a veteran receiver reaches a certain point in his career, he should be expected to see a good amount of playing time in the early part of the regular season when signing with a team as a free agent.  So while Dorial Green-Beckham may take a while to crest the nine snaps he saw in his NFL debut, it will also make him easier to acquire if he hasn’t already been dropped.  If Marcus Mariota turns out to be the real deal, DGB has the potential to be an absolute monster once he works his way past the uninspiring Harry Douglas and the inefficient Justin Hunter to join Kendall Wright at the top of the depth chart.

Phillip Dorsett’s best comparable player per Player Profiler is Brandin Cooks.  It’s one of the closest rookie WR comps in the Player Profiler database, which makes the fact that Cooks’ best comparable player is T.Y. Hilton even more intriguing.  Hilton is likely going to be a game-time decision for Monday Night Football.  And in spite of a rough NFL debut that included both a fumble and a drop, the rookie Dorsett is going to be in line for a massive spike in opportunity for as long as Hilton would be out.

Per Stampede Blue, T.Y. Hilton was third among Colts receivers in Week 1 snaps with 52.  There’s reason to believe Phillip Dorsett would see at least that many snaps as the team’s third receiver.  Dorsett’s build is nearly identical to Hilton’s, but Dorsett wins the battle of athletic measurables.  And the fantasy value he would gain as the likely “stretch-x” receiver in three-wide sets could be bigger than people anticipate.  Even if Hilton plays on Monday night, a continued decline in efficiency from Andre Johnson could see Dorsett start to earn meaningful snaps alongside Hilton and the ultra-sexy Donte Moncrief sooner than later.

It may be a risky gamble for tournaments, but I’m planning on utilizing at least one Andrew Luck–Phillip Dorsett stack (while having enough money left over to upgrade to Donte Moncrief if T.Y. Hilton suits up).

Now is the best possible time on the fantasy football calendar to stash and hoard upside.  Get Devante Parker.  Get Dorial  Green-Beckham.  Get Phillip Dorsett.