2017 NFL free agency is nigh. Wide receivers like Alshon Jeffery, Kenny Stills, and Terrelle Pryor are set to test the waters of free agency. It is too early to tell whether their respective teams will resign them or let them go play football in someone else’s laundry. However, if all three players step down from their respective teams there are several promising players ready to step up into their roles and inherit the targets left behind to become fantasy mana from heaven.

Below are a couple players in a prime position to inherit Targets and Target Shares assuming the free agent on their team leaves in free agency.

Chris Whitman previously mentioned both of these wide receivers as dynasty buy low targets; however, the departure of Kenny Stills would only increase the prospective value of both receivers.

While Leonte Carroo did not see the field much in his rookie season, a Kenny Stills departure would allow his 63.9-percent (99th-percentile) College Dominator Rating and 96th-percentile college yard per reception a chance to see regular playing time with the Dolphins on the outside in three wide receiver sets. As previously noted at Rotounderwold, Carroo’s College Dominator Rating places him in elite company among active players.  Unlike Stills, Carroo can both stretch the field and play a role as a target in the middle of the field evidenced by his Jarvis Landry-esque 28.6 BMI. He is, being appreciably more athletic, better suited as a slot/flanker than Jarvis Landry. Perhaps with more playing time to display his dominance Carroo may even overtake Landry as the Dolphins slot/flanker.

If Alshon Jeffery leaves via free agency the Cameron Meredith dance party is set to become a full blown rager in 2017. While some fantasy prognosticators may be killing each other to acquire Kevin White, the fact remains that Meredith has been the more productive and efficient wide receiver evidenced by a +14.6 (No. 21) Production Premium when compared to White, and has assumed the role of Bears No. 1 wide receiver. Already out targeting Alshon Jeffery, over the course of the season and on a per game basis, Meredith, and his 10.32 Catch Radius (95th-percentile), is set to inherit a potential monster workload which could allow him to see over 25-percent of the Bears targets in 2017. Amassing fantasy points at a rate of 1.87 points per target in 2016 Meredith is a no doubt wide receiver 1 with Jeffery no longer on the Bears in 2017.

Marquess Wilson was active for 2 full games last season quickly succumbing to injury in his 3rd game. Injury risk will again be a concern in 2017 with Wilson, however, it may be a risk worth taking if Alshon Jeffery jumps ship. While Wilson’s athleticism, 90.4 (8th-percentile) SPARQ-x Score, leaves fantasy players desiring much more, a 100th-percentile Breakout Age does not happen out of nowhere. In fact, Aaron Dobson aside, this places Wilson in elite company among active NFL wide receivers. 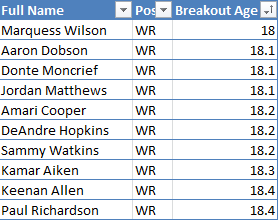 Further, in his two games active in 2016 Wilson out targeted Cameron Meredith and had a higher Hog Rate. While Wilson is nowhere near the No. 1 WR conversation, his 10.98 (74th-percentile) Agility Score and a 10.10 (67th-percentile) Catch Radius make Marquess Wilson an interesting stash as he could jump over Kevin White as the number 2 receiver on the Bears in 2017, which, as Meredith showed last year, can produce fantasy value.

While Corey Coleman’s ascension to a top fantasy wide receiver would be a foregone conclusion in 2017 with Terrelle Pryor gone, 141 targets up for grabs creates too much opportunity potential for one player alone to suck up.

In steps Ricardo Louis and Rashard Higgins. Both members of last year’s draft class Louis and Higgins are polar opposites when it comes to prospects. Louis is a size speed freak at 6-3 running a 4.43 40-yard dash, which translates into 113.2 (93rd-percentile) Height-adjusted Speed Score (HaSS). However, Louis was unable translate his athleticism 118.3 (84th-percentile) SPARQ-x Score into elite college production evidenced by a 31.6-percent (54th-percentile) College Dominator Rating). Higgins, on the other hand, ranks near the bottom in every athletic measurable 85.9 (3rd-percentile) SPARQ-x Score but was able to overcome his deficiencies in athleticism to quickly ascend and dominate in college demonstrate by a 43.6-percent (85th percentile) College Dominator Rating and a 18.9 (92nd-percentile) Breakout Age.

Looking at the type of player both Ricardo Louis and Rashard Higgins would be replacing in Pryor, Louis is by far the preferable stash as his athleticism and measurables compare closer to (and even exceed) Terrelle Pryor’s. Louis, like Pryor, has the ability to stretch the field and soak up the Air Yards as a result. Further, at 6-3, like Pryor (6-4) he is the preferable red zone target perhaps even over Corey Coleman, if you squint hard enough due to size. However, in the event that Louis fails to produce, Higgins can certainly leap frog him as the Brown’s No. 2 receiver. In that situation, Higgan’s may see value in an offense expected to see plenty of negative game scripts in 2017. Expectations should certainly be downgraded when compared to Louis, as Higgins athletic measurable may make NFL success hard to come by. However, if you were to to a gamble and stash an unathletic receiver in the Willie Snead or Jarvis Landry mold, stashing one with a higher College Dominator Rating than both would be the stash to make.