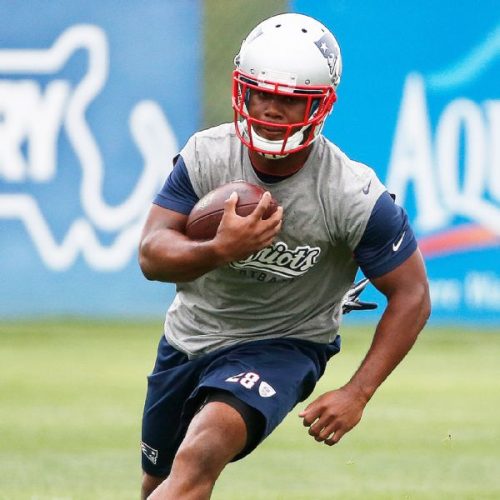 Continuing on the series of tracking down some of the top pass-catchers in the red zone for the 2016 fantasy football season, we now take a look at “receiving” backs, who are being titled as such for this article because all we are concerned about is their pass-catching ability. Forget red zone carries, rushing touchdowns, and anything else that doesn’t indicate a running back’s ability to turn red zone targets into touchdowns.

Having already looked at what has been dubbed the RZTD (red zone targets to red zone touchdown percentage) for wide receivers and tight ends, this article is all about the running backs who caught their red zone targets and turned them into touchdowns.

Before we dive head first into this article, it should noted that out of all the running backs in the NFL, only 12 running backs were targeted 10 or more times on passing plays down in the red zone. The only two players left off of this list are Darren Sproles (13 red zone targets, one touchdown, 8-percent RZTD) and Ty Montgomery (11 red zone targets, zero touchdowns, 0-percent RZTD).

Just like that I have already managed to fit the show players who weren’t supposed to be in the article into the article. Having already done that, here are your true top 10 RZTD “receiving” backs from 2016.

We need to get through the first batch of underwhelming RZTD numbers before we find our gems in this article. It will be quick and painless.

Bilal Powell managed to find his way into the top 10 strictly because he met the minimum targets requirement. Bilal Powell converted 11 red zone targets into one receiving touchdown in 2016, but did most of his damage following the injury to veteran running back Matt Forte.

The New York Jets boasted a 126.5 run blocking efficiency rating (No. 6) in 2016. A mauling offensive line propelled Bilal Powell into space despite average athleticism.  Heading into 2017, Powell could once again play the role of unlikely league winner for fantasy owners late in the season.

No running back in the league saw more red zone targets in 2016 (18) than Devonta Freeman. Devonta Freeman turned those 18 targets into three receiving touchdowns down in the red zone, but is no doubt an explosive receiver out of the backfield.

Despite his low 17-percent RZTD in 2016, Devonta Freeman is a prime candidate to improve on that number next season. He managed to haul in 13 of the 18 red zone targets thrown his way, and the fact that he was targeted as much as he was shows the trust the Falcons have in him inside the 20-yard line.

DeMarco Murray received 16 red zone targets last season with the Titans and turned three of those targets into receiving touchdowns.

Like Devonta Freeman, DeMarco Murray is another favorite to improve on his RZTD from 2016, given that his 16 red zone targets were the second-highest total among running backs last season. The biggest threat to DeMarco Murray is Derrick Henry, who should be appearing a little closer in the rear view mirror at the start of training camp in 2017.

You could make an argument for Le’Veon Bell being the best running back in football. The fact that Le’Veon Bell missed four games didn’t hurt his production on the field whatsoever. Bell finished 2015 with 1,268 rush yards, 616 receiving yards and 75 receptions. He saw 10 red zone targets in 2016 and scored on two of them, but nobody should be discouraged by a low RZTD out of a player who is targeted as often as Le’Veon Bell is (94 targets in 2016, no. 2 among RB).

With a 15.4 average draft position (ADP) in 2016, Le’Veon Bell pleased fantasy owners across the world with his league best 26.4 fantasy points per game, and a +17.8 VOS. With only 10 red zone targets in 2016, Le’Veon Bell just made it onto this list, but he deserves to be on any list involving top 10 running backs for the next few seasons.

What more do you want to know about running back David Johnson, other than the fact that he is the total package, and nearly made NFL history in 2016 in his attempt to be the third running back ever to amass 1,000+ rushing (1,239) and receiving (879) yards.

Having seen only 13 red zone targets in 2016, David Johnson made his bank in a handful of other ways, simply by being the best offensive player on the field anytime he was between the hashes. Of the 20 touchdowns David Johnson scored last season, 14 of them came by way of rushing touchdowns in the end zone, while three of them came on red zone receiving touchdowns. Regardless of how he is finding the end zone, David Johnson is a player you want on your fantasy team for years to come. Especially in the red zone.

We have finally cracked the 30-percent RZTD among running backs for the 2016 season, and it comes in the form of former Heisman Trophy winner Mark Ingram.

Prior to last season, Mark Ingram had never been targeted more than five times in the red zone, and this season marked the first three receiving touchdowns of his career down in the red zone. Yes, prior to this past season, Mark Ingram had a RZTD of 0-percent on 13 red zone targets. Ingram plays in an offense that loves to spread the ball around to a number of players on offense, and made work running behind the best run blocking offensive line in the league (140.6).

Given his previous RZTD of 0-percent over his first five years in the league, it wouldn’t be surprising to see Mark Ingram regress to a less-targeted back in the red zone in 2017, especially when you consider his fellow running back teammates (SPOILER ALERT).

Who is the more talented back in Atlanta? Tevin Coleman. And while his RZTD percent is higher than that of Devonta Freeman, there are plenty of other reasons to support this notion.

Tevin Coleman saw his fair share of opportunities in 2016 (44.7-percent snap share), and managed to reel off the eighth most receiving yards among running backs (421). Coleman posted an incredible +50.9 Production Premium last season, out performing Devonta Freeman‘s +15.1 Production Premium. His 11 total touchdowns were good for the ninth highest total among running backs, and his 14.7 fantasy points per game was the 13th highest in the league. Tevin Coleman also managed 6.3 yards per touch (no. 7 in 2016) and was seventh in the league with 1.21 fantasy points per opportunity.

Nothing about Tevin Coleman is a fluke, and there will soon be a changing of the guard in Atlanta, where it will be Tevin Coleman, not Devonta Freeman, who dominates the majority of the opportunity in the Falcons backfield.

Theo Riddick was eighth in targets last season (67) and sixth in receptions (53) among running backs, and managed to turn a solid 13 red zone targets into five receiving touchdowns.

Given his college days at Notre Dame, Theo Riddick is no stranger to being a lead target in a team’s passing attack evidenced by a 13.7-percent College Target Share (90th-percentile). Riddick spent a good portion of his time as a wide receiver in college, so it’s no surprise to find him near the top of this RZTD list for running backs.

With a career RZTD of 29-percent, Theo Riddick is the first real model of consistency on this list among running backs for this category. His history of pass-catching out of the backfield is the only reason fantasy owners draft him, because his career yards per carry average of 3.5 isn’t cutting it. Theo Riddick managed to turn a +20.5 Production Premium in 2016 (No. 16), and his 16.2 fantasy points per game last year cracked the top 10 among running backs, coming in at eighth in the category.

While he doesn’t lack the traditional ability out of the backfield as a running back, Theo Riddick is a savior for owners in PPR leagues, and playing on a pass heavy offense like the Detriot Lions will always yield plenty of opportunity for the former wide receiver.

While Mark Ingram is one representative for the New Orleans Saints on this list (30-percent RZTD), it’s Travaris Cadet who out-performed his fellow teammate in 2016 in RZTD.

Travaris Cadet, who is another running back with a career RZTD of 29-percent took four of his 10 red zone targets into the end zone last season.There is a good chance that Cadet doesn’t find himself anywhere close to this list in 2017, as the veteran running back has played for three different teams in five seasons, and is just hoping to be on a roster next year.

Travaris Cadet did average 6.8 yards per touch last season (no. 5 in 2016), posted a +45.1 Production Premium (No. 3) and 1.62 fantasy points per opportunity (No. 1), but those numbers are slightly skewed by his 44 total touches last season (four rushes, 40 receptions). If Cadet does end up on the Saints next season, he will be nothing more than a player to hold should injuries be incurred by several of his backfield teammates.

After seeing his historic performance in Super Bowl LI, is there any wonder than James White is topping out this list as the top RZTD running back of 2016?

With the highly efficient offense run by the Patriots, and the team’s unprecedented ability to interchange running backs in a variety of ways, James White is almost the only realistic option to reach the pinnacle this list for 2016. White is yet another player who dominated in the passing game at the college level evidenced by a 12.1-percent College Target Share (84th-percentile), and 6.5 College YPC (85th-percentile).

Last season, James White averaged an absurd 7.2 yards per touch (no. 2 in 2016), and was targeted 86 times last season (No. 3). His 551 receiving yards ranked third in the league among running backs as well, while is +48.3 production premium was the second highest for his position last season. At the end of the season, it was James White who peaked the top 10 RZTD list for running backs in 2016, converting six of his 12 red zone targets for scores.

Normally, one would be inclined to be high on a player who just churned out a season like James White did for the Patriots last season. After White was the “real MVP” of Super Bowl 51, you would think he has to be rewarded with another opportunistic season in 2017. But Bill Belichick has shown little loyalty to players on his team, and it wouldn’t be shocking to wake up one morning and find White donning a different jersey in the near future.

But we are going to be optimistic as we head into another NFL offseason, and say that if James White is on the Patriots at the start of the new season, absolutely implement him in your Zero RB strategy, and get him on your team as you prepare for a championship run!