Why Riley Ridley should have skipped the NFL Scouting Combine 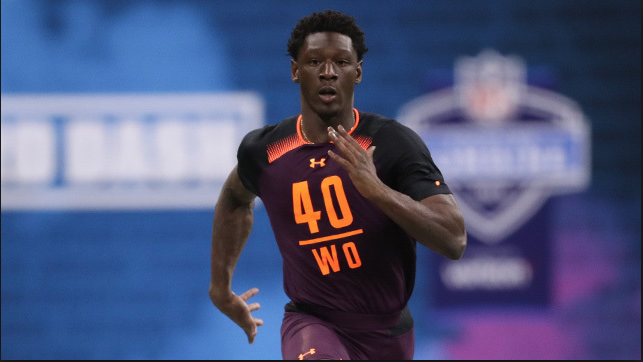 Georgia WR Riley Ridley divided Twitter at the beginning of 2019. On one end, film grinders couldn’t get over how crisp his curl routes were. On the other end, analytics touts couldn’t get over his complete lack of college production. The two sides battled back and forth with no end in sight, but then something magical happened. The NFL Scouting Combine set the record straight.

Before we get there, let’s backtrack. In February, Bucky Brooks had Ridley as a top-5 WR prospect, citing his “strong hands and precise route-running ability.” WalterFootball had Ridley as their eighth-ranked receiver due to his “skill set and polish.” CBS even had Ridley as a top-60 prospect overall. The common theme for his truthers is his route running, which is a learned skill.

Film grinders continue to drool over this skill and ignore many other factors that make a good receiver. While not every player develops route running at a young age, players who spend more time in college do. Think about the poster-boy route-running savants from the last few draft classes: Anthony Miller in 2018, Cooper Kupp in 2017, Sterling Shepard in 2016.

All of these receivers spent 3+ years in college and all hit the NFL at the age of 23 or later. It is logical that they know how to run routes because they spent extra seasons getting coached up rather than hitting the league early. At the very least, all of these receivers found a way to use their skillsets at the college level. They all had College Dominator Ratings in the 60th-percentile or better and all had prolific final college seasons. Ridley had none of that.

Ridley’s College Dominator Rating checks in at 22.2 percent, with most of that coming from his nine touchdowns. Unfortunately for the Georgia product, the only “productive” players with a College Dominator that low are Tyreek Hill (19.4 percent), Martavis Bryant (18.5), Cordarrelle Patterson (17.4), Danny Amendola (16.1), and Chris Hogan (15.4). With the exception of Hill, who possesses other-worldly athleticism, all of these players have failed to separate themselves as alpha receivers in the NFL and settled for complementary roles. 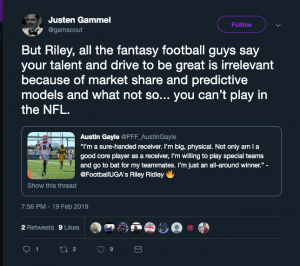 None of this seemed to matter to most film grinders, who scoffed at the nerds and their stats. Then Ridley gave analytics gurus even more ammunition by posting one of the worst Combine performances since Laquon Treadwell.

Players like Ridley and Treadwell need to fire their agents for letting them even show up to the Combine. They have stopwatches. They know what kind of numbers they are going to post on an average day. If people think you’re a savant in college and grade you as a top-end prospect like Ridley, don’t bother performing even testing athletically. Unless you hand in a performance like D.K. Metcalf, who knew he was going to blaze, you only stand to lose draft capital.

Ridley likely plummetted his draft stock, as he proved the only thing he has going for him is a curl route. He isn’t even an average athlete by any metric, he didn’t break out until his age-22 season, and most of his peers have better stat lines in their final season than he had in his career (69/1015/13).

While the crew at CBS dropped Ridley in their rankings following his abysmal Combine figures, WalterFootball has doubled down, bumping him up to their sixth-ranked receiver. Maybe GMs will ignore logic like WalterFootball, but things are looking bleak for Ridley.