Wide receivers get all the dynasty love in the world.  Running backs have been fawned over in redraft for as long as fantasy has been around.  Quarterbacks get all the money, accolades, and Papa John’s commercials.  Where is all the love for tight ends?  Admit it – other than my AFC version of this article – AFC Tight End Watch List, TMZ articles on Gronk’s party cruise has been the most you’ve read about tight ends since your league’s championship.  I promise even brunch on Gronk’s cruise ship was more exciting than this article, but since none of us can live the life Rob Gronkowski lives, we’re left to play fantasy.

For a tight end acquisition strategy refresher, please re-read Matt Kelley’s piece from August 2015 on Positional Fragility Rates to understand why tight ends are the most fragile of the four major positions, even more so than running back.  With that risk in mind, also read Ray Marzarella’s August 2015 piece Late Round Tight Ends on why drafting tight ends late is the best strategy.  Note in Ray’s August article on late round tight ends he correctly identified the ascent of both Austin Seferian-Jenkins and Tyler Eifert.

While high upside back-up running backs such as Jerick McKinnon and Tevin Coleman are dynasty league bench keepsakes, numerous über athletic backup tight ends languish in free agent pool, though the thought process is virtually identical.  In each case you’re attempting to capitalize on the injury volatility at the position by investing in high upside backups who could thrive because of their athleticism but are cost controlled due to the depth chart.  Most back-up running backs are rostered in dynasty leagues.  The market inefficiency lies with tight ends who can usually be had for nothing.  Here are three inexpensive tight ends in the NFC who I am stashing across my dynasty leagues that could pay huge dividends.

MyCole Pruitt is my favorite tight end on this list. He was just drafted in 2015 in the 5th round out of Southern Illinois. Although he sparingly saw the field as a rookie, there is plenty to be excited about in Pruitt’s profile.  He was undoubtedly the most athletic tight end in the 2015 class, having posted a class best 4.58 (90th-percentile) 40-time to go along with a 125.5 (85th-percentile) Burst Score , and a 110.5 (83rd-percentile) Height-adjusted Speed Score (HaSS).

Some might assume since he fell to the 5th round that MyCole Pruitt is merely a product of the weight room but that’s not the case. Pruitt boasted 37.6-percent College Dominator Rating (96th-percentile) at Southern Illinois, racking up 81-receptions for 863-yards and 13-touchdowns in 12 games his senior season.  Pruitt also broke out at 19.5 years old (89th-percentile), and produced in all four years, proving both his durability, consistency, and ability to stay on the field.

Kyle Rudolph is currently ahead of him on the depth chart, but that is a point in Pruitt’s favor given Rudolph has posted zero TE1 seasons in his career.  How Rudolph got drafted in the second round with a 4.88 (18th-percentile) 40-time and a 11.5-percent (25th-percentile) College Dominator could be its own article.  Even if Rudolph remains the Vikings’ in-line tight end for the foreseeable future, Rudolph and MyCole Pruitt offer different skill sets.  Kyle Rudolph has leveraged his size to become an effective red zone target and run blocker, but he is only seven pounds heavier than Pruitt.  Rudolph dominated the snap share last year (96-percent) and managed to play in all 16 games, but has a litany of injuries in his history including multiple sports hernia surgeries, a concussion, a sprained ankle, and a fractured foot. Pruitt was both durable and productive in college and could thrive after a full year of NFL experience.  Pruitt projects to be productive as a compliment to Rudolph as a pass catcher and eventually supplant Rudolph as the team’s primary tight end.  Much like Austin Seferian-Jenkins combination of athleticism and a great young quarterback have his dynasty owners excited, I believe Pruitt could quickly ascend into the top ten if given the opportunity.

Niles Paul is another young, athletic tight end who checks all the boxes who can be targeted for cheap in dynasty.  Paul is still only 26 years old despite having just come off a lost year to a fractured foot in preseason and remains off a lot of owner’s radars.

Niles Paul also transitioned well to the NFL and his new position.  In 2014 he only received a 58.8-percent Snap Share in 15 games, turning that into 39-receptions for 507-yards.  If you look closer at his efficiency metrics in 2014 you’ll come away more impressed. He was able to post a +13.2 (No. 10) Production Premium, a +12.7 (No.16) Target Premium, and an impressive 75-percent catch rate.  Paul has already tasted success at the highest level, and this year off affords him the opportunity to continue to bulk up and learn the nuances of the tight end position.

Standing in Niles Paul‘s way on Washington’s depth chart is elite tight end, Jordan Reed.  After leading all tight ends in fantasy points per game in 2015, Reed has demonstrated immense talent.  He is also one of the most injury ravaged players in the league, having frequently battled both soft tissue injuries and concussions most of his career.  The time to buy Niles Paul is now while the siren’s song of a healthy Jordan Reed beacons. 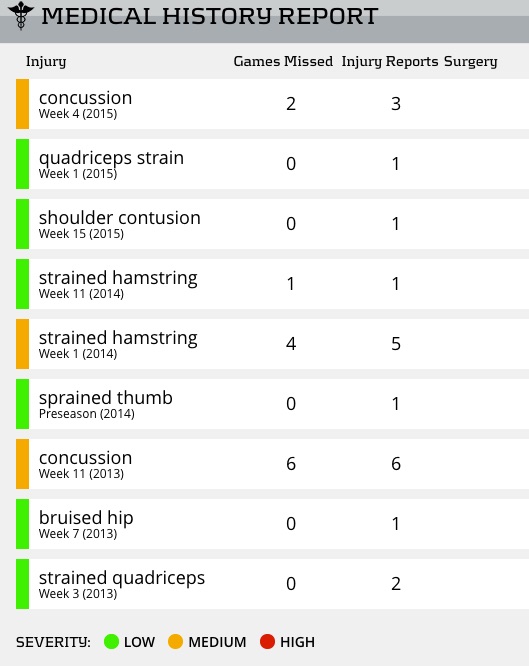 Unlike Paul and Pruitt, Vance McDonald currently sits atop his team’s depth chart.  McDonald possesses the adequate size to be a legitimate every down tight end at 6-4, 267-pounds and 34.75-inch (91st-percentile) arms.  McDonald is an above average athlete in every athletic metric besides Agility Score where he merely rated as average.  His 129.6 (94th-percentile) SPARQ-x highlights his well-rounded athleticism.

Vance McDonald is Brent Celek 2.0 (in a good way)

Vance McDonald also posted a 26.6-percent (82nd-percentile) College Dominator Rating and broke out at 20.2 (77th-percentile).  His productivity continued into the pros, albeit in a small sample size.  He received a 74.5-percent snap share over 14 games and turned in 30 receptions for 326-yards and 3-touchdowns.  Although the raw counting stats aren’t impressive, he was behind Vernon Davis for much of the year.  The 49ers offense was also a dumpster fire for most of the year, so you’ll understand if their rookie tight end didn’t set the world on fire. McDonald excelled in the chances given, finishing among the top-20 at his position with a +6.9 Production Premium, a +11.6 Target Premium, and 1.75-fantasy points per target. I’m far from a draft capital snob, but McDonald was also drafted in the second round, giving the team a reason to play him to see return on their investment.

The 49ers respective dynasty stocks could not be any lower at this point.  There is a tremendous amount of uncertainty, turnover, and turmoil ahead in San Francisco, which represents a buying opportunity for dynasty owners.  Of all 49ers skill positions he is by far the most stable given his athleticism, pedigree, and draft capital.  The 49ers have virtually no competition among pass catchers.  The tight end depth chart is barren behind Vance McDonald, they don’t have a single pass catching running back, and pass interference extraordinaire/deep threat Torrey Smith is their only credible wide receiver, unless you’re a DeAndre Smelter truther.  This is as cheap as it gets for a young, athletic, starting tight end.  Get in now and buy and hold McDonald.