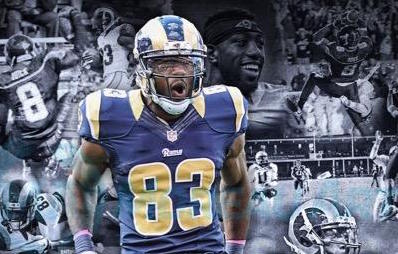 In 2012 Brian Quick was the first pick in the second round of the NFL draft.  Quick is listed at 6-3 and 220 pounds with elite level college production and athleticism per the prospect metrics available on PlayerProfiler.com.  Brian Quick is the type of player that PlayerProfiler.com was designed to highlight and uncover.  If you say you are #TeamBigReceiver, and care about historical comps, then you are obligated to go out and acquire Brian Quick quickly.  At his current 209.8 MFL10 redraft ADP, Quick is the ultimate fantasy football buy-low opportunity.

While at Appalachian State, Brian Quick posted a College Dominator Rating of 48.4 (93rd percentile).  At the NFL Scouting Combine, Brian Quick posted a 105.5 (82nd percentile) Height-adjusted Speed Score (HaSS).  HaSS is a measure of a player’s speed that incorporates a premium on both body weight and body length.  For Quick, his combination of dominant metrics and production puts him into some pretty elite company.  However, like most small school receivers, Quick was not NFL-ready upon entering the league.  Quick’s development curve, as well as a career-threatening shoulder injury, throttled his ascent.

Using PlayerProfiler‘s new Data Analysis Tool, Brian Quick is in elite company among the size-speed specimens in recent NFL history.  The chart below shows NFL wide receivers who stand taller than 6-0, and weigh more than 215-pounds.  These players also have a HaSS above 105.0 (approximately 80th-percentile) and a College Dominator of at least 35-percent (approximately 50th-percentile).  The comparables are striking.  Quick falls into a select group that includes Calvin Johnson, Julio Jones, and Larry Fitzgerald.   And this guy just signed a 1 year “prove it” deal for $1.5 million guaranteed with the Rams?!?  Brian Quick‘s contract may prove to be the biggest steal of free agency in 2016.  We’re just squinting through the fog waiting for the real Quick to finally rise from the mist.

Football is a gladiator spectacle where you either eat or be eaten.  When we think of the great gladiators of our time at the wide receiver position, who do we think of?  Larry Fitzgerald.  Brandon Marshall.  Allen Robinson.  Those are the players to whom Brian Quick most closely compare.  He looks a lot like an alpha dog who knows how to play football.

Brian Quick has demonstrated alpha dog dominance on an NFL field when provide the opportunity.  In 2014, as the Rams true No. 1 receiver, Quick posted 375-yards, three touchdown, 15.0-yard per reception, and a 64.1-percent catch rate before a torn labrum injury ended his season.

At just 26-years old, this might be a make or break year for Brian Quick.  He is the cheapest elite-level prospect in fantasy football and he can be acquired at a nominal amount.  If you claim to be a member of #TeamBigWR and care about historical comps when compiling a fantasy roster, then Brian Quick must be on your fantasy football team in 2016.

If you want to maintain your WR height snob street cred, then you are obligated to acquire Quick across all fantasy formats.