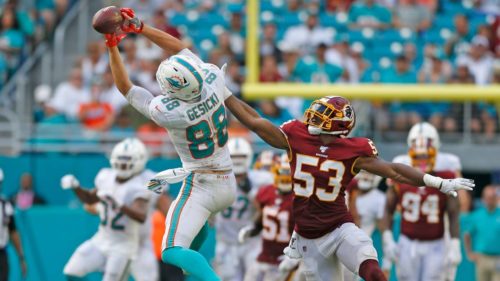 Week 10 was a chalky one with Jaylen Samuels more than returning value and Christian McCaffrey causally dropping another 40 points. This week features fewer games but the totals are higher, making them ripe for takes hotter than my passion for the now the defunct airyards.com (rest in peace). What do the advanced metric and stats say about the scorching takes this week? Let’s get to it.

Marquise Brown put up 147 receiving yards in Week 1. That mark is the sixth-most for a receiver in his first game in the NFL’s history. Brown may not top that mark again for some time, but I say he at least hits the century mark Sunday.

Brown has been injured twice this year. He was recovering from a foot injury heading into Week 1 and played on 15.3-percent of Baltimore’s snaps. In Week 5, he suffered an ankle sprain that sidelined him for part of that game and the ensuing two matches. He returned last week to pay 53.1-percent of the team’s snaps.

In the three games that he’s been the healthiest (Weeks 2-4), Baltimore has made it clear that they intend to use him as a No. 1 receiver. He averaged 9.3 targets and 31 routes over that span. Now he’s going into his second week back from that ankle injury and is unlikely to be limited in any capacity. He is also top-30 in the NFL with a 13.4 Average Target Distance, making his plentiful chances even more valuable.

Finally, he draws the best matchup a receiver can ask for this year: the Bengals. Cincinnati is 32nd in the league in yards per attempt allowed at 8.3, which is 0.3  behind the next closest team. Brown is set up to win a lot of tournaments in Week 10.

The important distinction with this take is that it’s Alvin Kamara, not Michael Thomas, that pairs with Drew Brees. Thomas is a great play this week, but he’s had a bit of a ceiling problem this year. He has scored at least 15 points in every game but has gone over 25 just twice. Julian Edelman and Marvin Jones have as many 25-point games.  Thomas is also probably going to be higher-owned than Kamara, making the latter a good pivot option.

Kamara has been disappointing for fantasy players this season, but that’s not for a lack of trying. He’s sixth in the NFL at 18.8 Weighted Opportunities per game but has scored fewer than 17 points in three straight. Now he goes from having Teddy Bridgewater under center to Drew Brees. The switch at quarterback, paired with natural regression for a player who has a history of lights-out efficiency, makes him a buy.

This week, Kamara and the Saints face the Falcons at home. They are 13-point favorites in a game with a 51-point total. That gives them the highest implied team total (32) on the main slate by over four points.

When efficient players are seeing volume and not producing, we buy and keep buying until they rebound. With Vegas backing the Saints as the best offense this Sunday, Kamara fits that bill more than any other player on the slate.

Mike Gesicki is a Top-3 Value at Tight End

On DraftKings, Mike Gesicki costs just $3,100. He’s been targeted 20 times in the past four weeks and is being used as a deep threat, which is a rare way for a tight end to be utilized. He has five (No. 5 among qualified tight ends) deep targets on the season and a 9.1 (No. 10) Average Target Distance. He’s hit at least 40 yards in three of his last four outings.

Now the Dolphins are going to be without Preston Williams, who tore his ACL in Week 9. He leaves behind a 21.4-percent (No. 35) Target Share and 893 (No. 8) yards 0f Total Target Distance. The volume has been there for Gesicki all season, and now he’s in a spot for it pick up even more with Williams done for the year.

Gesicki is capable of dominating receiver-style routes from the tight end position based on his athleticism. He’s in the 96th-percentile or above in every athletic metric on PlayerProfiler. The Dolphins, as always, will be in a spot where they have to throw to stay in the game. They are 10-point underdogs to the Colts this week.

Gesicki is going to be one of the most used tight ends this week and he’s possibly the best athlete on the field at any given time. Get ready for this week’s Noah Fant in Gesicki.