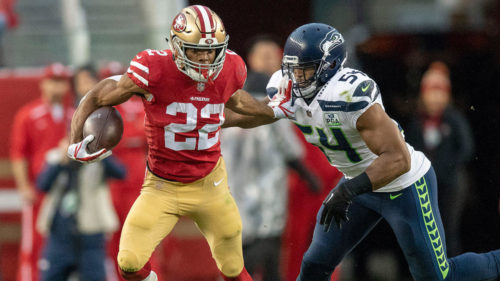 On last weeks main slate, the 2018 strategy held true. While many high-priced receivers busted, stud running backs like Dalvin Cook and Christian McCaffrey paid off. Getting up to those superstar backs requires cheap options that smash value. Identifying these “lineup makers” is paramount to cashing in DFS on FanDuel. Based on advanced stats and metrics, here are some undervalued lineup makers at each position.

The Nick Foles era didn’t last long in Jacksonville, as the 2019 free agent signing broke his collarbone in the first quarter of Week 1. Rookie QB Gardner Minshew was air dropped into the game against a prolific Chiefs team and he did not disappoint.

Minshew completed 88 percent of his pass attempts for 275 yards and two scores. His ball placement was on point, as his Accuracy Rating of 11.5 ranked No. 1 among QBs. His offensive line deserves plenty of credit, as they didn’t allow a single sack. That allowed him to complete 90.9 percent of his passes from a clean pocket. That should continue into Week 2, as the Texans pass rush only got to Drew Brees once last week.

Minshew is only $400 above the stone-minimum QB price, making him a locked-in lineup maker in a game with shootout potential.

As starting RB Joe Mixon came away from Sunday’s tilt with an ankle injury, Giovani Bernard stepped into his role as the bell cow. Mixon’s status is still a question mark, as the team will not want to risk his health so early in the season. This will give Bernard the chance to earn his recent $10 million contract extension. The 49ers allowed Ronald Jones to rip off 5.8 yards per carry, so Bernard and his pass-catching background (91st-percentile College Target Share) should smash.

The same situation is in the opposite backfield of this matchup, as Tevin Coleman exited Week 1 early with a high ankle sprain. This thrusts Matt Breida into the limelight, somewhere that he thrived last season with seven top-25 finishes in his 14 games.

Breida’s efficiency was dreadful last week, as he faced a stacked box on over 50 percent of his carries. As Jimmy Garoppolo and Kyle Shanahan open up the playbook, Breida should see fewer defenders in the box moving forward. Lighter boxes will allow him to convert his 127.7 (89th-percentile) SPARQ-x score into splash plays out of the backfield.

Turns out Derrius Guice was not ready and the Washington medical staff continues to fail their players. Adrian Peterson returns as the starting grinder, but this team won’t be winning enough to deploy him properly. Enter: A supposedly healthy Chris Thompson.

Thompson saw 10 targets last week, currently good for No. 2 among RBs. Dallas now deploys an innovative offensive system that can score quickly and efficiently, meaning a team like Washington will be facing negative game script for most of the game. Jay Gruden basically dumped on Peterson, saying he’s only good for I-formation runs up the middle. Without Guice, Thompson is the only reliable option out of the backfield.

As the clear No. 1 option in Oakland, Tyrell Williams delivered. The Gazelle topped 100 receiving yards and scored on a red zone reception against a stingy Vic Fangio-coached Broncos defense. He was also deployed in the slot on 28 percent of his snaps, meaning the team is clearly trying to put him in advantageous positions to produce.

Williams now has a matchup with the fruitful Chiefs defense that allowed the fourth-most fantasy points to receivers in Week 1. He is a strong play at an incredibly cheap price. A Raiders stack would allow you to jam in high-priced running backs while raising the floor of your fantasy lineup.

Dede Westbrook was the chalk last week and he bailed DFSers out with a late touchdown. Given his QB situation, it’s hard to blame him for not having an immediate connection with Minshew, but that should change this week.

The Texans released slot CB Aaron Colvin after his brutal showing against the Saints. Bill O’Brien stated that rookie CB Lonnie Johnson would likely take the slot role. This will be a key matchup for the Jags, as the team will want Minshew to get the ball out of his hands quickly. Targeting the rookie slot corner making his first NFL start sounds like a good plan. Expect more volume from Westbrook in this matchup.

With both Hunter Henry and Mike Williams likely out this week against the Lions, expect huge target shares for Keenan Allen and Austin Ekeler. But unless they’re both commanding 50 percent of Philip Rivers’ looks, the rest of the targets are getting funneled to Travis Benjamin. The 29-year-old receiver is nearly min-price, meaning he could reach value with just a few targets. Benjamin also ran a 4.36 40-yard dash, so he’s capable of taking any of those few targets deep.

The absolute chalk at tight end will be Darren Waller. He looked like a stud in his Monday night matchup, playing 100 percent of snaps and reeling in seven of his eight targets for 70 yards. Waller has a great chance to smash value playing against the Chiefs at home in a game with a 52.5-point total.