Week 2 left us a graveyard of quarterbacks and a lot of questions surrounding their weapons. While this may seem to complicate the Week 3 slate, it also opens the door for some scoring takes. Which ones do the advanced metrics and analytics back?

Kyle Allen is a Top-3 Value at QB

For this eyebrow burner, we’ll use DraftKings pricing on a point per dollar basis to determine “value.” All signs are against Newton playing in Week 3 as he’s been spotted in a walking boot all week and has yet to practice. If he can’t suit up, Kyle Allen will get the start.

Allen was an above-average passer in college based on his 65th-percentile college QBR but his seven yards per attempt places in the 15th-percentile. It is impressive that he was putting up those mixed results as an 18-year-old freshman at a Power 5 school (Texas A&M). Allen has the profile of a fringe-starter at the professional level and that’s all he needs to be.

This week he faces the Arizona Cardinals in a game that may feature more total plays than any other on the slate. The Cardinals and Panthers are tied at fourth for plays per game with 68 apiece.  Arizona is passing the ball on exactly three-quarters of their snaps while Carolina is still top-10 at 68.3% of their plays happening through the air.

With or without Newton, this game will have fireworks. DraftKings didn’t know of the Newton injury before pricing was released so Allen didn’t have his price adjusted at all. He was left at $4,000 flat. Pay down for Allen and then play all of the studs this week.

The Chargers Produce Top-Five Players at Receiver and Running Back

Producing elite fantasy performances at multiple positions is difficult for an offense, especially one that isn’t playing in a game with a ludicrous total. The Chargers are hosting the Houston Texans this week. Their matchup features a 48-point total. This is good but not mind-bending. However, their offense was run entirely through Keenan Allen and Austin Ekeler last week.

Allen has taken his game to the next level and the absence of Hunter Henry has only further that progress. Allen is getting the same target volume he always has but in through two games, he’s being used farther downfield than ever before. His average depth of target is up to 13.4 which would be a career-high. Despite pushing his boundaries, Allen is as efficient as ever. 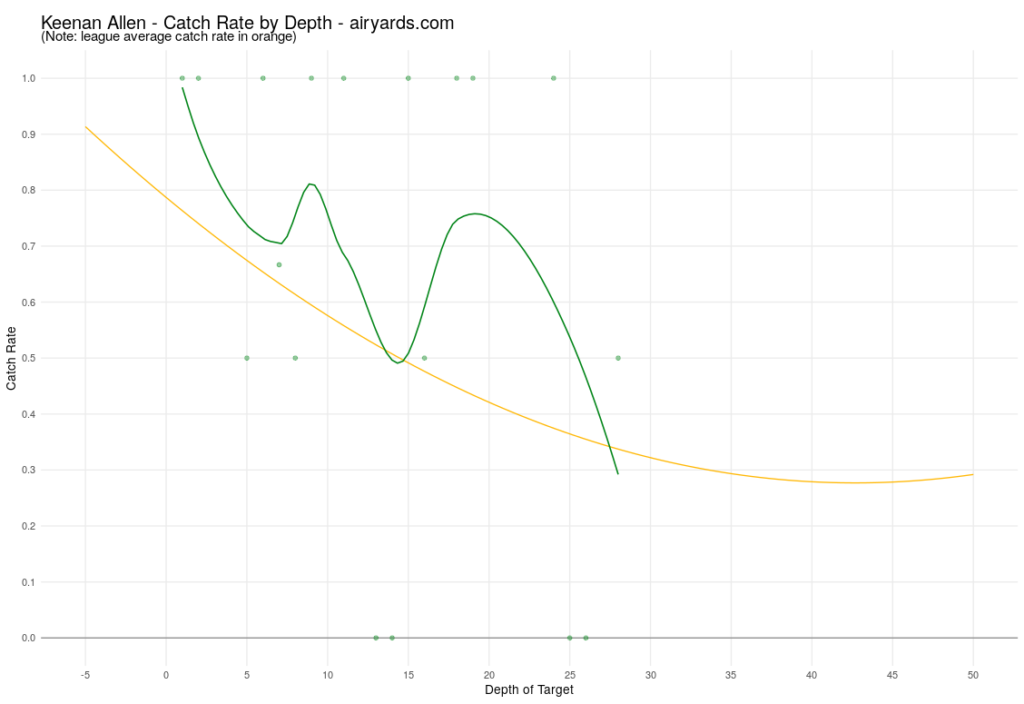 Ekeler is stepping up as well. He is third among backs in Weighted Opportunities (which factors in the value of receptions relative to carries) with 18.9 per game. He leads all backs with 31.4 fantasy points per game. The mind-blowing addition to this is that he’s actually down 3.6 points compared to the expected points he should have. There is more room for Ekeler to get better.

Few teams are as concentrated as the Chargers while maintaining a decent offense (looking at you New York Giants). The sky is the limit for these two halves of the offense.

We’ll label as a top-24 performance for record-keeping purposes. Miles Sanders saw one fewer touch in Week 2 than he did in Week 1 but he more than made up for it with an additional two receptions. This likely correlates with the Eagles losing DeSean Jackson, Alshon Jeffery, and Dallas Goedert throughout the game. None of the receiving options returned to their match with the Falcons. Jackson has already been ruled out and Jeffery’s chances of playing look slim. Even if he does, it’s unlikely he’s near full strength.

Finally, the Eagles are 6.5-point favorites at home. The game-script sets up well for them to run the ball often as the sit on a lead. Combine this boon in volume with Sanders 76th-percentile athleticism and you have a recipe for a fantasy breakout.