If you live on the non-planet Pluto and haven’t heard yet, Arian Foster tore his groin in practice and he was probably going to get injured this season anyway (SportsInjuryPredictor.com considered him a high-risky player with over an 80-percent chance of getting injured).

Jonathan Grimes has been grinding out an NFL career without significant recognition since he went undrafted out of William & Mary in 2012. In college, he accumulated his best statistical season as a senior, rushing for 1400 yards on 288 carries, and added 23 receptions for 262 yards, and 14 total touchdowns. Over his entire career at William & Mary he accumulated 4541 rushing yards, 34 touchdowns, 136 receptions, 1125 receiving yards, and 7 more receiving touchdowns.

Brian Tesch found that school size can inflate some prospect-related metrics, but even a mildly diluted version of Jonathan Grimes would qualify as a truly precocious prospect. On his PlayerProfiler page, it can’t be missed that his closest comparable is LeSean McCoy. Yes, McCoy is creepy but he’s also been an extraordinary rusher and receiver. Grimes isn’t small, standing at 5-10 and 208 pounds. Grimes is on the younger side, 25 years old. He put up 23 bench reps and his agility score in the 92nd percentile highlights his athleticism. If his college resume didn’t already key you in, his agility score suggests he can excel as a receiver and at gaining yards before contact, which may be just as important as yards after contact (thank Shawn Siegele for creating Agility Score and Vision Yards).

According to Matthew Freedman, Jonathan Grimes senior year nQBDR (“precursor to Workhorse, which will probably be similar”) was 80.45 (“very solid”) and had a tantalizing market share as a receiver. Grimes’ 51-percent dominator rating was good enough to rank in the 97th-percentile, supports Matthews’ findings. We know that receiving backs, especially for those in a timeshare, are an important factor when taking the antifragile approach to drafting your fantasy team. I don’t think anyone is really expecting a Brian Hoyer–Ryan Mallett led Houston team to be a scoring machine. Houston will probably be trailing a lot unless their defense keeps them in games (never doubt Watt). Check downs to the running back are coming.

Grimes is not the only backup in Houston. Enter Chris Polk. Polk might be worth your consideration for Zero RB. Like Grimes, Polk is compact at 5-10 and 222 pounds. As a young starter in college he had an 89.90 Workhorse Score and a college dominator rating in the 64th percentile. He was a WR in high school before converting to running back so his receiving ability is a given. In college, he had 78 receptions for 683 yards and four touchdowns (not counting his first season in 2008 where he only had one reception and 20 rushing attempts). Not quite as prolific as a receiver as Grimes but not terrible.

The biggest thing Chris Polk has going for him is that he’s not Alfred Blue.

Enter the underwhelming enigma, Alfred Blue. While playing behind Jeremy Hill at LSU, Blue managed to carve out a nonexistent role in LSU’s backfield. His College Dominator Rating was a curiously minuscule: 8.0-percent (1st percentile), and his best Workhorse Score was 17.99 – abysmal. Alfred Blue’s anemic athleticism and lackluster college production combined to form one of the least impressive RB prospect profiles in the history of the NFL Draft.

Where are these guys getting drafted? Blue and Polk are gaining traction while the more athletic and historically productive and efficient Jonathan Grimes remains devoid of consideration. 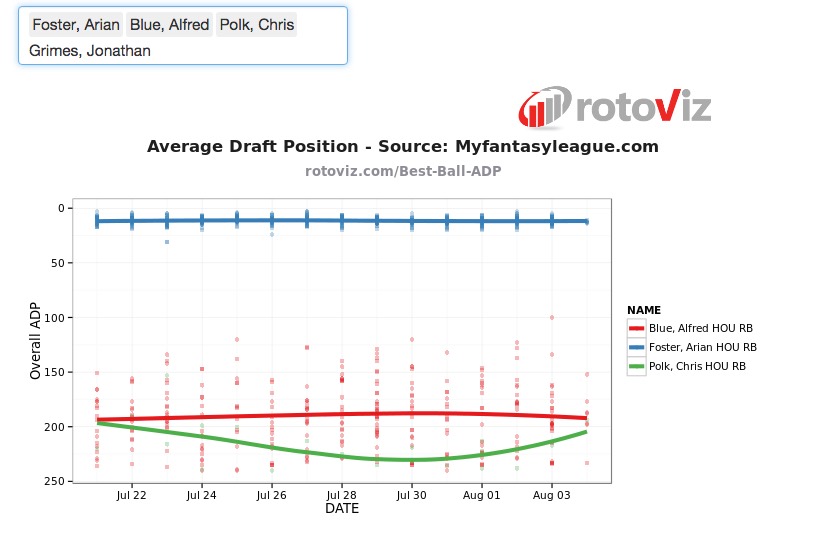 Jonathan Grimes isn’t even one of the out-of-focus guys in the band (this will likely change after a couple preseason games). Indeed, Grimes doesn’t even own his own line on the ADP graph, because the football collective decided that only Alfred Blue and Chris Polk are relevant adds even though Grimes is the only back of the three with an RB1 week on his resume (week 17, 2013) — details.

Understand wanting to add depth, but I’d see what Blue and Polk can do first. #Texans — Matt Miller (@nfldraftscout) August 5, 2015

@tpmaltbie Chris Polk has never had a better opportunity to make a name for himself.

PHL really liked Chris Polk for a bit. Kept him on ’14 roster even though he was hurt all preseason. Gave him goal-line ahead of McCoy late.

The mainstream fantasy analysis echo chamber notwithstanding, Jonathan Grimes is a worthy considering at the end of every draft in every format. Given Arian Foster’s age and injury chronology, Grimes is a particularly worthy add in dynasty leagues.

I know that you know that I know that no one cares about my fantasy teams, but allow me this singular indulgence. In a 16-team dynasty league where we start two running backs and my depth is thin, I traded Rod Streater and Kerwynn Williams for Jonathan Grimes and Chris Polk…. in early April. GET. ON. MY. LEVEL.