The Ascent of Bishop Sankey: A Marcus Mariota Production 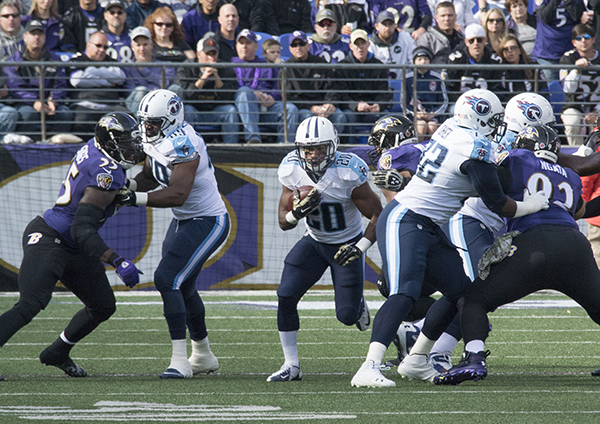 Bishop Sankey had a lackluster first year in the NFL. He struggled to find playing time over Shonn Greene, averaged below four yards per carry and only found the end zone twice. All of these factors have pushed his ADP down to the ninth round. Luckily, for Sankey and for fantasy owners, a new quarterback is in town. And he means business.

Marcus Mariota is the next evolution of the quarterback-athlete, and his SPARQx alone indicates a sublime combination of size, speed, burst, and agility. Mariota’s closest comparison on PlayerProfiler.com is Colin Kaepernick, the QB who took the 49ers from 8th to 4th. He’ll need time to develop in the league, as most rookie QB’s do, but his impact on the running game will be immediate.

If Mariota can merely emulate his mobile predecessors at the quarterback position, the Titans’ rushing productivity should rise significantly in 2015. Ever since Cam Newton brought the read option back into style when he was drafted in 2011, mobile quarterbacks have been changing NFL offenses. The four teams with prominent read option quarterbacks (Redskins, 49ers, Seahawks and Panthers) went through a drastic change in their production on the ground the first year they started mobile QB’s.

The increased rushing yards generated by the mobile quarterbacks themselves do not account for such a staggering differential. Even understanding that randomness can positively skew a single-season samples, the extraordinary year-over-year change provides evidence that a viable read option quarterbacks in the backfield does enhances overall team rushing production. The correlation between running quarterbacks and improved rushing statistics doesn’t stop at overall rush offense either. In fact, throughout recent history, running backs have thrived upon the arrival of a new mobile quarterback.

That’s an average increase of .73 yards per carry when a running QB is introduced. Most running backs average a 0.4 YPC swing (up or down) every year over the course of their careers. Adding speed at the QB position almost doubles that oscillation in a positive direction. Moreover, most running backs not only out-perform their averages during the first season that newly minted mobile quarterbacks are given the keys to the offense, these RB’s often enjoy career highs in yards per carry.

Set Up for Failure

Bishop Sankey wasn’t set up to succeed last year. His 3.7 YPC ranked 24th out of 32 running backs with over 150 carries. He only had ten or more carries in eight games, and seven of those games were against top 13 run defenses. Shonn Greene had over ten carries in five games, and only one of those games was against a top 13 run defense. Thus explaining Green’s 4.2 YPC last year. The Titans had a young group of offensive linemen, who had talent, but little chemistry. A combination of injuries derailed their progress, and they ended up as the 28th ranked O-line according to pro football focus.

Head Coach Ken Whisenhunt has a track record of not playing rookies. In 2009 his 1st round pick Beanie Wells split carries with Tim Hightower. In 2012 he drafted Michael Floyd in the first round, but Floyd only started three games. It wasn’t surprising when Sankey had a hard time seeing the field last year, and it won’t be surprising when David Cobb suffers the same fate in 2015.

Turns out, Bishop Sankey is one of the most athletic running backs in the NFL. An agility score in the 96th percentile, a SPARQ score in the 97th and a comparison to combine superstar Jerick McKinnon make him a valuable asset for the Titans. That will all show up on the field this year when Sankey has the opportunity to produce. He’s worked on his pass protection, an integral part of being in the game around a rookie QB. His 75% catch rate shows that he has good hands out of the backfield, allowing for easy check downs. Everything is in place for a big year for Sankey.

Bishop Sankey was a productive, athletic college running back who was taken first in his draft class. Given the arrival of Marcus Mariota, the expected boost in YPC and an increase in touches he will overcome his 1st year doldrums and prove to be an effective NFL running back this year.

And snagging a RB2 in the 9th round is what winning looks like.

Christopher Gerrish is a mechanical engineering student living in Los Angeles. Follow him @gerrishbrosff. Check out the YouTube Channel he shares with his brother, Gerrish Brothers Fantasy Football for football related nonsense.