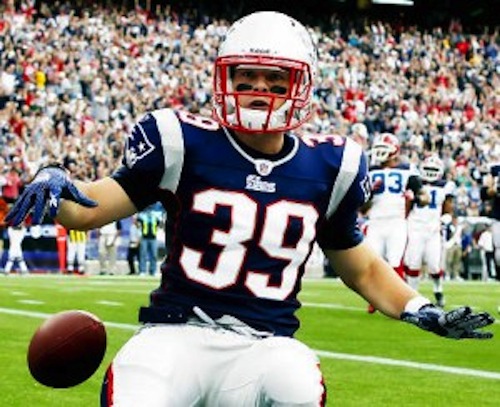 Let’s just get this out of the way right from the start so y’all know where I’m coming from. I’m a tape grinder who crushes hundreds of hours of film every week in the pursuit of unlocking just what makes NFL players tick. Sometimes if I really keep my eyes peeled I’m able to look into a player’s soul during one beautiful split second while they are moving on the field. In these moments I can understand their total essence as both a football player, and more importantly, as a human being. Needless to say, I have very little use for statistics and advanced metrics.

Regardless, I’ve been lurking on PlayerProfiler and listening to RotoUnderworld Radio for a few months now after hearing Evan Silva plug the site, trying to better understand this burgeoning, cult-like community of stat heads. Normally I’d just continue to lay low, grind tape, and text my good friend Greg Cosell, but I recently felt compelled to speak up and question some of the flimsy analytical analysis going on around these parts so this site’s brainwashed “minions” could have their eyes opened.

That’s why today I’m going to point out some of the glaring holes I’ve noticed on PlayerProfiler, specifically with its “Best Comparable Player” feature. I’ve spent hours on this site trying to figure out things like just what exactly ‘Breakout Age’ means — I think it is when a player gets their first zit? If true, poor Amari Cooper (his 18.2 Breakout Age is in the 99th percentile). If there is one thing I do understand, it is when a player reminds me of another player. And it ain’t complicated folks. It’s just something you feel in your gut. That is why I am particularly offended by many of the site’s player comparisons, which get things wrong time and time again. Whatever wonky, over-fitted, analytics-based special sauce (whoa, surprised myself with those words) they are using to spit out these comps is clearly not working.

As far as I’m concerned, there are only a few things you need to compare one player to another: a set of eyes, a TV/DVR combo, a strong moral compass, 90-plus years of experience studying this beautiful game, and access to game tape on every single snap of pee wee, high school, college and NFL-level football that the player has ever played. I’m blessed to possess all of these.

Anyway, here are just a few of the many egregious comparisons I’ve come across:

C’mon. Are you kidding me? This is the kind of stuff that really ticks me off and first alerted me to many of the ludicrous comparisons on PlayerProfiler. Jordan Todman is so clearly a glory boy who got a liberal east coast education at UConn while Danny Woodhead lived off the land in God’s country at Chadron State in Nebraska. For lack of a better phrase, it’s pretty black and white.

Better Comparison: Zach Zenner, who took multiple agricultural classes (I’m guessing) at North Dakota State. (By the way, interesting there isn’t a photo of Zenner on the site yet. Probably because the striking scrappy resemblance to Danny Woodhead would be too much for the “algorithm” to deny).

Only one comparable player for DeSean? Absurd. There have been hundreds of DeSean Jackson’s who have entered the league in the past few years and deserve this obvious comp over Brandin Cooks. If a player is around 5-10 and is drafted to play in the NFL, they are comparable to DeSean. Don’t over-think this.

The football gods put Justin Forsett one on a tee for you and you struck out. Hello! Short guy in the Chargers backfield wearing number 43…ring a bell? Mcfly? Anybody home?

Despite my criticisms, I have to applaud PlayerProfiler, which on the whole is a very comprehensive database…except for just one oversight: a glaring omittance of one Jimmy Richard Clausen. Not sure if this is intentional or an accident, but either way just wait until Week 3 when a frustrated Jay Cutler leaves the huddle, lights up a cigarette, and walks off the field for good. The amount of football fans rushing to PlayerProfiler to size up Jimmy Clausen will have the servers pining for the days when those Turkish hackers mercifully took the site offline for a few days. And yet the masses will have nothing to see because there isn’t a profile for the pride of Oaks Christian High School.

Riiiiiiiight. This makes a lot of sense (it doesn’t). Be sure to let me know when Calvin goes on TV to spit in Detroit’s face, announce he’s leaving the Lions to team up with Aaron Rodgers, Jordy Nelson, Randall Cobb, Davante Adams, Ty Montgomery, Jarrett Boykin, and Jared Abbrederis (sorry, didn’t want to forget anyone) in Green Bay, wins a few championships, returns home to Detroit only to have the entire team get injured, and then drags a crew of replacement-level players and Zach Zenner (playing the role of Matthew Dellavedova; see even cross-sport player comps are easy) to the the NFC Championship game where they lose to an ascending Minnesota Vikings squad (the NFL’s Golden State Warriors). When that happens, yeah, maybe we can compare him to LeBron James.

Better Comparison: Calvin Johnson is a generational athlete who totally transcends regular player comps. It would be insulting to compare him to another WR. He kind of reminds me of a Transformer, honestly. Thundercracker. Look it up.

This is when I knew PlayerProfiler’s player comps had completely jumped the shark and should not be taken remotely seriously. Is this an avant garde comedy art project or an advanced metrics database for NFL players? But whatever, I’ll bite because I’ve grinded hundreds of episodes of The Smurfs. If Gargamel and Kelvin Benjamin were even remotely comparable they would have the same birthday (October 31). Gargamel, of course, is notorious for hating his birth date. No one ever wishes the poor guy a happy birthday or gives him a present because it’s Halloween. I’ve never heard Kelvin complain about someone not wishing him happy birthday on February 5, so…? Also, Gargamel has corns on his feet not cornrows on his head like Kelvin.

Until RotoUnderworld makes these changes, I will abstain from using the site… unless I have a draft coming up or want to make a waiver wire claim or need to evaluate a trade offer.

Peter Overzet (@peteroverzet) is one of the co-hosts of The Fantasy Football Comedy Hour podcast (@TheFFComedyHr). He has never watched tape and is actually a card-carrying, Janis-loving, Rotounderworld minion.