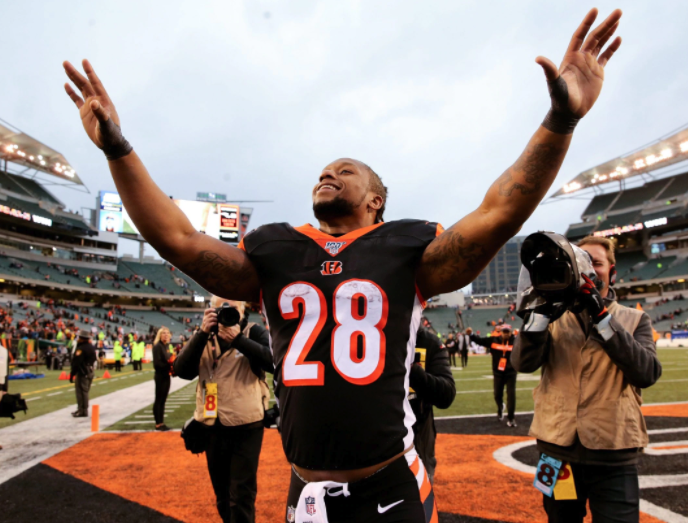 There are many factors to consider when entering drafts rooms. League scoring, roster size, hometown player premiums, positional runs, beer runs, beer consumption, fulfillment of a lost bet from last season, etc, etc. While all are important to consider, what everyone wants to know is which draft strategy is optimal and how to avoid the busts. One strategy that fantasy footballers should give minimal consideration to is Zero RB.

Don’t make this game harder than it needs to be. While certain circumstances can make it necessary and there will be instances where it does hit big, Zero RB drafting is not optimal in today’s NFL. This strategy severely limits the odds of winning a league. The goal is to find a strategy that creates the best chances for upside while also being averse to risk. Accomplish this by hammering robust running backs early and often while using the middle rounds to find receivers.

There’s an influx of young running back talent entering the league at the same time offenses are shifting pass-heavy. It’s easy to read that last part and ask why we shouldn’t draft wide receiver early and often. This misses the point that the supply of viable pass catchers is opening up even wider as teams spread the ball around. While up-and-coming halfbacks are introduced into the pros, the supply of these players remains scarce relative to the rest of the fantasy positions.

Fewer teams are implementing one workhorse back, while more coaches are rolling with committee backfields. This is a trend that has been happening for years now. Coaches call for three-receiver sets at a rate exceeding 60-percent, which has created an inundation of available pass catchers. Still, there are people who wait to hit on a workhorse back via injury while stockpiling receiver early. A completely backwards approach when considering the positional supplies available.

Another trend is the propensity for coaches to call shotgun formations. Teams are lining up in shotgun 63-percent of the time and passing on those plays 77-percent of the time. With heavy penalties for roughing the passer and pass interference, the rules favor the offense in passing situations. Pass plays prove more efficient than run plays in most game scenarios. Warren Sharp’s 2020 Football Preview goes into great detail about the metric EPA, or Expected Points Added. It is helpful in evaluating play-calling efficiency, giving every down and distance value based on what has been called historically from that same scenario.

Last year, teams earned an EPA of 0.02 running a pass play on average compared to -0.05 from a run. In today’s NFL, many teams have turned towards analytics and away from the old anecdotal run-first philosophy. This is why it is so important to lock up that “do-it-all” workhorse back early and often in drafts. A player that doesn’t come off the field and is useful to his team in every game situation is a rare commodity. There is a long list of wide receivers that will see 100-plus targets. Last season, there were 30 such wide receivers in comparison to only 20 backs with 200-plus carries.

The disparity between the alpha WR1 and the complimentary WR2 is closing in. With teams passing more, the supply of targets increases and creates more opportunity for second or third reads. Less carries means running backs that share a backfield are far less valuable than their bellcow RB1 counterparts.

It’s critical to understand the importance of this trend. Ultimately, with the divergence of a second tier running back growing each year, the receiver tiers are almost equalizing. At the same time, the alpha receiver nears extinction. Gone are the days of a Julio Jones dominating their team’s Target Shares. All of a sudden, dynamic receiver duos such as Tyler Lockett and D.K. Metcalf have taken the league by storm.

The ability to lock up a workhorse, “do-it-all” back is fleeting after the first round ends. Drafting a back that never comes off the field and smashes, such as Christian McCaffrey, bestows exponentially higher league-winning odds than the top targeted receiver in a given year.

The argument for avoiding early round backs has always been fragility. Running backs have a higher exposure to injury and therefore bust more often. In theory it seems to make sense, but is this empirically true?

To find out, I revisited and updated a PlayerProfiler Bust Rate Study from 2015. In the study, running backs did hold a 15-percent higher bust rate in comparison to receivers. The main takeaway however, was the fact that backs in Rounds 1-4 held a higher value over replacement. I argue that this remains the same today, although I did find some things changed.

A review of positional Bust Rates between WRs and RBs selected in Rounds 1-12, weighed by ADP over a multi-year sample (2016-2019), further illuminates the benefits of early RB drafting. I first started by gathering average fantasy points scored per game and games played for both the RB and WR positions from PlayerProfiler’s Data Analysis Tool. I pulled this data for the last four years. Then, using Fantasy Football Calculator ADP, data for all players drafted in 12-team PPR leagues was added to the database.

Next, I weighed the points per game by putting a premium on the number of games played per season and discounting ADP. Draft Capital Premium multiplies the point average to create a weight by draft slot. The later players are selected, the more their Draft Capital Multiplier increases, creating a more level expectation based on where they were picked. For example, players selected in the twelfth round received 50% points per game bonus, because late-round players are not expected to put up 300 points.

Finally, we set the Bust Threshold to hover around RB18 or WR18 in Fantasy Points Per Game, the midpoint for running back and wide receiver fantasy relevance, and subtracted it from their Adjusted Fantasy Points Per Game. Last season, Le’Veon Bell finished as the RB18. Selected in the late first round, he achieved RB2 performances in 62.5-percent of his games and had six RB1 performances. This was well short of the ceiling, but it was an intuitive bare minimum floor for a late first-round pick.

Since Matt’s study from 2015, wide receivers have become more fragile than running backs overall and in the early rounds. The delta has changed from 14.9-percent in favor of receivers to nearly even in terms of stability/safety between the positions.

While taking that alpha receiver in the first round may feel like a safe pick, a workhorse back offers more upside with similar risk. With passing offenses deploying more three and four-receiver sets, individual WR target shares are trending down, making it harder to find the target hog receivers. Conversely, the influx of running back talent the last four years has increased the supply of  running backs with league-winning all-purpose skill set, best exemplified by Christian McCaffrey in 2019.

Just as top tier running backs are becoming more prolific, the opportunity cost of drafting team No. 1 receivers is diminishing. A deeper WR talent pool has pushed wide receivers with true alpha profiles from D.J. Chark to DeVante Parker into Rounds 5-8 of fantasy drafts. Receivers have proved to be 11.34-percent safer in these rounds, even with 20 more players in the sample. This validates our earlier point, highlighting the importance of selecting stud backs early. Avoid the 60-percent bust rate of backs in those middle rounds and instead draft the highly targeted, less hyped receivers.

Smart fantasy managers are more frequently drafting running backs into the early rounds. An even 11 running backs and 11 wide receivers were being drafted in the first round between 2016 and 2017. Those numbers have shifted dramatically since Todd Gurley and McCaffrey started leading a large percentage of fantasy teams to championships. First round running backs out-numbed first round wide receivers nearly 2:1 (15 to 7) in 2018 & 2019.

We have come a long way from that strange 2015 season, when late-round RB Devonta Freeman led all running backs in fantasy points. Since then, maximizing the probability of hitting on a stud running back in the early rounds has been most successful on draft day. This summer, the myriad of dynamic bell cow backs available in the early rounds is eclipsed only by the treasure trove of highly productive receivers available in the middle rounds. Draft accordingly.