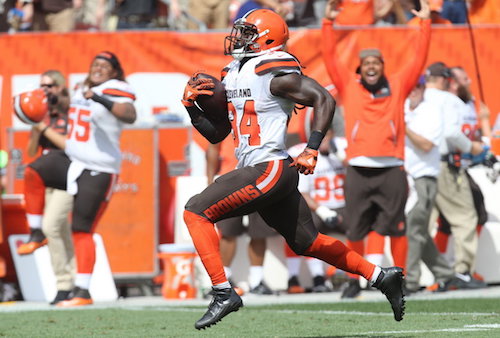 Few NFL players have been featured in more fantasy football sleeper posts than Duke Johnson. Most Duke Johnson tout pieces reference Johnson’s terrific production at Miami, encapsulated by a 33-percent College Dominator Rating in his final season and his school record holding career rushing yards. Johnson was both prolific and efficient with the Hurricanes evidenced by 6.8 (91st-percentile) yards per carry at a power conference school.  He was also very involved in the passing game at Miami posting a 14.8-percent (93rd-percentile) college target share.

Given Duke Johnson‘s prospect pedigree, how could undrafted back out of Alabama State seize the Browns starting running back role from him?  Firstly, at 5-9, 207-pounds, Johnson’s 30.6 body mass index (BMI) is indicates that he does not have the body mass to absorb every-down collisions with NFL linebackers.   For comparison, Johnson’s BMI is less than that of Giovani Bernard, who annually loses work to the plodder Jeremy Hill.  On the other hand, Isaiah Crowell weighs 224-pounds featuring a 31.2 (74th-percentile) BMI.  By awarding Crowell with the majority of running back touches of the last two seasons, the analytical-driven Cleveland Browns have preserved the health of both backs. Neither Johnson, nor Crowell, has missed an NFL game, playing 64 games in two years. Beyond size, Duke Johnson absolutely looks athletic in space, propelled by a 11.04 (82-percentile) Agility Score, a key satellite back trait. Johnson’s other workout metrics tell a different story. Johnson’s 112.3 (50th-percentile) SPARQ-x Score is lower than Isaiah Crowell‘s 115.5 (59th-percentile) SPARQ-x Score.

Isaiah Crowell is better equipped to be the Browns’ bell cow, and his touches are rising.  Crowell’s Opportunity Share is trending up year to year, going from 49.4-percent to 59.8-percent, while Johnson’s declined from 42.7-percent to 35.4-percent in 2016. This past year, Crowell also received 9 carries inside the 5-yard line, compared to only 1 Duke Johnson, indicating Crowell possesses more touchdown upside. Yet, no number was more impressive than Crowell’s 53 receiving targets, because receptions are a crucial component of fantasy football production. Moreover, Crowell’s 75.5-percent catch rate actually exceeded Johnson’s 71.6-percent catch rate in 2016.

Efficiency still matters.  The Browns RB duo had similar yards per carry in 2016, with Isaiah Crowell posting a 4.8 YPC compared to Johnson’s 4.9 YPC.  However, Duke Johnson’s high yards per carry mark is less impressive, because he faced a light defensive front on 60.8-percent of his carries, compared to only 34.0-percent for Crowell.  While Johnson posted a better drop rate and receiving yards per reception last year, indicate that he is a marginally better receiving option out of the backfield, he managed only 13 more receptions than Crowell on the season.

Of the Cleveland running backs, Isaiah Crowell, not Duke Johnson, is undervalued heading into 2017.  Crowell owns an 84 PPR ADP on Fantasy Football Calculator. Why is Crowell so underrated?

Duke Johnon’s presence and the perception is of a committee in Cleveland undoubtedly throttle Isaiah Crowell‘s industry consensus 2017 projection. Yet, Crowell was the NFL’s most under-the-radar bell cow in 2016, dominating touches inside the 5 and finishing among the top-20 in running back receptions. In an NFL where most teams deploy specialized backfields, a healthy Crowell could conceivably finished in top-10 in RB touches in 2017, especially if his opportunity share continues to rise.  According to Rotoworld, the Browns will likely retain Crowell on a cheap restricted free agent tender, giving him incentive to prove himself and earn a lucrative contract in 2018.

An injury to Cleveland 315-pound left guard, Joel Bitonio also muted Crowell’s second half productivity.  Bitonio is run blocking mauler, and Crowell was averaging 6.46 YPC in the four games to start the year in which Bitonio was healthy.  While four games is a small sample size, it is encouraging that Crowell shredded NFL defenses in conjunction with a healty Joel Bitonio.

Improved quarterback play would also propel Isaiah Crowell 2017 production. Cody Kessler showed flashes during a brief stint, and the Browns are rumored to be interested in trading for Patriot’s Jimmy Garoppolo.

Duke Johnson will always have a role in the passing game, but he simply doesn’t have the breakout potential that some still expect from him.  He has tremendous wiggle and agility in space and good hands, but offers very little else to an NFL team.  Giovani Bernard is a good comparable for Johnson’s skill set. Johnson’s elite satellite back profile will keep him relevant in PPR leagues, but he will never be more than a flex starter in fantasy leagues as long as Isaiah Crowell is healthy. While Duke Johnson is a solid handcuff with standalone PPR value, Crowell is the primary back and better value in all fantasy football formats.

There already is a feature back in Cleveland. He is The Crow, not The Duke.