The word “regression” has been tossed around in the fantasy industry over the years. The best way to define it is “a return to a former state.” In the context of fantasy football, regression generally means that someone under or over-performed and their production will return to what it should have been. This is one of the many ways to spot bounce-back players and potential bust candidates. Some NFL players get lucky in the touchdown department. When they put up ridiculous scoring totals, odds are they are going to see touchdown regression. The opposite also holds true when they score well below expected. Lucky for the fantasy community, PlayerProfiler’s Expected Touchdowns are based on every touch at every yardage marker in every game situation. This allows fantasy gamers to see just how lucky, or unlucky, their stud running backs were in the red zone. Here are some touchdown regression candidates based on their advanced stats, metrics, and analytics player profiles.

Out of all running backs in 2018, no player scored at a more unsustainable rate than Chargers RB Melvin Gordon. Gordon scored 14 total touchdowns despite ranking No. 15 or worse in carries, targets, and even red zone touches. Gordon managed this with long touchdown runs, as evidenced by his top-10 Breakaway Run Rate of 7.4 percent. 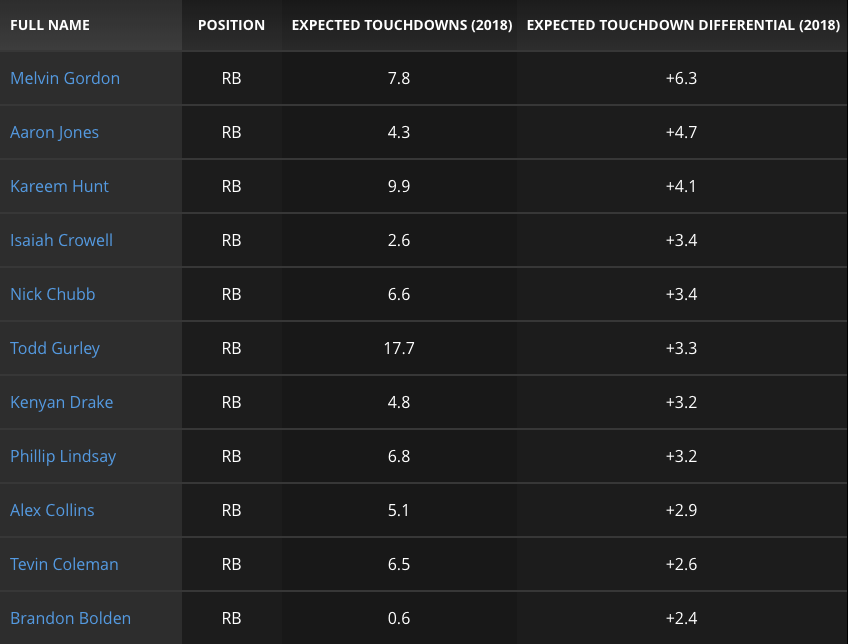 Gordon has hit double-digit touchdowns in three straight seasons now. Fantasy analysts have been predicting touchdown regression for years now and he keeps defying logic. While Gordon seems to be a bankable outlier, unless he sees more touches in high-leverage situations, his scoring will come down.

Rams RB Todd Gurley is a surprising fixture on this list. While he did lead the NFL with 21 touchdowns, he also finished No. 1 in red zone touches and No. 5 in Weighted Opportunities. His 3.3 touchdowns over expectation put into context how ridiculous Los Angeles was from a scoring perspective last season.

This should make Gurley even more avoidable in fantasy drafts. The injury concerns were already dropping his ADP, along with the selection of the hyper-efficient Darrell Henderson. Gurley’s Weighted Opportunities and Expected Touchdowns will plummet in 2019, making him a staple of “Do Not Draft” lists across the industry.

The first name that came to mind when starting this research was Phillip Lindsay. Sure enough, the Broncos RB scored the eighth-most touchdowns above expectation last season. Lindsay’s 10 total touchdowns were an incredible feat considering the Broncos ranked No. 24 in scoring. Because of his 5-7, 184-pound frame, Lindsay only saw five goal line carries, which ranked No. 25 among RBs.

As incredible as Cowboys RB Ezekiel Elliott was in 2018, it still could have been better. Elliott finished No. 6 among RBs with 21.8 PPR points per game, and that was with only nine total touchdowns. With 381 total touches, 51 of which came in the red zone, he should have scored at least 11. 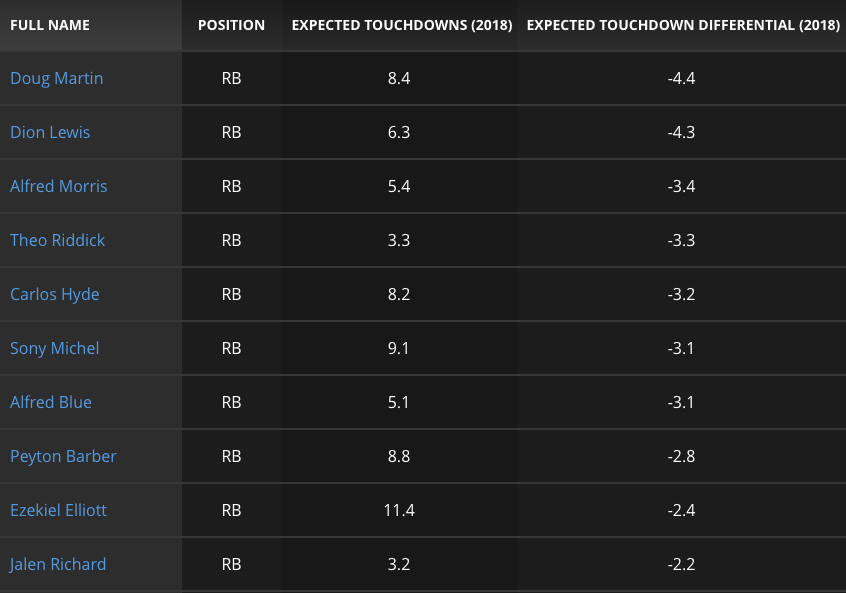 Elliott’s low touchdown total can be explained by his seven goal line carries, which was No. 18 among RBs. If he can put together a season of sustained passing game usage, a normal touchdown rate, and his usual rushing volume, Elliott will post a mind-bending fantasy season for the ages. His combination of floor and ceiling make him one of the best options at No. 1 overall in fantasy leagues.

As the Patriot’s signature “big back”, Sony Michel scored very few touchdowns. That same fruitful role afforded LeGarrette Blount 18 rushing touchdowns in 2016. While Michel managed to finish No. 8 in red zone touches and No. 9 in goal line carries, he only rushed for six scores. That was three below his Expected Touchdown total.

While Michel sounds like a bounce-back candidate, the Patriots are not making very encouraging moves. After selecting Alabama’s Damien Harris in the third round of the NFL Draft, it was revealed that Michel had a knee scope and hasn’t practiced this offseason. Given his lack of passing game work and the possible need for continued knee maintenance, rostering Michel is a risky proposition for 2019.

While most of the running backs in these charts are destined to regress, their opportunity will dictate how much. Players like Aaron Jones and Kenyan Drake will see increased workloads in all areas of the field, and scoring opportunities will expand. Meanwhile, Doug Martin and Dion Lewis will likely be phased out of their respective offenses in favor of more talented players.

The best way to use this information is to tread carefully when dealing with guys like Gordon and Lindsay. Touchdowns are one of the most volatile stats in football. Look for sustainable volume and fade unsustainable efficiency.