How did the Saints start winning while Drew Brees was a fantasy football bust? 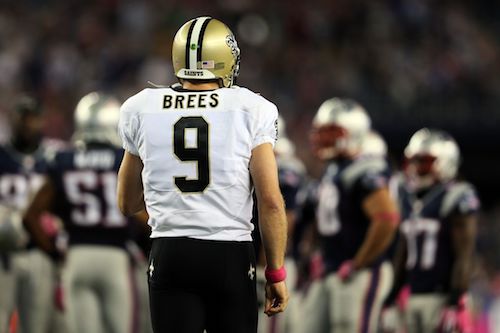 New Orleans won again! The team is rolling! So why all the frowny faces? Those are fantasy football frowns. Saints fans love Drew Brees, but he is not delivering for fantasy footballers this year. Reviewing advanced, stats, metrics, and analytics, how did Brees become a fantasy football bust?

The problem is not Drew Brees, who is a lot like Russell Wilson. Both are compact QBs with big hands who are incredibly accurate downfield throwers. Furthermore, Brees is still in his prime, evidenced by a 58-percent Deep Ball Completion Percentage, which is No. 1 among NFL quarterbacks. The difference is Russell Wilson scores fantasy points on the ground and through the air. Brees must go airborne or bust, and this year he has been a fantasy bust.

Why? His pass volume is way down. What changed? The New Orleans defense has been rejuvenated. As it turns out, Marshon Lattimore and Cameron Jordan are a real problem for Drew Brees fantasy owners.

Brees has been betrayed by Game Script, which measures the average point differential at any point in the game. The Saints’ +5.26 Game Script is No. 3 in the NFL, and it’s driving down their historically high pass-to-run ratio. Positive game script is great for running backs who want carries in the second half, but fantasy quarterbacks crave negative game scripts and garbage time.

While Russell Wilson could rush for touchdowns when Seattle’s defense was at the peak of its powers, Drew Brees now finds himself handing it off over and over and over again in the second half. It’s time to start looking for other fantasy quarterback options.