More than many other factors, draft capital matters for wide receivers. If used in conjunction with Breakout Age, College Dominator Rating and a player’s advanced stats and metrics profile, we can identify which rookies are worth targeting and which are worth avoiding even before the NFL Combine starts. A player’s Breakout Age is the age when they first achieve 20-percent of their respective team’s Target Share. We won’t dwell on CeeDee Lamb and Jerry Jeudy, the two top wide receivers on most draft lists. The most intriguing players pre-Combine are South Carolina’s Bryan Edwards, TCU’s Jalen Reagor and Clemson’s Tee Higgins. One hot name to fade for now is Alabama’s Henry Ruggs. Keep in mind this may all change post-NFL Draft based on draft capital and landing spots. After the Combine, we will have more data points and will continue to refine our process and our draft tiers and overall rankings.

The most exciting part of the 6-3, 215 pound Bryan Edwards‘ prospect profile is his 17.9 (100th-percentile among qualified wide receivers) Breakout Age. This while competing for targets with former second-round pick, and current San Francisco 49ers rookie sensation, Deebo Samuel. In addition, South Carolina’s quarterback play has been a limiting factor.

There were reports from offseason workouts that Edwards has a 40-inch vertical and runs a sub 4.5 forty-yard dash. A solid Combine can ensure Edwards is drafted on or before Day Two. That would make him an upside early-to-mid second round sleeper pick after top running backs are off the board. He won’t be a hot name since his knee wasn’t healthy enough for him to play at the Senior Bowl. More importantly, he was a young senior since he started and played as a freshman at age 17.

Too many people are sleeping on Jalen Reagor after he played on a putrid TCU offense in 2019. A former long jump champion with an 18.7 (95th-percentile) Breakout Age and 36.7-percent (74th-percentile) College Dominator Rating quietly balled out. Market Share and Dominator Rating paint the true picture that his raw numbers from a lackluster 2019 season would conceal. On top of the impressive receiving numbers he recorded in his sophomore season, he also had 13 carries for 170 yards and two touchdowns. He averaged 20.8 yards per punt return in 2019, even returning one for a score. Always look for dynamism in wide receivers. Especially when their respective teams try to get the ball in their hands any way possible. 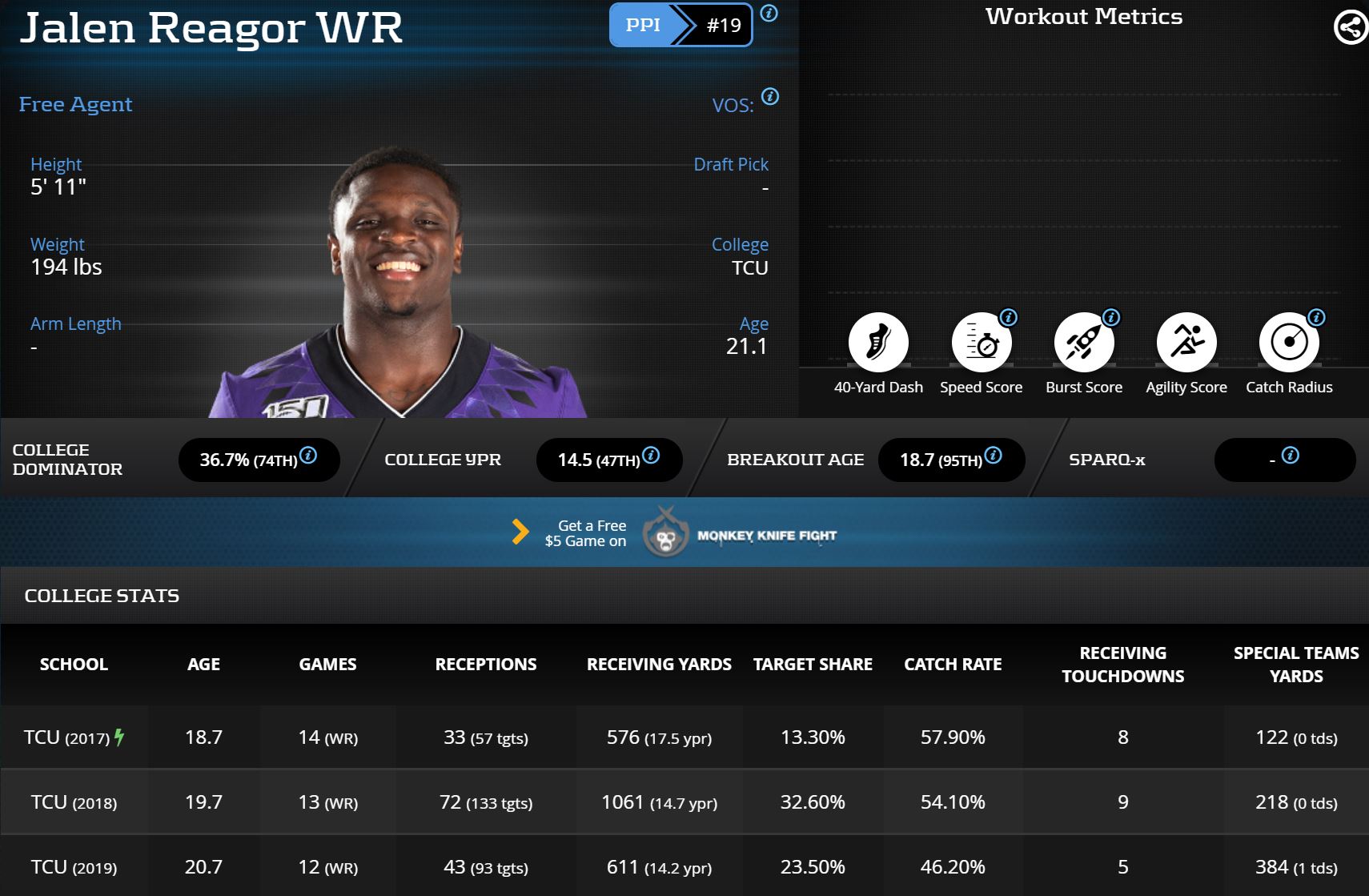 Many dynasty owners will drop Reagor in their rankings due to his lackluster junior year in 2019. They may not realize that freshman quarterback Max Duggan only threw for 2,077 yards and 15 touchdowns in 12 games. We are betting on the ability he continued to flash in 2019 despite the drop in perceived production that will scare off less savvy dynasty owners.

6-4, 200-pound Tee Higgins, who just turned 21 on January 18th, was Clemson’s leading receiver in 2019. He followed an age 18.6 (96th-percentile) breakout freshman season with impressive sophomore and junior campaigns. He commanded a 26.9-percent Market Share in 2019, all while splitting targets with sophomore and future star Justyn Ross. 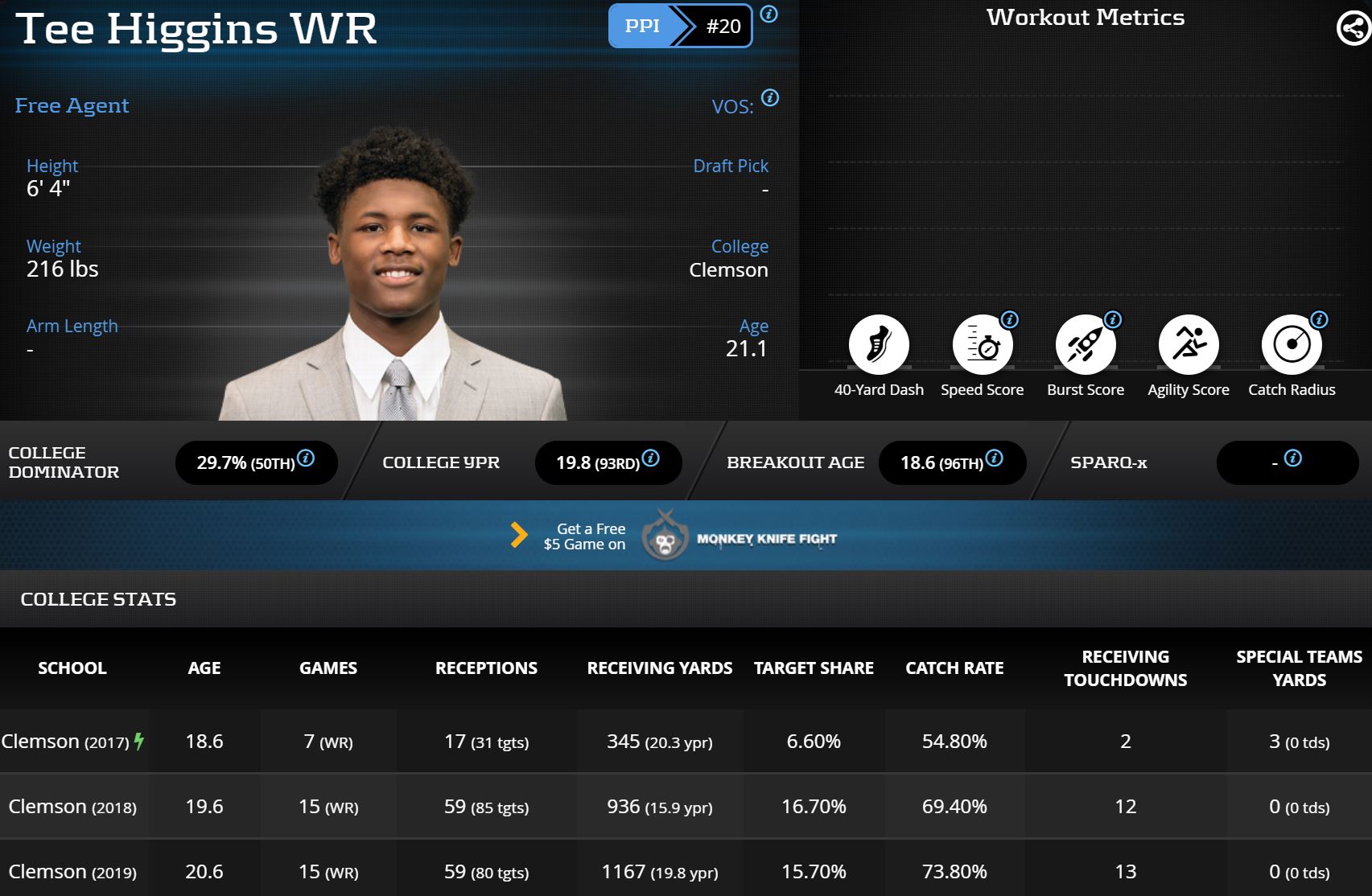 Higgins is just outside the first tier of wide receivers in this rookie class pre-NFL draft. With a solid Combine, he can go from being an early Day Two pick to a potential first-rounder. If that happens, don’t hesitate to use a mid-to-late first round rookie draft pick on him after CeeDee Lamb, Jerry Jeudy and the top running backs are off the board.

An electric player that we should have concerns about is Henry Ruggs. While he has a great highlight reel, he has never garnered more than a 15-percent Target Share in any college season. Sharing a receiving room with Jerry Jeudy and Devonta Smith in 2019 certainly played a role, but he was outproduced by freshman Jaylen Waddle in 2018 too. Ruggs should blow up the Combine and become a hot name heading into dynasty draft season, but we should use the NFL draft as a final litmus test. If he goes in Round 4 or later, that’s too many red flags and we should pass on him in dynasty rookie drafts. 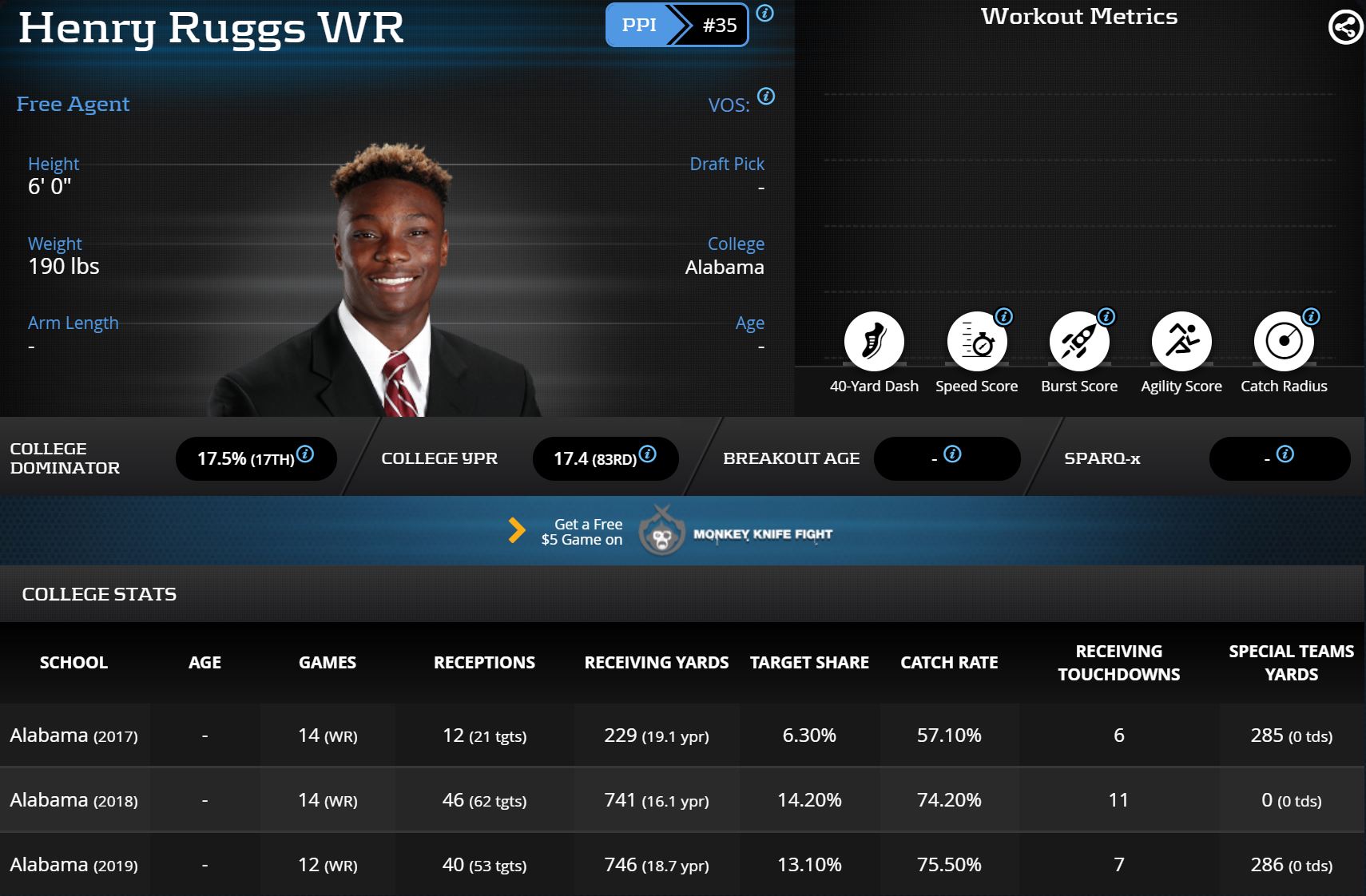 Ruggs turned 21 years old this past January 12th, but the data on wide receivers breaking out after their age-20 season is not pretty. There will always be exceptions, Michael Thomas is one, but this is a sign that we should find someone in our dynasty leagues who will be willing to pay more than us for Ruggs’ services.