Jerry Rice once suggested he developed his great hands by catching bricks from his father on construction jobs.

Allen Lazard did not snag rectangular chunks of burnt clay as a child. But he has done plenty of brick catching from Aaron Rodgers to this point in his professional career. Rodgers has a habit of throwing metaphorical bricks at his receivers in the form of backhanded public commentary and years of sporadic in game usage. Eventually, they catch and stack enough on his wall of trust for him to thrust them into a prominent role. If you don’t have Rodgers’ trust, you won’t last in Green Bay. Just ask Jeff Janis.

The Davante Adams trade rightfully triggered a tsunami of fantasy takes and analysis. Much discussion was centered around Derek Carr and his inability to support Adams at the production-clip we’ve become accustomed to. There was little focus on the fact that Lazard is the heir to the Adams role in the Green Bay offense.

You may ask, “What makes you so sure Lazard will be Green Bay’s No. 1 receiving option in 2022?” The addition of Sammy Watkins and lingering likelihood of another WR add via the draft make this a valid question. The simple answer: history, plus the fact that he fits the GB WR1 prototype. 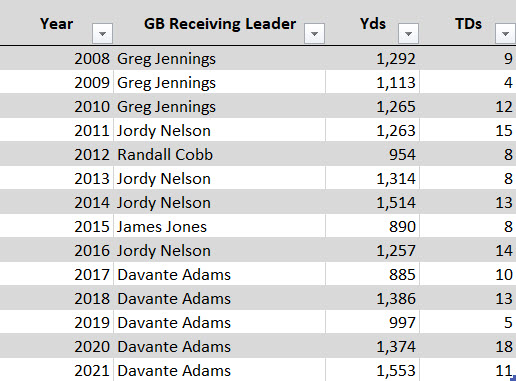 The only exceptions were in 2012 and 2015. In each of those seasons, Nelson missed significant time due to injury, but likely would’ve remained Rodgers’ primary option if healthy. A quick glance at the career production curves for these three players reveals a striking trend: surprisingly low levels of usage early in their careers. Jennings’ story is a bit different because he began his career with Brett Favre at quarterback and was already established when Rodgers took over in 2008. For the sake of drawing parallels to Lazard we’ll put his profile to the side. That leaves us with Nelson and Adams.

Nelson began his career by finishing as the WR88, WR96, and WR79 in Fantasy Points Per Game over his first three seasons. However, in year four he catapulted himself to a WR4 finish.

Adams also stumbled through his transition to the NFL. He finished as the WR76 and WR66 in years one and two of his career before also making a giant leap to WR12 in year three.

As an undrafted player out of college, Lazard was essentially redshirted in his rookie season, catching only one pass for seven yards. Other than that outlier, Lazard’s early career output has been in line with, if not better than the early career production of both Nelson and Adams. In 2021 Lazard posted 40 receptions, 513 yards and 8 TDs — all career highs. His performance over the final five weeks of the season was particularly impressive. In those games, he contributed 290 yards and five TDs but most importantly, Rodgers began looking his way in clutch situations.

Nearly as important as his ability to earn Aaron Rodgers‘ trust, are Allen Lazard‘s physical traits and skill set. Lazard is a 6-3, 225-pound specimen with above average athleticism, in his prime. His frame compares favorably to both Jordy Nelson, who was 6-3, 217-pounds as a prospect, and Davante Adams, who checked in at 6-1, 212-pounds. He has a true “alpha-X” body-type.

The biggest blemish in Lazard’s profile is his “undrafted” pick status. By simply making it to this point in his career, he’s overcome the odds. Though, Lazard should’ve been drafted. He posted a well above average 28.6-percent (85th-percentile) College Target Share, a 33.1-percent (62nd-percentile) College Dominator Rating, and a 19.7 (70th-percentile) Breakout Age at Iowa State. He was also on a roster that featured NFL-level target competition. Namely, Hakeem Butler.

His Best Comparable Player is Marques Colston, who was drafted in the 7th round of the 2006 draft and found immediate and prolonged success catching passes from Drew Brees. He posted 900-plus yards in nine of his first 10 years in the league.

Colston was fortunate to join the Saints in the same year as Brees, which certainly contributed to duos connection from the get-go. 2022 could finally be the year Lazard is met with similar opportunity.

The pre-requisites to become Aaron Rodgers‘ top target are straightforward: alpha size, plus-athleticism, and proven NFL-level dependability. Barring a big-time trade for a veteran, the only player that will meet these criteria on the Packers roster in 2022 will be Allen Lazard. The glaring dissimilarity between Jordy Nelson/Davante Adams and Lazard is draft capital. Both were selected in the second round while Lazard went undrafted. Lazard’s closest comp., Marques Colston, proves it’s possible to overcome low draft capital with a similar profile and skillset.

Lazard has carefully and successfully stacked every brick in the Rodgers-wall-of-trust, with the alpha runway finally cleared. Particularly at his current price (Underdog ADP pick No. 192) I’m all in on Lazard in the mid-rounds, with him primed for a top-20 overall WR finish.