The 2022 Cowboys Backfield Breakdown is part of an offseason series in which I take a deep dive into one NFL team’s backfield and examine the respective rushing performances of the players in it. In doing so, I hope to gain insights into key players from a talent evaluation standpoint, and using that evaluation as a baseline, from a dynasty valuation standpoint. The first installments in the series can be found here.

The Dallas Cowboys finished No. 12 in the league in rushing attempts last season. They averaged slightly more than one attempt per game more than league average. They were in a similar spot in the first year of the Mike McCarthy era; finishing No. 15 in the league and just one carry shy of league average in 2020.

According to rbsdm.com, the Cowboys were No. 25 in the NFL last year in early-down run rate in neutral Game Script situations (when win probability for either team did not exceed 80-percent). The year before, they were No. 13 in the same metric. Kellen Moore simply let Dak Prescott cook much more often last year than the year prior.

Personnel changes on offense could shift that pattern a bit. But we should anticipate the Cowboys being slightly below average in total rushing attempts in 2022.

Dallas had one of the most consolidated backfields from a carry distribution standpoint last year. Ezekiel Elliott and Tony Pollard accounted for over 90-percent of total running back carries. Along with Corey Clement, JaQuan Hardy, and Ito Smith, here are the complete rushing efficiency profiles for those Cowboy runners:

What we see here is what the people have been saying for two years now. Pollard is a more dynamic and efficient player than Zeke is at this point in their careers. In 2021, that fact was as pronounced as it has been since Pollard joined the team back in 2019. According to a composite formed out of the percentile ranks of player performance in BAE Rating and RSR, here is how Elliott and Pollard stack up to each other in overall efficiency in their three seasons together: 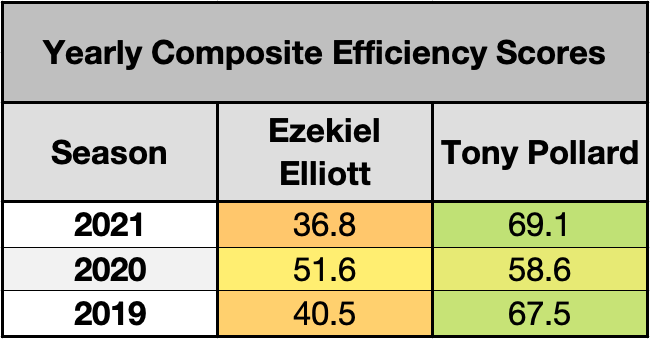 Before Pollard got to town, Elliott was a highly-drafted running back in his early 20s who had put up composite scores of 84.6, 52.3 (in that suspension-shortened 2017 season), and 89.7. When healthy and in shape, he was consistently one of the best pure runners in the league as a young player. The decline has come quickly for Zeke. He’s recently only added value in short yardage and against heavy box counts relative to Pollard’s output.

The other guys for Dallas are pretty unremarkable.

My general takeaway here would be to sell Ezekiel Elliott in dynasty. He’ll be 27 at the start of the 2022 season and has been an inefficient compiler for three straight seasons. On the flip side, I would also advise dynasty gamers to scoop up all the Tony Pollard they can; considering how dynamic he’s been in the RB2 chair and the increased fragility that Elliott carries into each subsequent season as he ages.

Those would be my takeaways. But they also would’ve been my takeaways in 2020 and 2021. And Dallas doesn’t seem to care that Pollard is better on a per-touch basis than Zeke is. There doesn’t seem to be much hope of Pollard just unseating Elliott as the lead back. Those holding out hope for Pollard as a high-upside play hope Zeke gets hurt or faceplants from an effectiveness standpoint. The problem there is that Pollard himself is going to be 25 this season. Nearly the entirety of his would-be prime has already been wasted in a complementary role as a hypothetically valuable handcuff.

The other issue with Pollard is that he’s nearly 6-0 and only 210-pounds. He’s proportionally built like Danny Woodhead. Even if Zeke is no longer a viable solution, we probably shouldn’t view Pollard as some sort of 1-to-1 replacement. They would almost certainly add another workhorse-type player. Or at the very least, add a two-down pounder to complement Pollard’s spacier skillset.

We’re left playing the same game we’ve been playing with the Ezekiel Elliott–Tony Pollard duo for the last three years. Except the value that Pollard’s youth added to that equation is nearly gone.

For win-now dynasty teams, or those looking at this backfield in redraft, Elliott’s a safe pick with a subdued ceiling. Pollard is still one of the best handcuffs in the league. If you’re in any other situation, you need to divest from Pollard while he still carries sexy “sleeper” value.

We’re approaching the moment of truth on this backfield. The most likely outcomes for Pollard all end in disappointment for dynasty gamers. Cash out and get off the ride while you still can.