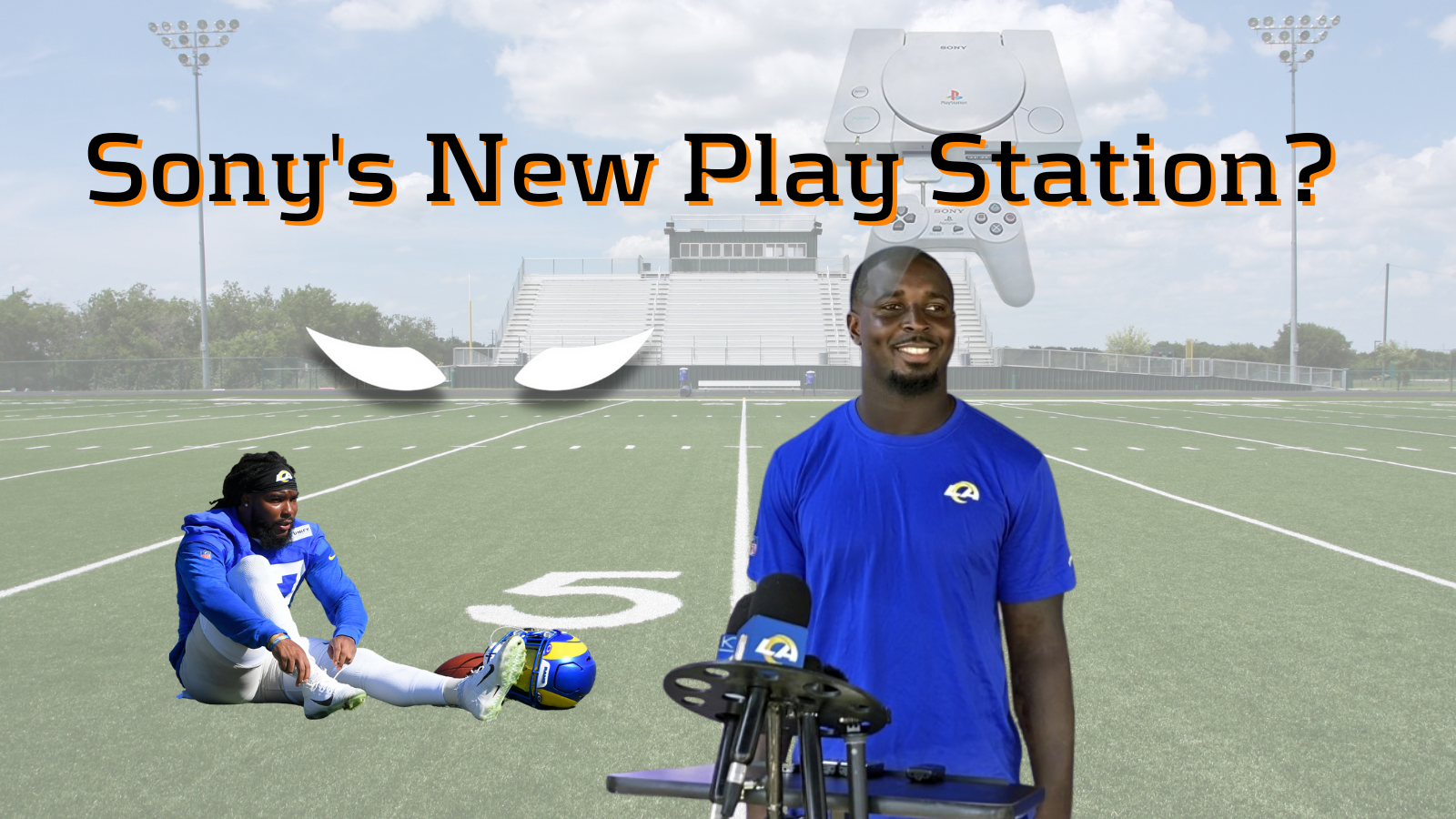 When disaster struck the Los Angeles Rams and Cam Akers this summer, and a torn Achilles put him out for the year, expectations across fantasy leagues was that Darrell Henderson would slip into the RB1 chair in Los Angeles. While not expected to reach the lofty heights projected for Akers, Henderson was being counted on as a solid, starting fantasy running back and was being drafted accordingly.

Well, when Raymond Calais broke his foot, though the Rams were certainly not expecting much of Calais, mind you, they were left with an RB corps of: Henderson; 2021 UDFA Otis Anderson, a 179-pound back who posted an a 4.70 (20th-percentile among qualified running backs) 40-Yard Dash, 2019 UDFA 24-year old Xavier Jones, and 2021 7th-round pick Jake Funk out of Maryland, whose college productivity maxed out at 516 rushing yards, four touchdowns and 10 catches as a 23-year old Senior.

This must have been enough to kept Head Coach Sean McVay and GM Les Snead up at night.

Then, the straw broke the camel’s back as Henderson came up with a sprained thumb.

Having mortgaged their future to win now with Matthew Stafford, could the Rams possibly lean on the running back firm of Anderson, Funk and Jones?

Not a chance. But, did they look to add RB depth behind Henderson by signing an established, now-on-the-street backup RB or by trading a conditional last-round pick for a veteran backup? Or did they choose to wait another week or so for a team (like the Patriots, maybe?) to release a capable backup & add one for free?

No, again. They decided to pay a high price (as RB prices go, anyway) for Sony Michel, a former first round running back who, despite his naysayers and injury concerns, has had his fair share of NFL success.

So, what does this mean for Henderson, Michel and for our fantasy teams?  Will Henderson be the lead back and Michel the backup? Or will Sony play a more prominent role for the Rams than ADP suggests? In other words, might SoFi Stadium become Sony’s new play station?

Let’s look at these two players and the trade.

At Memphis, Darrell Henderson posted an amazing 8.9 yards per carry in BOTH his age 20 and 21 seasons. Though not a noted receiver, he was an explosive home run hitting rusher for the Tigers, earning unanimous All-American honors as a Junior. 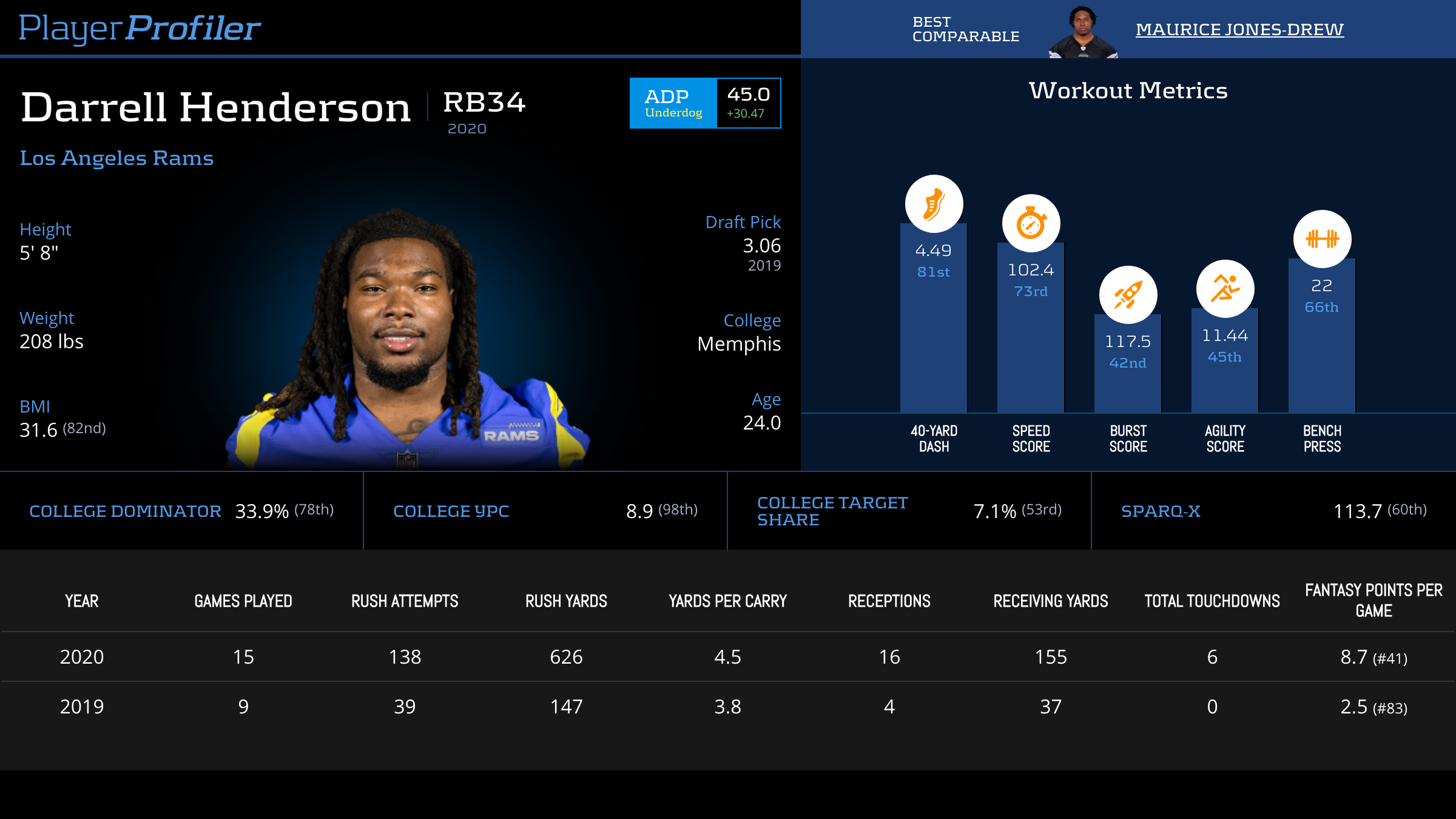 In the 2019 draft, the Rams sent two picks to Tampa Bay to move up to pick No. 70 and select Henderson. With Todd Gurley coming off back-to-back First Team All-Pro seasons, Henderson played sparingly as a rookie, finishing third in rushing yardage for the Rams behind both Gurley and Malcolm Brown.

After Gurley’s lackluster 2019, when the Rams unceremoniously shipped Todd out of town, it looked like the 2020 season would be Henderson’s coming out party. So, did Snead and crew commit to Henderson?

No. Before Henderson’s second season, the Rams drafted a bigger back who was just as fast and athletic in Cam Akers. And, they spent an earlier draft pick to do it.

Teams don’t spend earlier draft picks on a running back if they feel they’ve already got their new lead guy.

But, 2020 would give Sean McVay a chance to show who’d be his next long-term lead back. Would it be Henderson?  No, again.

Akers started his first-ever NFL game, toting the rock 14 times against Dallas (versus Brown’s 18 carries). Henderson, nursing a hamstring injury, had three touches. As the season rolled along, even when Akers was out, did the Rams commit to Henderson? Still, no.

In his 24 NFL games, Henderson has posted one with more than 15 carries and has one 100-yard rushing performance.

We all know Sony Michel, like Darrell Henderson, was a decorated collegian. He put up over 6.0 Yards Per Carry over his career for Georgia against SEC defenses and, as a senior in 2017-2018, posted 1,227 rushing yards and 16 TDs at nearly 8.0 yards a clip.

While many folks have rightly been concerned with Michel’s knees, he averaged 12 games a year at Georgia and has missed only three games because of knee issues in his three-year NFL career. 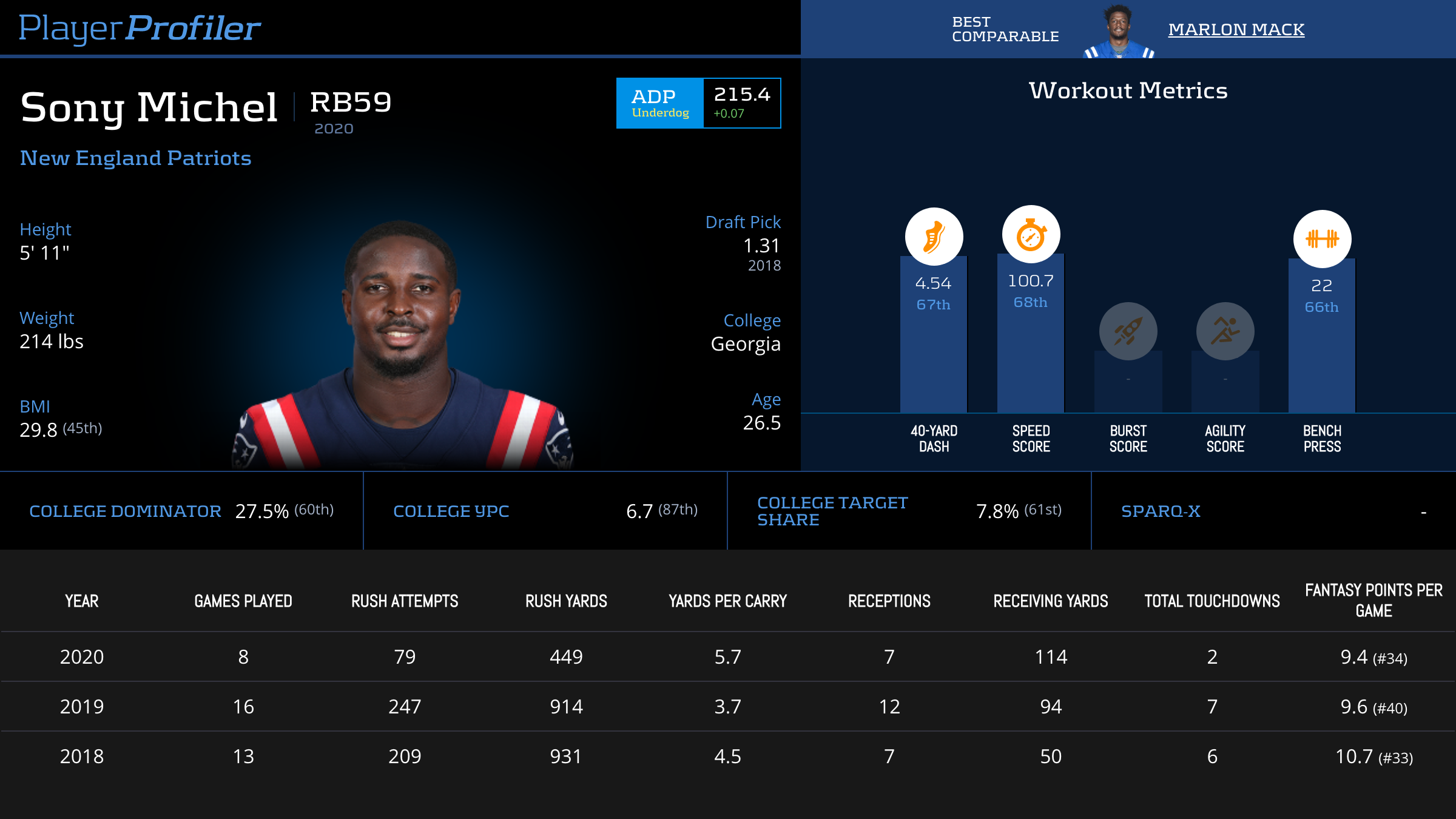 To date, Michel’s NFL productivity has dwarfed Henderson’s. Yes, Henderson hasn’t had as many opportunities and has been in the league one fewer year. But Bill Belichick, who seemingly hasn’t liked a running back since LeGarrette Blount, actually leaned on Michel early and often. In 37 regular season NFL games, Michel posted 17 games with more than 15 carries and put up five regular season 100-yard rushing performances. In his four career playoff games, Michel averaged over 100 total yards and 1.5 TDs on 22 touches per game. At crunch time, Bill and Tom Brady powered on their Sony.

Most recently, when Michel played in 2020, what did he offer? Actually, quite a bit. His 2020 performance metrics were remarkable when he was on the field: 6.5 (No. 1) Yards Per Touch, 7.6-percent (No. 2) Breakaway Run Rate, 5.18 (No. 2) True Yards Per Carry, and 2.15 (No. 4) Yards Created Per Touch. He managed this despite seeing the fourth-most Stacked Fronts (38.0-percent) and sixth-most Average Defenders in the Box (7.25), which he faced mostly because Cam Newton somehow managed to post a 32nd-ranked Accuracy Rating despite throwing for a 32nd-ranked Air Yards Per Attempt.

The Rams wanted to plug Sony Michel into their roster. They wanted him enough to send a fourth and sixth round draft pick to the Patriots now.

They didn’t want to wait even days to see if the Pats might release Michel or move him somewhere else. Well, teams just don’t send two picks for a running back. The Rams haven’t traded for a running back in over 30 years. When was the last time any team traded a pick or picks that high straight up for an RB? Not often, as it turns out:

And that’s been about it.  This shows us that what LA sent for Michel was not spare change Snead and McVay found in the couch. This was serious draft capital, a lot to pay for a running back with one year left on his rookie deal if you’re not at least considering him a strong 1B to your in-house 1A. By their actions, the Rams have shown they want someone to turn to should the workload prove too much for Henderson or should they again decide Henderson is not their bell cow.

So Where Does This Leave Fantasy Owners?

According to Underdog Fantasy, in the last week, Sony Michel has risen slightly yet remains several rounds behind Darrell Henderson, who has plateaued at around RB20.

While we expect Henderson to be the Rams’ RB1 in 2021, the team’s actions say we should proceed with caution. When they had a chance to commit to Henderson after dumping Gurley, they didn’t. When they had a chance to lean on Henderson during 2020 when Akers was out, they didn’t.  And when Henderson had his first sign of injury this summer, they jumped on an opportunity to pay a hefty price for a recent first-rounder who has performed well in the NFL and was drafted just one year before Henderson.

Go ahead and draft Henderson but be careful if you’re going to commit to him more than the Rams have been willing to do.

I’ll go ahead and snap up Sony late in the draft and be ready to plug him into my roster.