I used to happily take Arizona wide receivers in the 4th-5th round of drafts.  It was a simpler time.  Larry Fitzgerald, John Brown and Michael Floyd, I wanted them all.

A contrarian view threatened to upset my naive sensibilities.  Hidden behind rows of wide receiver college data, workout and performance metrics, it haunted me.  A data filter here and a sort there soon sent my utopia into a full-blown identity crisis.  Forged from the bowels of the PlayerProfiler Data Analysis Machine, I had been entrusted with an ADP slaying, hot take sword.  Here comes the fire.

Torrey Smith should be valued above the “Arizona Three” of Larry Fitzgerald, John Brown and Michael Floyd in 2016.

In terms of raw talent, Torrey Smith is in the same class as the “Arizona Three.”  Efficiency matters and last year Torrey Smith produced 10.7 Yards Per Target.  This was a higher rate than Larry Fitzgerald, Michael Floyd and John Brown.  But what about game flow differences you say?  Torrey Smith threw down an elite +24.5 Production Premium.  Get off my lawn, that’s a situation agnostic metric son!  Could Torrey “bang” at the college level?  His 41.1-percent (80th-percentile) College Dominator is reporting for duty, yes sir, yes sir!

All Hail the Microwave King

Predicting Arizona wide receiver outputs is like playing three-card Monte against Bruce Arians.  Bruce Arians doesn’t care about your fantasy team.  Bruce Arians cares about winning and spreading targets between his receivers is the optimal approach for his team.  The 2015 Target Shares of Larry Fitzgerald (26.5-percent), John Brown (19.6-percent) and Michael Floyd (17.1-percent) should have a tighter spread this year.

Is the below scenario, so implausible?  Torrey Smith and the “Arizona Three” could easily have very similar outputs this season.  Last year with this projection, Smith, Larry Fitzgerald and John Brown would have finished as the WR20, Michael Floyd as WR35.  Smith can still be drafted in the 7th round or later and his average positional ADP rank is WR43.

This conservative projection shows a sense of 2016 baseline expectations. 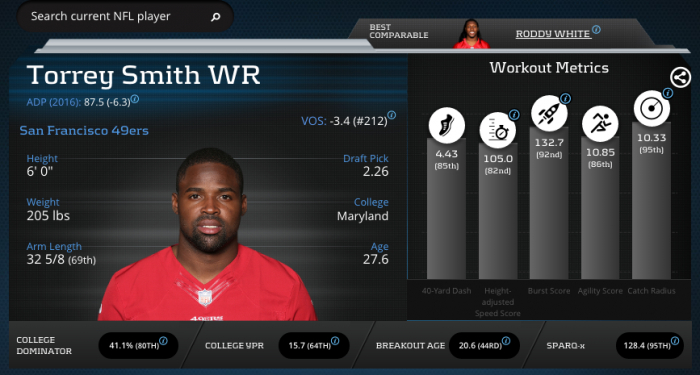 In 2015, Torrey Smith’s counting stats crashed short of expectations, due to Anquan Boldin soaking up an absurd 24.2-percent Target Share.  The 2015 49ers wide receivers had an efficiency gap between Smith and all the rest.  Illuminating this efficiency imbalance was Torrey Smith’s 2015 Target Premium, firing in at face melting +31.4 (No. 6).  Surprisingly though, improved quarterback play is not a prerequisite for Torrey Smith to perform efficiently.  With the current 49ers quarterbacks, Smith supplied 1.99 Fantasy Points Per Target in 2015, good for the #15 ranking in the league.  Provide Smith with around 140 targets, a pinch of the right variance and he is a WR1.

The “Arizona Three” are a smoldering attic fire.  Their individual talents have a fiery upside near the roof.  With all three on the same field, their ceiling has a combustible fragility, which inhibits the max output they separately could achieve.  They burn away at each other’s target volume, touchdowns and snap share potential.  Meanwhile, Torrey Smith also has ceiling scorching ability, but with an escape hatch.  A target opportunity, efficient producing, escape hatch.  Take the value, take the upside, it’s automatic bro, just take the Torrey Smith escape hatch.