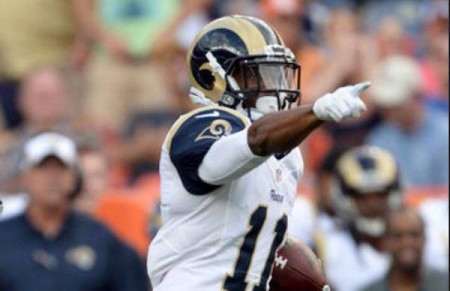 The Los Angeles Rams. As an Angeleno, I like the sound of it, even as I feel for jilted St. Louis fans.  But has the Greatest Show on Turf moved west, or will we get more ground-and-pound in 2016?  It doesn’t take a pigskin soothsayer to answer that question (Kurt Warner’s single-season records are safe), but there is always fantasy value to be found in even the weakest passing game.  And make no mistake, the Rams had the league’s worst last year, finishing dead last in passing yards, passing touchdowns and QBR.  The only way to go is up…

Let’s not bury the lead, shall we?  The biggest takeaway from my attempt to read the tea leaves on the Rams’ passing game is this: buy Tavon Austin.  I know, I know; he’s too small to thrive in this league, he’s a gadget guy, yadda, yadda.  Yet the deeper I dug, the more convinced I became that Jeff Fisher genuinely wants Austin to be the focal point of the passing game.   Admittedly, the idea that Austin could “double in catches over what he had last year” also reveals that Jeff Fisher does not understand how statistics work.

Of course Tavon Austin will not reach 100 receptions operating in the Rams’ run-first offense, but Fisher’s sentiments are more than baseless coachspeak.  After increasing his target count from 45 in 2014 to 87 in 2015 (a 95-percent jump), Austin should approach 100 targets now entering his fourth year and fully acclimated to the demands of the NFL.  Given this projected opportunity, Austin is a screaming value at his current WR45 ADP.

As the architect of the aerial attack, newly hired passing-game coordinator/wide receivers coach Mike Groh has acknowledged that Tavon Austin is the best weapon in his arsenal.  “You start with Tavon,” he said in video interviews for the Rams’ official site.  He told the Rams’ correspondent that he noticed the emphasis defensive coaches put on stopping Austin, whom he called “a threat to score every time he gets it.”  Groh’s glad that Tavon is on his side now.

Groh coached receivers for the Bears during Marc Trestman’s tenure and Adam Gase’s one year as Chicago’s offensive coordinator.  The coach names both men as influences and said Los Angeles hired him to bring new ideas to the table.  Groh has been credited in the impressive development of Alshon Jeffery’s game and could tutor Tavon Austin as well.  A quick-hitting, West Coast-style offense with some use of spread concepts lends itself to Austin’s game, which at this point consists of short routes and a lot of run-after-catch.  It’s also conducive to safe, efficient quarterback play, which is important when you have an inexperienced passer under center (cough, Goff).  Groh’s background and recent comments suggest that such an approach is likely.

Tavon Austin’s usage may remind us of how the Dolphins funneled their short passing game through Jarvis Landry.  In that instance, Miami used Landry in lieu of a running game.  Here the presence of uber-mensch Todd Gurley at tailback should mean stacked boxes.  A lot of them.  If the Rams can finally figure out how to feed Austin farther than five to seven yards out, he’ll have plenty of big-play potential on the other side of those bunched defenders.  Then again, if Gurley struggles, so will the passing game.

There are more reasons for optimism here. With player safety a paramount concern in today’s NFL, small, lightning-quick receivers can thrive in a way they didn’t just five years ago.  The water bugs aren’t getting eradicated over the middle anymore.  Tavon Austin has been a role player to this point in his career, but he did score 9 touchdowns in 2015 — the most important, if hard-to-predict source of fantasy points — and has led the team in targets in two out of his last three seasons.  And yet, he’s seen very little volume.  According to Pro Football Focus, 44 receivers saw more targets than Austin last year and 50 had more snaps in route, but he still scored the 17th most fantasy points per opportunity. In 2015 Tavon Austin’s 9 touchdowns and 2.24 fantasy points per target buoyed his fantasy production.

A creative play-caller with a commitment to getting Austin the ball will be rewarded. Groh is sure going to try.  There may not be much fantasy goodness for other pass-catchers, however.  At every level to date, Rob Boras has been a run-first guy.  As a position coach he specialized in offensive line and tight ends.  That doesn’t mean he’ll be ineffective, however. The Rams’ offense showed signs of life when he took over as coordinator late last season.  In the five consecutive defeats leading to former OC Frank Cignetti’s firing, the Rams averaged an anemic 10.8 points per game. In the team’s 3-1 finish under Boras, that PPG jumped to 22.75.  Granted, the Rams played the Lions, Bucs and 49ers during that stretch, a weak slate of defenses, but Boras’ offense did score two touchdowns en route to an upset win in Seattle.

Even after drafting someone they hope is a franchise quarterback, the Rams’ plan is to play smothering defense, run the ball and avoid wild shootouts.  While L.A.’s free-agent ledger sheet doesn’t look good in terms of gains and losses, the stoppers shouldn’t take a noticeable step back in 2016. E.J. Gaines and LaMarcus Joyner seem ready to step up and offset the loss of gambling cornerback Janoris Jenkins in free agency.  An average linebacker would be an upgrade on fading James Laurinaitis, now a Saint, and Akeem Ayers is at least that.  At tackle, Patriots cast-off Dominique Easley has the potential to be every bit as good as the departed rotational standout Nick Fairley, though he comes to L.A. with question marks.  There is a hole that may not be adequately filled at strong safety.  Still, this defense is driven by a powerhouse line that will make things a lot easier for the back end.

With a stout defensive unit it’s safe to say the Rams won’t be chasing points every week.  They’re unlikely to trail by such large margins that they can rack up numbers in “extensive garb-age time” (to quote Marv Albert).  This team is built for close, low-scoring games. Still, dates with the 49ers (twice), Bucs, Lions, Giants, Dolphins, Patriots and Falcons could yield fantasy goodness.

It will be fascinating to watch the development of rookie signal caller Jared Goff and his intriguing classmates Pharoh Cooper, Mike Thomas, Tyler Higbee and even, perhaps, UDFA Nelson Spruce (a PFF favorite).  This is a talented bunch who will be given the chance to grow alongside Todd Gurley.

Still, it’s unlikely that any of the rookies will have much fantasy value in 2016.  Jared Goff is green — as NFL Network’s Steve Wyche put it, right now “he’s swimming in it” — and the rookie needs to progress in leaps and bounds if he’s going to start in Week 1.  I think he will.  Goff has the timing, anticipation, accuracy and footwork to complete NFL throws, even in tight windows, and should improve this offense right away.  According to Pro Fooball Focus, in this class Goff was the top-rated quarterback against pressure, vs. the blitz and on third downs.  But QB is the deepest position in fantasy and L.A.’s cast-of-thousands receiving corps doesn’t have much proven firepower. It’s a muddle.

I’m not buying Kenny Britt or Brian Quick.  Todd Gurley and Tavon Austin will be lead dogs (especially the former Georgia Bulldog) and the supporting cast is likely to divide touches fairly equally this year.  Fourth-round selection Pharoh Cooper is a good fit for the offense who lit up OTAs, picking up the playbook quickly and running with the first team.  It’s a boost to his dynasty stock and there’s some chance he becomes the definitive second option in the passing game, perhaps as soon as this year.  If Austin goes down, Cooper could be the main beneficiary.  Though dissimilar physically, both offer versatility and run-after-catch ability.

I’ve been a Cooper skeptic until now and still prefer Mike Thomas as a talent, but he’s a patience play whose chance may come with Kenny Britt and Brian Quick’s departure after the season.  Finally, Boras has helped produce numbers for tight ends in the past. Lance Kendricks is a deep-league sleeper, as a proven red-zone target and potential rookie QB safety blanket.  Tyler Higbee is a highly regarded prospect with long-term appeal.  He could even supplant Kendricks this year.

HBO’s Hard Knocks will focus on these L.A. Rams in 2016, which should be must-see TV (as always).  Much depends on the young offensive line coalescing, but a gifted quarterback, a franchise runner and a tiny dynamo at WR named Tavon Austin could be enough to lift the Rams’ passing game out of the bottom 10 in 2016.