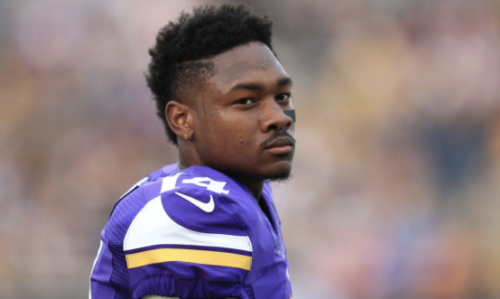 In January 2014, Rotoviz writers Shawn Siegele and Frank DuPont introduced the fantasy football world to the Breakout Age metric. Breakout Age is defined by the first season in which a receiver achieves a 20-percent or higher College Dominator Rating. Analytical analysis suggests earlier Breakout Ages increase the likelihood increases that the player will have a successful NFL career. Breakout Age is one of the most predictive advanced stats and metrics on any wide receiver prospect profile and a critical component of a college receiver talent evaluation. 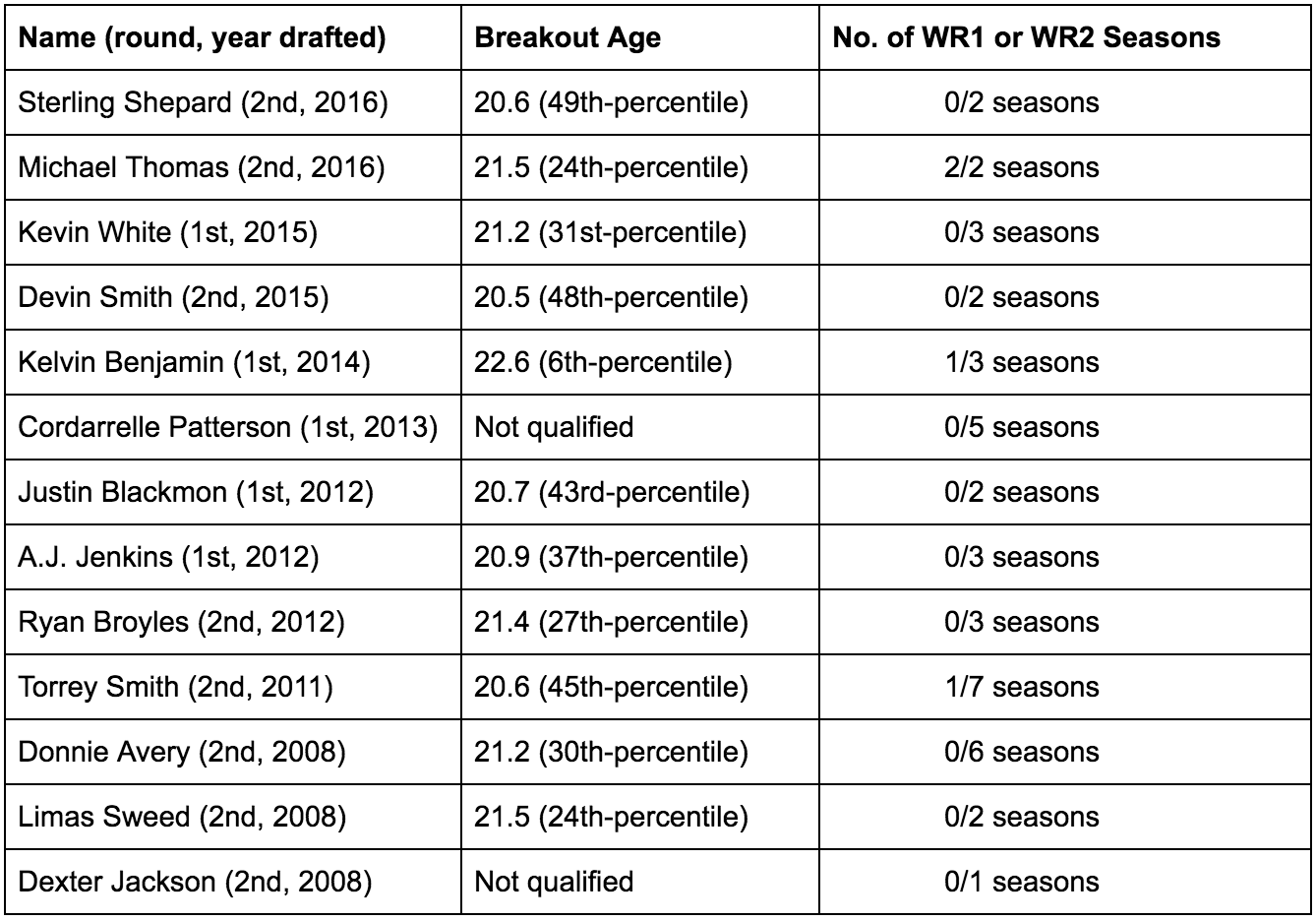 While the sample size consists of only 13 players going back to the 2008 NFL Draft, we see the names of several noteworthy first round busts such as Kevin White, Cordarrelle Patterson and A.J. Jenkins. This trio checked several boxes that draft analysts look at when attempting to evaluate players. White had a seemingly appealing combination of an elite 114.7 (95th-percentile) height-adjusted Speed Score and 36.8-percent (73rd-percentile) College Dominator. Patterson’s allure was based on his solid NFL Combine performance, along with occasionally flashing his big-play ability on special teams, and as a deep threat at Tennessee. Jenkins was a mega-producer at Illinois, recording a 55.2-percent (97th-percentile) Dominator Rating, and tested extremely well at the Combine, with his 102.0 (73rd-percentile) Speed Score being his lowest percentile Workout Metric.

White, Patterson and Jenkins posted below-average Breakout Ages, and that should have been the dire warning sign associated with these players. In fact, Patterson never met the 20-percent or higher College Dominator threshold needed to consider a college season a “breakout,” yet was drafted in the first round by the Vikings in 2013.

Check out Stefon Diggs on the PlayerProfiler Dynasty Rankings:

Stefon Diggs is the most egregious recent example of Breakout Age oblivion, lasting until the 5th round in the 2015 NFL Draft. The Vikings finally selected Diggs with the No. 146 pick, the steal of the draft. Diggs was a phenom at Maryland, posting a 36.1-percent (71st-percentile) College Dominator Rating while possessing an absurd 18.6 (97th-percentile) Breakout Age. The combination of an elite Breakout Age and well above-average College Dominator did not send Diggs skyrocketing up draft boards like it should have, as he was the 20th wide receiver drafted. Wide receiver Devin Smith, drafted in the 2nd round partly due to his eye-popping 28.2 (99th-percentile) college YPR and stellar NFL Scouting Combine, had his late Breakout Age ignored. Wide receiver DeAndre Smelter, who was taken in the 4th round by the 49ers, took advantage of his late 22.8 (5th-percentile) Breakout Age in college. Smelter dominated much younger competition en route to a 43.7-percent (87th-percentile) College Dominator Rating, but has yet to make an impact in the NFL.

While an upper-percentile Breakout Age can not guarantee NFL success, it surely could have provided more insight into the future prospects of Antonio Brown. Brown’s impressive tenure at Central Michigan was downplayed due to the lack of competition faced during his time there, as well as perceived flaws that stuck out to tape grinders such as his lack of refined route running and a lack of physicality. So much for that. Brown has dominated the competition since the minute he stepped on the field at Central Michigan, posting 1,003 receiving yards and 6 touchdowns in his freshman season, good enough for a 19.2 (86th-percentile) Breakout Age. Brown followed up his stellar freshman season with a 998 yard, 7 touchdown sophomore season, and a 1,198 yard, 9 touchdown junior season, before declaring for the draft at age 21. Brown’s demonstration of elite age-adjusted production should have been taken more seriously, as Brown is well on his way to the Hall of Fame, and to quite possibly becoming the best wide receiver in NFL history.

Looking ahead to the 2018 NFL Draft, the wide receiver position is notably thin compared to previous years. Alabama wide receiver Calvin Ridley is frequently mocked in the top-10, suggesting the industry has not learned much about the dangers of selecting players with a below-average Breakout Age in the early rounds. Ridley’s college performance metrics point to a player who will underperform his draft stock at the next level. Ridley posted a respectable 30.1-percent (51st-percentile) College Dominator Rating but relative to his 20.7 (42nd-percentile) Breakout Age, the production is not as impressive. Wide receivers drafted in the first round should have phenomenal age-adjusted production in addition to an at least passable Dominator Rating, not the other way around. Of the 41 seasons played since 2008 by wide receivers selected in the first and second round with a below-average Breakout Age, just 4 finished top 24 at the position. Ridley fits this mold and will presumably become the first wide receiver with a below-average Breakout Age to be drafted in the first round since Kevin White in 2015. Whichever team drafts Ridley better hope his average production posted against younger competition was not a fluke.

Breakout Age also tells us that we should be paying attention to Texas A&M wide receiver Christian Kirk. As an 18 year old freshman in 2015, Kirk displayed exceptional age-adjusted production, tallying 80 receptions for 1,009 yards and 7 touchdowns. That was good enough for an 18.8 (93rd-percentile) Breakout Age and a 32.6-percent (59th-percentile) College Dominator. Kirk also scored an incredible total of seven touchdowns on special teams during his three seasons at Texas A&M. Kirk, like Calvin Ridley, could very well be drafted in the first round. However, due to Kirk’s elite Breakout Age, he possesses a much higher ceiling and floor than the aforementioned Ridley and would be a much safer pick in the 2018 NFL Draft, as well as in dynasty rookie drafts.

In recent memory, only a select number of first and second round wide receivers have been able to flip the script and have productive NFL careers despite a below-average Breakout Age. While Breakout Age is not a strict forecaster of whether or not a wide receiver will have a successful career, it has been able to identify potential busts in players who seemingly checked all of the conventional boxes. Additionally, Breakout Age prevents under-the-radar players from going unnoticed any longer, as well as cements phenom status on college mega-producers who first took the college field at a young age.