You know what sucks festering, puss-ridden donkey balls? Trying to use running back efficiency stats like yards per carry to predict if a player will be good in the upcoming season.

As you may have heard, yards per carry is notoriously unstable year-over-year. So is every other efficiency based metric we use to judge how well a back has performed on a per down basis.

In many respects we are still in the dark ages when it comes to understanding a running back’s contribution to a team’s running attack. There are few plays in football that require more timing and teamwork than a well executed running play. One bad read by the center or QB; one weak link in the churning ballet of the hog mollies as they pull, drive and cut; one misstep from either the QB or the running back at the mesh point and the play will end in failure.

Because of this, apportioning credit or blame in the run game is difficult. There is, however, one aspect of play in which a running back seemingly has almost complete control: breaking a tackle or making a man miss. PlayerProfiler‘s Evaded Tackles metric incorporates both. Evaded Tackles are also the underlying statistic powering Juke Rate (evaded tackles per touch), a per-play adjusted measure of tackle evasion ability. Are these stats stable? Are they predictive? Can we use them to make better forecasts?

To test whether these metrics are “sticky”, or stable year-to-year, I grabbed three years of evaded tackles data from the PlayerProfiler Data Analysis Tool. I took year N Juke Rate, Evaded Tackles, and Evaded Tackles Per Game and ran a regression of each on the year N + 1 versions of the same stats. So, as an example, if a player played in both 2014 and 2015, I compared his 2014 stats for evaded tackles per game with his 2015 stats. I also did this for 2015-2016.

Here are the results.

What we find is that evading tackles is indeed sticky year over year. If you aren’t familiar with it, the interpretation of r-squared is easy to understand. You can think of it like a test score or a batting average. Higher is better. For instance,  an r-squared of 0.17 means that 17-percent of next season’s evaded tackles are explained by this season’s evaded tackles.

To give this some context, each season over at 4for4.com, TJ Hernandez publishes the year over year correlations (also called simply r) for various running back stats. If we take his results and square them (to get r-squared) we get the following table of values: 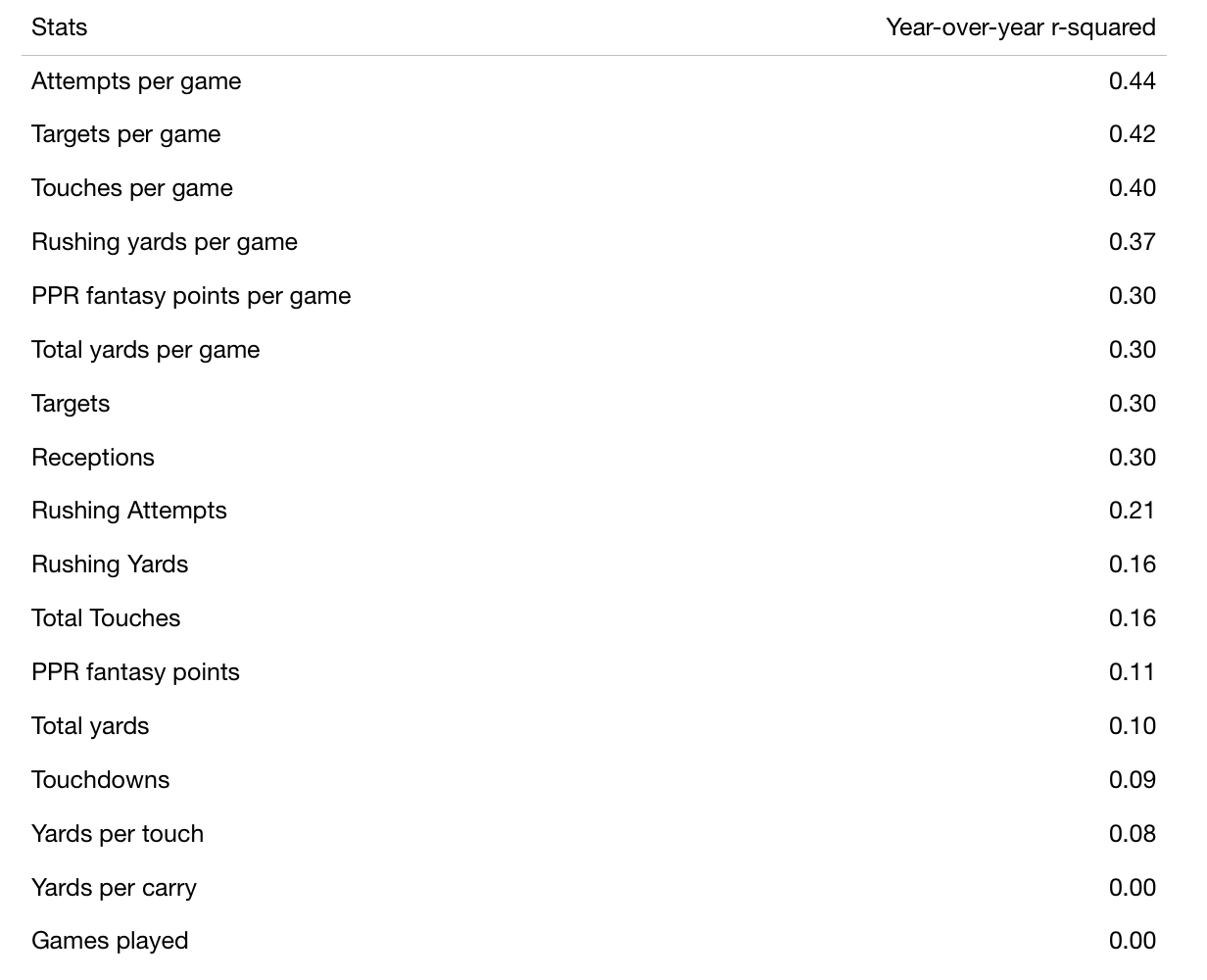 What we find is that evaded tackles per game does exceptionally well. It is as stable year-to-year as some of the most important stats we track, including PPR fantasy points per game. This is exciting news, because evaded tackles per game capture a very specific part of a player’s innate skill at the game of football in a way the other stats do not. It’s far less dependent on the running back’s team, and so should follow him wherever he goes.

With all this in mind, here are the top 10 RBs measured by evaded tackles per game from 2016 along with their positional and overall ADP on My FantasyLeague.com. 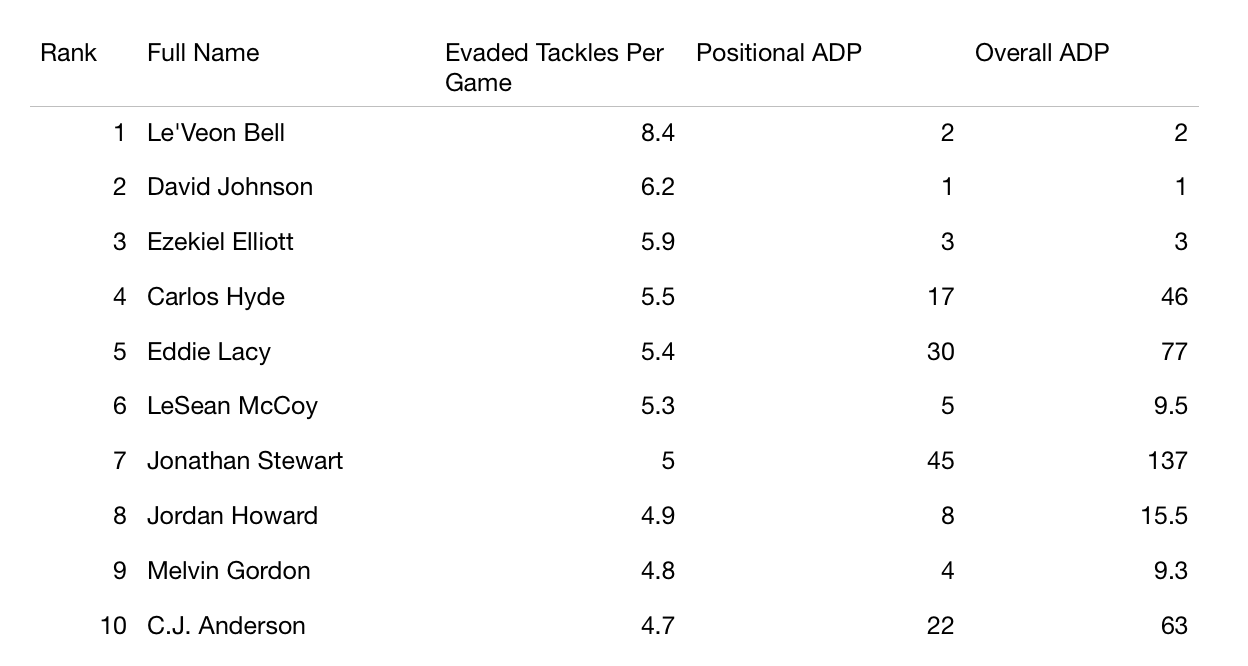 What jumps out immediately is the quality of the running backs on this list. The top three backs in evaded tackles per game in 2016 are the top three picks by ADP in 2017. Moreover, Jonathan Stewart, Eddie Lacy and C.J. Anderson appear to be screaming values at their ADPs. They excel at one of the only player specific skills we have the ability to reliably measure.

Jonathan Stewart is the clear favorite for goal line work in Carolina and he has the ability to extend plays by breaking and evading tackles against stacked boxes. The Panthers will not want Cam Newton to stick his head into those scrums this season and risk another concussion, and Stewart owned and dominated those carries last season. Stewart had a TD Rate of over 10-percent on carries against a stacked defensive line last season, one of the best marks in the NFL. There is little reason to believe he will be supplanted by the smaller, unproven rookie from Stanford. If Carolina wins 10 or more games, J Stew could be the 2017 version of LeGarrette Blount. It’s within his range of outcomes.

Eddie Lacy stands to benefit in much the same way. He has landed on another strong offensive team after leaving the Packers in free agency and should get the vast bulk of the high value goal line carries. Like Jonathan Stewart, Lacy has shown he can both handle the load and break tackles to push it across the goal line. Lacy’s floor is probably higher than Stewart’s and it’s reflected in his higher ADP, but he also possesses a high TD upside because of his size and ability to break tackles against stacked formations.

Anderson is a bit more of an enigma. He is both less elusive and more expensive than the two players mentioned above. He also has heavy competition looming in the form of Devontae Booker. Still, at the cost of a mid-fifth round pick, C.J. Anderson is not a terrible value play and his talent at evading tackles shows that if he holds on to the starting job he has RB1 upside.

To wrap things up for those of you who skipped to the conclusion, here are the key takeaways:

• Always think in terms of per game averages. They are much better predictors than previous season totals because they adjust for games lost. This alone will give you a 20-percent edge on your competition (calculated across all positions) if they use raw seasonal totals to make their picks.

• Evaded tackles per game are among the stickiest, most predictable metrics we have for running backs. They are as predictive as total yards per game, and directly influence that stat. This means if a guy is good at breaking tackles he will tend to continue breaking tackles. And the opposite is also true. It’s a metric we can hang our hats on.

• Evading tackles lead to more yards and are largely in the control of the back, so target players who get a lot of them.

• Draft Jonathan Stewart, Eddie Lacy and C.J. Anderson if you are implementing a Zero RB Strategy this season.