The bell is about to toll on the 2019 NFL season, but there’s still time to earn a little extra money as we head into the holiday season. Using advanced stats and metrics to identify bargain running backs for your DFS matchups, as we have all season, we find a few familiar names and another ready to shine in primetime. Let’s dive back into the bargain bin once again and have a look at the best Week 16 running backs.

Mike Boone is sure to be among the chalkiest plays of the week. Right now, he has a chance to take over a significant workload in Week 16 with Dalvin Cook already ruled out and Alexander Mattison not a lock to play. Boone first had a chance to shine last week against the Chargers following Cook’s early exit. He finished that matchup with 13 total touches for 56 yards, finding the end zone twice to finish with 17.6 fantasy points (RB13). Assuming he gets the start, he would take over the lead back role for an offense averaging 31.0 (No. 3) run plays per game.

Boone profiles as a back built to handle his impending workload. With a 4.49 (80th-percentile among qualified running backs) 40-yard dash time and 140.9 (100th-percentile) Burst Score, there’s little doubt about his playmaking ability. He also features an 8.3-percent (61st-percentile) College Target Share to go along with his explosive workout metrics.

Likely heading into his first start of 2019, he couldn’t draw a better matchup. The Vikings a Packers team allowing +2.93 fantasy points above league average to opposing running backs this season (No. 8), and have allowed 24.3 fantasy points per game to running backs over the last five weeks.

There won’t be too many backs competing with Boone for touches in Week 16. Now is the time to get the ideal running back in the ideal situation for an ideal price.

With the 2019 season quickly drawing to a close, we have to begin to wonder how many more times Adrian Peterson will be available to us fantasy gamers. Washington has a tough matchup against the Cowboys in Week 17, meaning this Week 16 matchup against the Giants may be his last great game. We can’t even be surprised with the production we’ve seen out of Peterson in his age-34 season after bearing witness to what he did in his age-33 season. With two games left to go, he currently sits at 784 (No. 15) rushing yards on 183 (No. 19) carries and is averaging 9.7 (No. 37) Fantasy Points Per Game.

Peterson looked like an early-season beneficiary of the injury to Derrius Guice to start the season, but he has seen significant opportunity both with and without Guice in the lineup. 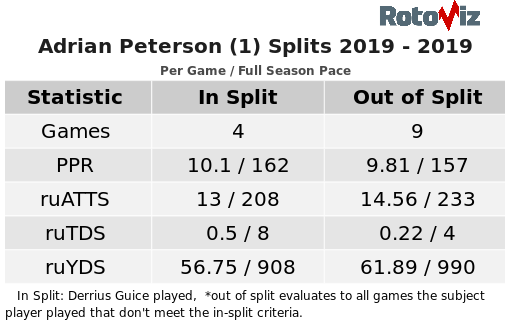 Those who need more proof that Peterson just might be the ageless wonder should consider his Week 15 game against the Eagles. He saw 19 touches for 91 total yards and finished the week with a season-high 18.1 fantasy points.

Washington next draws a stingy Giants defense that’s allowed -0.37 fantasy points per game below league average to opposing running backs this season (No. 18). While the Giants have proven tough against the run for the majority of the season, that Jets and Eagles did manage to post top-12 games in terms of fantasy points over the last five weeks.

It’s always fun to give a former bellcow one last shot at glory before he fades into the sunset. Peterson may only have one more chance to be a nostalgia play that can yield positive results.

It’s no secret that Kenyan Drake has been the bellcow back for Arizona since joining them in Week 9 against the 49ers. It’s also no secret that the Seattle Seahawks aren’t the great defense they once were just a few years ago. Now we have a chance to see the two collide for a Week 16 divisional matchup.

In Week 15, Drake bounced back from two straight duds. After scoring 16.8 combined points in the previous two weeks, he went off for 39.6 fantasy points against the Browns. He finished the day with 23 touches for 146 total yards and found the end zone four times.

Since arriving to Arizona, head coach Kilff Kingbury and the Cardinals have made it a point to get Drake involved. Drake has had a weekly Snap Share of 63.5-percent or better since joining the Cardinals, seeing 10-plus touches in every game over that span.

Back in Week 4, David Johnson hung 21.9 fantasy points on 19 touches for 139 yards against this Seattle defense. That’s not to suggest that Drake will do the same, but given his usage and Seattle’s recent struggle against opposing fantasy running backs, a similar line is within Drake’s range of outcomes.