The dynasty fantasy football offseason has arrived and there is plenty of value to be found. A torn Achilles tendon and Jonathan Taylor‘s emergence have stifled Marlon Mack‘s fantasy future. Mack’s fantasy potential has become an afterthought with Taylor ascending to excellence. There is plenty of unknown surrounding a player set to hit free agency who will return from a serious lower-body injury. What is known, and backed up by PlayerProfiler’s advanced stats and metrics, is that he is a talented player, making him perfect to pursue in dynasty.

Marlon Mack checks the boxes a dynasty asset should have. What makes him a superb asset to acquire is that he’s proven the talent on the field in the NFL already. He proved he could command a large workload in 2019, handling 247 (No. 9 among qualified running backs) carries and logging a 62.9-percent (No. 17) Opportunity Share. His 14 (No. 58) receptions on 17 (No. 63) targets came with zero (No. 90) drops. This shows that he can catch the ball out of the backfield if given the targets. He also had a 10.9-percent (79th-percentile) College Target Share. 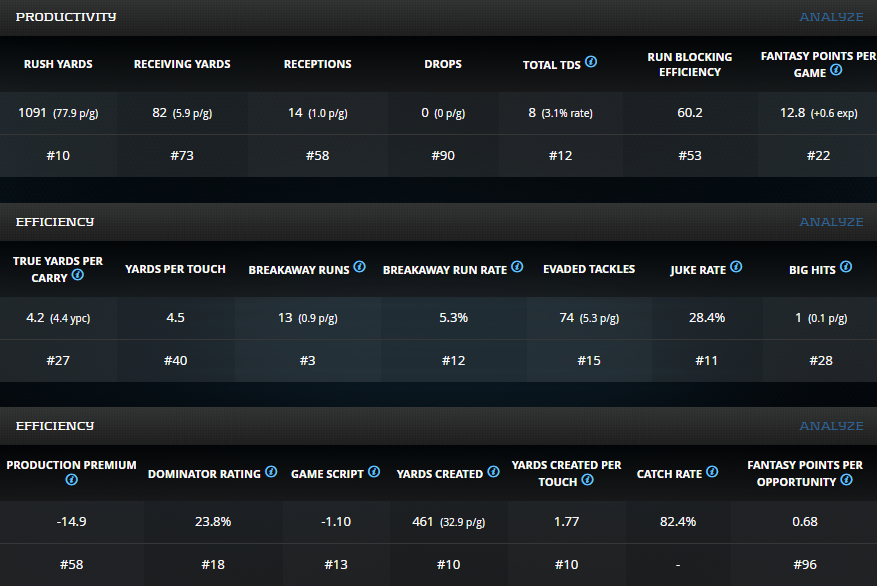 Mack’s talent was on display in 2019, leading to high rankings in important metrics such as Yards Created per Touch, Dominator Rating, Breakaway Runs, Evaded Tackles, and Juke Rate. Being on the Indianapolis Colts, it might be assumed that his success was due to great blocking. However, he was evading tackles and breaking off big runs with a 60.2 (No. 59) Run Blocking Efficiency rating.

Mack is still only about to enter his age-25 season. Being injured in Week 1, he will have a calendar year to recover and get back to his 4.50 (77th-percentile) 40-yard Dash form. His 103.9 (75th-percentile) Speed Score and 122.9 (72nd-percentile) Burst Score were just indicators for his big play ability. Taking a chance on running backs coming off lower-body injuries is risky, but his talent makes it worth the risk in dynasty.

Pre-free agency is the right time to acquire Marlon Mack before he signs with a team and his stock rises. He can thrive and provide low-end RB1/high-end RB2 production should he land in the right situation. The Atlanta Falcons would be the most ideal situation, but the Buffalo Bills and Pittsburgh Steelers are also teams that need more explosive blood in their running games.

Even if Mack ends up somewhere with competition, he will always have the chance to at least be a satellite back-plus. He proved he could succeed at this role in his rookie season. If impending free agents Kenyan Drake, Chris Carson, and Carlos Hyde are not retained by their respective teams, the Arizona Cardinals and Seattle Seahawks would be fantasy-friendly spots for Mack to end up in. If the New York Jets offense improves, he could earn a workhorse role there and have value.

Before he signs with a team, Marlon Mack can probably be acquired in most leagues for a late-round rookie pick. A productive, aging veteran wide receiver with little upside can also be thrown in to make the deal seem better for the other owner. Take a chance on an explosive playmaker in Mack and acquire him while he is a fantasy afterthought.