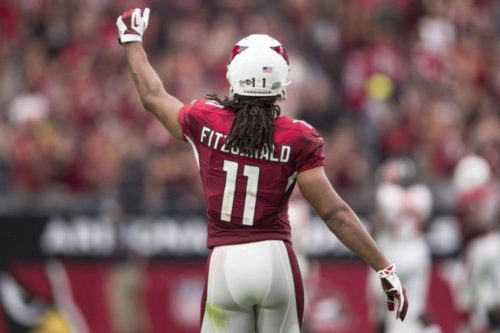 With Week 1 finally in the books, many teams employed player personnel as expected. However, a few teams gave the public exotic looks that remain worth monitoring in the near future. Here are a few trends to keep in mind for the coming weeks. Using them with advanced stats, metrics and analytics, we can identify value players in fantasy football.

Coming to the NFL from the college ranks, Kliff Kingsbury routinely spoke this offseason about using a multitude of four wide receiver sets and breaking the NFL’s plays-per-game record. Unlike a lot of coachspeak, Kingsbury kept his word in Week 1 against the Detroit Lions. While the Cardinals played an extra quarter in an overtime showdown, they still led the NFL in raw plays with 82. The Cardinals also led the NFL in seconds per snap (22.8) and no-huddle rate (41.5-percent).

In conjunction with their frantic pace, the Cardinals ran a slew of four wide receiver sets. In total, Larry Fitzgerald, Christian Kirk, Damiere Byrd and KeeSean Johnson all eclipsed 76-percent of Arizona’s offensive snaps in Week 1. Importantly, each of these receivers also saw at least seven targets. Add in David Johnson‘s seven targets, and a pass rate of 72-percent, and the Cardinals should contribute a number of fantasy relevant assets on a weekly basis.

Throughout Marlon Mack‘s career, the Colts have employed him as a two-down grinder, despite leaving USF with a 10.9-percent (78th-percentile among qualified running backs) college target share. The Colts appeared to re-commit to Mack in Week 1, feeding him 25 touches. Looking at raw usage alone, the Colts appeared to employ a time share at running back. Mack played 76-percent of the snaps, with Nyheim Hines playing 29-percent. While Mack saw 25 carries, he drew zero targets despite the team playing from behind. Hines handled eight touches, with four targets coming in the passing game.

However, Mack’s snap share of 76-percent Snap Share remains notable in a game the Colts trailed or tied throughout. None of Hines’ touches occurred on third down. This trend continues after Mack began to run more pass routes per game than Hines at the end of last season. He also handled all third down work with Jacoby Brissett this preseason. With the backfield trending in Mack’s direction, he should improve on his 60.7-percent Opportunity Share from 2018.

Word out of Seattle this summer predicted Chris Carson handling feature back duties, with an increased role in the passing game. While Rashaad Penny mixed in for six carries on 26-percent of Seattle’s snaps, Carson cemented himself as the lead runner. In a back-and-forth game against the Cincinnati Bengals, he handled 77-percent of the offensive snaps and 21 total touches. This opportunity share included seven targets in the passing game. He remained efficient with these targets, reeling in six for 35 yards.

Seattle continued to run the ball at a top-five rate in Week 1 (49-percent), providing Carson a monstrous ceiling on the ground. He ranked sixth in the NFL with a 34.8-percent Juke Rate, showing the talent to create on his own.  He will be usable in all game scripts this season, with an increased reliance on the passing game.