The best fantasy gamers worship on the golden altar of volume, but efficiency metrics can still be helpful in identifying key players to target or avoid. To that end, fantasy owners are still not putting the proper weight on average target distance. Using data compiled from PlayerProfiler’s analytics database, average target distance tests as more reliable than other notable efficiency stats and metrics.

The easiest way to compare the reliability of different metrics year over year is to use R-squared regression analysis. It is a simple test that can determine how much of one sample is reliable year over year. Only wide receivers with at least 14 receptions were tested.

Using this form of analysis, average target distance is more than twice as “sticky” as either catch rate, yards after the catch per reception, or touchdown rate. These stats were important to compare as they form the entire life cycle of a passing play without being affected by volume or each other. From the moment the ball leaves the QB’s hands to the end point of the play, one of these four metrics track that play’s efficiency and resulting fantasy points scored. As the most stable of them, average target distance is an important measure of past success and future productivity. 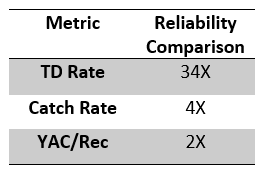 Here are a few examples of players whose market prices do not reflect their average target distance:

It is not news that DeSean Jackson made his mark in the NFL as a premier deep threat. What is impressive is how he is maintained that downfield dominance this late into his career. Jackson led this sample of receivers in average target distance in each of the last two years with respective marks of 17.3 and 18.9 average target distance. No one should expect enough volume for Jackson to return to his fantasy peak, but even a small increase will return at least WR3 end of year value.

Jackson should see that increase in Philly, where there is less deep target competition than in Tampa Bay. In best ball formats, he is a screaming buy near his current 206.89 FFPC ADP. For redraft and dynasty, he provides less value due to volatility, but could be a useful depth piece on the right team.

No one needs to be told that Julio Jones is good at football. And yet, after leading the league in targets and receiving yards, Jones’ ADP went down as compared to 2018. He also had a fantastic average target distance to support that elite volume production. At 14.2 average target distance, Jones is the only player in the Top 30 of last year’s sample to reach at least 90 receptions (and he had 113!).

He will eventually see age related decline, but this elite production and efficiency cannot be ignored. Jones should be in the top tier of drafted receivers and has the upside to be the overall WR1 in fantasy in 2019. Do not hesitate to pull the trigger on Jones at his 18.13 ADP in FFPC. He is also a buy in dynasty from any owner that is nervous about his age.

The case for Juju Smith-Schuster to increase his volume in 2019 is simple: Antonio Brown is no longer in town. Juju will get a chunk of the 26.7-percent target share that Brown is leaving behind. However, his 9.3 average target distance indicates that he is still not among the top tier of receivers. Juju was buoyed the last couple of years by unsustainable catch and YAC per reception rates that are due for regression.

Brown’s absence could hurt Pittsburgh’s entire offense or Smith-Schuster’s efficiency. With a 20.84 FFPC ADP, Juju does not possess the elite upside of other players drafted near him. He will only be a value if he slips 5-10 picks. The picture is less clear in dynasty due to Juju’s age. He will provide solid backend WR1 production for years to come and should only be sold for a godfather offer.

Adam Humphries ranked a respectable No. 30 in fantasy points per game last year, yet is being drafted at 174.94 in FFPC ADP. Coaches in Tennessee have told reporters that Humphries is going to be a featured weapon. At first glance, one could see upside in selecting him with a mid-round pick. That is conjecture and narrative. His dreadful 6.3 average target distance indicates that Humphries will not be relevant in fantasy again.

The only players able to retain value at that target distance are deceptive, agile athletes, such as Golden Tate, that can break off big plays after the catch. Humphries does not possess that skillset. Avoid him in best ball and use any dynasty shares to sweeten a deal for a superior player.