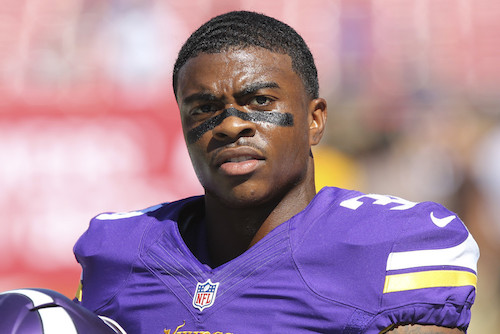 The end of the fantasy football season is here, although for dynasty leaguers, the fun is just beginning.  We love to encourage ‘buy high, sell low’ here at PlayerProfiler, but the buy-low strategy still carries some weight, especially when discussing the players listed below. Here are some buy-low candidates who were betrayed by their situation in 2016 but could provide excellent value in 2017.

Jerick McKinnon is the perfect example of a player betrayed by his situation. McKinnon possesses all of the physical tools necessary to succeed at the NFL level, posting a 110.5 Speed Score (89th-percentile), 134.9 Burst Score (96th-percentile), 10.95 Agility Score (92nd-percentile), and 155.7 SPARQ-x Score (100th-percentile). McKinnon’s 32 bench reps at the NFL Scouting Combine are the most by a current NFL running back. However, he was taking carries behind one of the most inefficient offensive lines in recent memory, and his schedule ended up being the most difficult in the entire league for running backs in 2016. This led to a -21.2 Production Premium, 66th in the league among running backs. There were a few bright spots, as McKinnon posted an 81.4-percent catch rate (8th), and posted 40 evaded tackles, which is impressive considering he barely had any room to run.

With dynasty football, the simple truth is that we can’t reasonably predict what Jerick McKinnon’s situation will look like in 2017 and beyond, which is why you need to acquire this talented runner right now, as his athletic measurables are on par with LaDainian Tomlinson’s and David Johnson’s.

Virtually no player was betrayed by his situation more than DeAndre Hopkins in 2016. Hopkins posted the fewest catches and yards since his rookie season, and his yards per catch (11.7) were the lowest of his career. He also ranked 139th in the league in Yards Per Target with 5.8, making him one of the least efficient wide receivers in 2016.

Helping DeAndre Hopkins become one of the least efficient wide receivers was Brock Osweiler, who posted one of the most inefficient seasons for an NFL quarterback of all time. Osweiler ranked 28th in the league in completion percentage (59.4-percent), 19th in Red Zone Completion Percentage (51.9-percent), and 35th in Deep Ball Completion Percentage (17.7-percent) and yards per attempt (5.7). Osweiler was brought in to be a game-manager, with the idea that he wouldn’t recklessly force the ball to Hopkins the way the Texans quarterbacks did in 2015, so it makes sense that Hopkins did not match his lofty 2015 statistics, but no one could have predicted this bad of a season.  Even after posting 12.2 fantasy points per game in his age-24 season, Hopkins is an entrenched top-20 WR position on the PlayerProfiler Dynasty Rankings.

DeAndre Hopkins has the most deceiving Catch Radius in the NFL.  Though 9.99 is technically below the 50th-percentile, Hopkins’ innate strength at the catch point and Spiderman-like hands enhance his ability to secure wayward throws.  Hopkins is simply too talented to assume that his 2016 statistics are the new norm.  Although Brock Osweiler is due to receive a ton of guaranteed money in 2017, don’t be surprised if he forces the Texans to move in a different direction if he doesn’t show significant improvement. Any kind of change at quarterback would be beneficial for Hopkins.

Jordan Matthews is a highly talented receiver who posted a 110.1 Height-Adjusted Speed Score (HaSS) (89th-percentile) and 123.3 SPARQ-x Score (91st percentile), but spent his third year in a situation where his team was breaking in a rookie quarterback, and the numbers showed. After a hot start that included 15 catches for 204 yards and 2 touchdowns over his first three games, Matthews looked primed for a third-year breakout. However, nagging injuries, the rookie struggles of Carson Wentz, and Doug Pederson’s conservative play calling severely dented Matthews’ production, most evidenced by his 7.2 yards per target (100th) and 561 air yards per target (27th).

Another receiver with an awful quarterback situation, Quincy Enunwa still managed to flash serious potential in 2016, posting a +15.5-percent Target Premium despite the Jets laughable quarterback battery. Enunwa posted a 116.3 Height-Adjusted Speed Score (96th-percentile) and a 41.7-percent College Dominator Rating (81st-percentile) despite playing in a horrible passing offense at Nebraska, and it’s unlikely that the Jets’ quarterback situation could get any worse in 2017.

Quincy Enunwa also posted an 88.9-percent Contested Catch Rate, showing that he could use his 6-2, 225 pound frame to his advantage. Turning 25 before the start of next season, Enunwa has proven he can be productive despite a low target share and a terrible quarterback situation, which only stands to improve. Now is the time to pounce.

Breshad Perriman might be the most intriguing player on this list, as he is an athletic freak, and finally got a chance to flash his potential despite a limited target share in 2016. Perriman posted a 4.30 40-Yard Dash (100th-percentile), 125.7 Height-Adjusted Speed Score (99th-percentile), and 125.6 Burst Score (74th-percentile), and it seems like he was making a highlight-reel catch every other week. Perriman posted 20.9 Yards Per Reception in college with a 36.6-percent College Dominator Rating, so he always had big play ability.

With Steve Smith likely to retire and Mike Wallace on a one-year contact, Breshad Perriman could conceivably be the number one receiver to open 2017 on a team that called 43.7 pass plays per game, ranking 3rd in the league. With his unmistakable athleticism, his ability to make plays down the field, and the fact that he is tethered to quarterback Joe Flacco, who made 71 Deep Ball Attempts in 2016 (4th), Perriman could be a beast next season.

Chris Moore is another talented Ravens receiver who may see a spike in opportunity next season. Moore, like Breshad Perriman, is highly athletic, posting a 127.9 Burst Score (82nd-percentile), 10.96 Agility Score (76th-percentile), and a 10.18 Catch Radius (82nd-percentile). Like Perriman, Moore also flashed big play ability at the college level, where he averaged 18.0 yards per reception (86th-percentile) despite playing in a passing offense that was above average at best.

Chris Moore only received an 18.8-percent Snap Share, but with Steve Smith and Mike Wallace likely to depart in 2017, the Ravens could have two beast deep threats on either side of the field with Joe Flacco chucking the football. There is tantalizing upside here, so if Moore can translate his big play ability to the NFL level, watch out.