Every year, James White falls down draft boards despite outperforming his ADP time and time again. He is the safest mid-round RB target regardless of draft strategy. PlayerProfiler’s advanced analytics show that he offers a safe floor with solid upside at his ADP.

He is the eternal value play

White has an FFPC ADP of 82.32, which currently makes him a mid-seventh round pick. The 2020 season will mark the fifth in a row that he returns value in fantasy drafts.

Let’s start with the obvious concern that Tom Brady is gone. New England is facing the largest quarterback drop off of the decade. This offense was better in 2019 than many people realize. The unit ranked No. 15 in yards per game, No. 8 in passing yards per game, and and No. 7 in points per game. Additionally, this unit enjoyed the second best Game Script in the league with a shutdown defense and an easy schedule.

This is a situation that screams regression for all players involved, but this fact is already reflected by 2020 ADPs. All New England players are being drafted at a reduced cost in all formats. White boasts good value in Best Ball and redraft based on his usage and lack of competition.

James White is an elite satellite back based on his receiving volume. 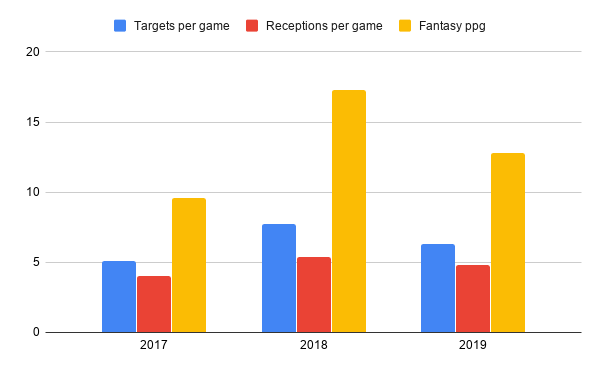 His 72 targets and 95 receptions both ranked No. 6 among qualified running backs in 2019, a significant decrease from 2018. Despite regression, he still finished among the top 24 players at his position in Fantasy Points per Game. Furthermore, his role in the New England backfield is secure with the personnel remaining unchanged from last year. The receiving room can improve if N’Keal Harry ascends, but White’s role is safe.

James White is guaranteed at least one third of the total opportunity in New England coupled with elite target volume. The icing on the cake comes from his Light Front Carry Rate. White saw Light Fronts a league-leading 83.6-percent of the time last year, up from a 56.4-percent (No. 4) mark the year prior. This matters because White is not efficient. In 2019, he posted 3.8 (No. 45) True Yards Per Carry , 14 (No. 65) Evaded Tackles, and a 10.1-percent (No. 56) Juke Rate. However, he did post 6.5 (No. 2) yards per target in each of the last two seasons. 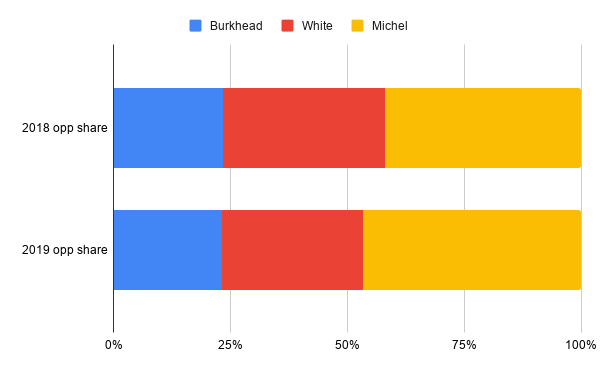 The high volume of passes with elite yards per target and a top-ranked Light Front Carry Rate tells us that Josh McDaniels knows how and when to deploy White. The metrics tell the story of a player who is crucial to his team’s gameplan and is often put in situations where he is most likely to succeed.

Go draft James White . Acquire him in every league. Make him your RB3 in every Best Ball draft. He’s a seventh-round pick who can guarantee weekly production at the running back position. He also has no significant injury history, having missed only two games in three years. At 28 years old, he will have no issues staying on the field. Whether going Robust RB or Zero RB, White should have a place on our fantasy teams. He’s a PPR monster and his role in this offense goes beyond Tom Brady’s tendency to check down. Whether its Brian Hoyer or Jarrett Stidham under center, checkdowns to White will be plentiful in 2020.